The SE edge of the Irish Sea Glacier 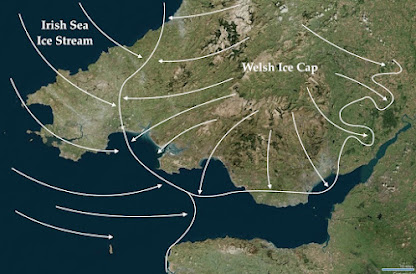 I have come to the conclusion that we have all been getting it wrong.  The edge of the Irish Sea Glacier in west Wales during the Devensian Glaciation or LGM was not wrapped around the Pembrokeshire coastline at all, but was much further east.  In fact, I now think that the whole of Pembrokeshire was inundated beneath glacier ice around 26,000 years ago.  This was all Irish Sea ice derived from far to the north, and from Ireland, but I'm still attracted to the idea that there was a stagnant or sluggish Preseli ice cap over the highest parts of the upland.

I have suggested this before, albeit with not much conviction.......

You can find many other posts by using the excellent search facility on this blog.

The ice edge maps in the literature are now so out of date, and indeed nonsensical from a glaciological standpoint, that they are best consigned to the dustbin.  Here are some of the dodgy ones (including some of mine!): 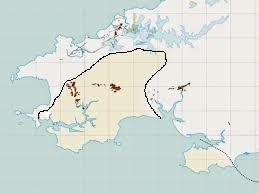 The BRITICE map showing the mooted LGM limit in west Wales, with the suggested ice-free area in mid and south Pembrokeshire and (in brown) the suggested pre-Devensian glacial deposits. 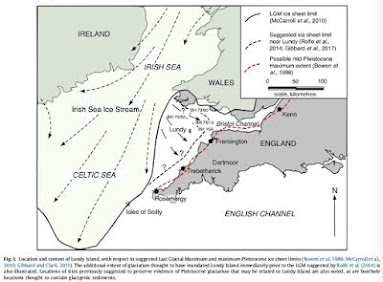 Carr et al, 2017 -- a map which inexplicably shows the Devensian limit in St Bride's Bay, in the vicinity of Rickets Head.  This is quite bizarre, as is the suggested ice flowline more or less parallel with the proposed ice edge to the west of Lundy.  Ice always flows perpendicular to unconstrained ice edges. 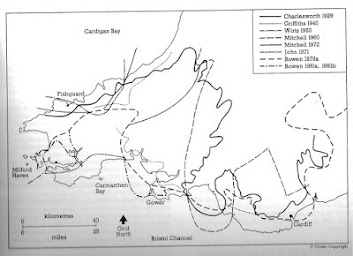 Some of the other limits to be found in the older literature...... 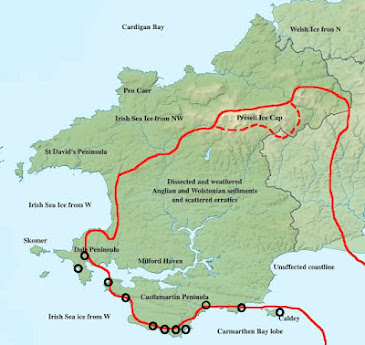 My attempt to modify the LGM limit in order to incorporate all the fresh glacial deposits on the clifftops of south Pembrokeshire. 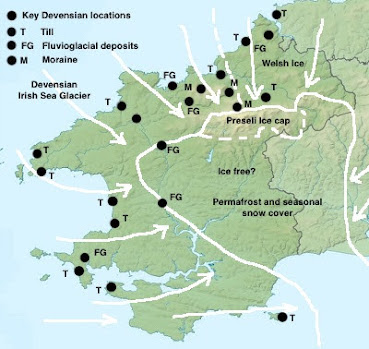 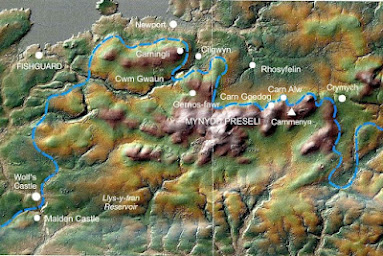 In blue, the Devensian limit as suggested by the BGS, and as printed on the geological map for the area. Parts of this seem quite accurate, but I'm now convinced that in the west, it is wrong. 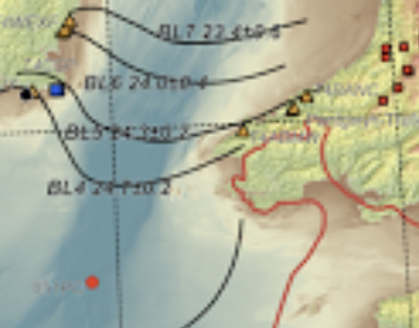 On this map Scourse et al (2021) have accepted my evidence from South Pembrokeshire (including Caldey Island) without acknowledging or citing it, and have reproduced my line.  That was a bit careless of them........... but they have my forgiveness.  I now think that the Pembrokeshire ice free enclave does not make sense.

So I no longer believe that there was an ice-free or permafrost enclave over central and eastern Pembrokeshire at the height of the Late Devensian glaciation.  And the reasons for my change of opinion?
The evidence:
1.  There are far too many spreads of glacial and fluvio-glacial deposits in these areas deemed to be outside the LGM limit.  Some of them, at least, appear quite fresh, and some even have surface expression.  They are by mo means all "degraded or denuded" and are by no means restricted to hilltops or interfluves, as claimed by some.
2.  The glacial deposits in the valleys and on the clifftops of South Pembrokeshire are so abundant and so fresh that they have to be Devensian.   The exposures are itemised on this blog.  I now think that there are glacial deposits around Amroth and Marros as well; and these are best explained by ice pushing down from the west and the north, and not from the south. 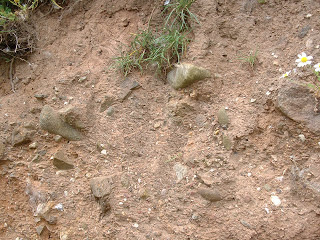 Reddish till exposed at Ballum's Bay, Caldey Island.  I do not accept the interpretation by John Hiemstra and others that this is a redeposited ancient till.
3.  The glacial and fluvioglacial deposits around Picton Point and Landshipping, right in the centre of the county at the confluence of the two Cleddau rivers, cannot adequately be explained without invoking a complete ice cover across Pembrokeshire.   I have another report of fresh till near Haverfordwest.
4.  Over and again I have described on this blog glacial deposits and apparent trimlines at a variety of altitudes on the northern side of Preseli, up to an altitude of 340m.  It looks to me as if that was the altitude of the highest Devensian ice surface associated with Irish Sea ice.  If the ice covered Carn Ingli and pressed onto the northern flank of the Preseli ridge at that altitude, it would make no sense for the ice edge to be at or near present sea level around the mid and south Pembrokeshire coast.  Ice must have filled the Cwm Gwaun depression, and indeed I have described apparent morainic features above and on the south side of the meltwater channel, and at Cilgwyn and Tafarn y Bwlch.  Nor does it make any sense for an ice edge to be parked around the 200m contour in the vicinity of Wolfscastle and Letterston, as suggested by the BGS.  If the ice was coming in from the NW, it MUST have inundated the whole of Pembrokeshire to the south of Preseli, according to the laws of ice physics.  The ice edge might have been slightly lower on the southern flank of the Preseli ridge.  I now think that the assorted morainic ridges and glaciofluvial mounds in and around the Preseli uplands may be associated with retreat stages or short-lived readvances -- still to be defined.
None of this eliminates the possibility that there are Anglian or Wolstonian glacial and meltwater deposits in the area previously designated as an ice-free enclave.  As indicated on this blog, I think there are ancient glacial deposits at Ceibwr, Witches Cauldron and Black Mixen, Lydstep; and Prof Danny McCarroll and I are rather convinced that glaciofluvial gravels exposed at Llangolman may well be very old indeed. There is plenty to keep us occupied.
So there we are then.
=================
PS.  This is a somewhat relevant post, on the footprint of the Irish Sea Ice Stream:
https://brian-mountainman.blogspot.com/2020/10/irish-sea-ice-stream-footprint-2.html
PPS. What has all this to do with Stonehenge and the bluestones? Quite a lot, actually. This is from an earlier post, with a little modification:

Recent work on the glaciation of the Celtic Sea shelf by the Irish Sea Ice Stream has shown that the Devensian ice surface gradient was exceptionally shallow, dropping from +750m in the Irish Channel to +400m in St Georges Channel to -200m at the southernmost ice edge about 500 km away. That represents a surface drop of about 1000m over a distance of 500 km -- or 2m per km.  There must have been substantial lateral spreading and gradient reduction on the ice surface once it was clear of the constriction between North Pembrokeshire and the coast of SE Ireland. It was proposed by Prof Geoff Boulton many years ago that this was because of the soft and saturated sediment bed on what had been the sea floor, facilitating a high rate of bed deformation, lubrication and basal sliding. This has been confirmed by subsequent work by James Scourse and the BRITICE team. So could the ice from the west have surmounted the chalk escarpment on the edge of Salisbury Plain? Since the Plain has a surface altitude of 200m-250m, an ice front capable of surmounting the chalk scarp must have had a surface altitude of c 300m. That could not have happened in the late Devensian glaciation, but it would have been perfectly feasible in the Anglian, at a time when the whole of Preseli must have been deeply inundated by ice, with a glacier surface at c 750m. The soft sediments of the Somerset Levels would have facilitated ice movement eastwards from the Bristol Channel.  The drop in the surface of the ice lobe would have been 450m over a distance of 280 km -- namely 1.6m per km.  That's a reasonable ballpark figure, given that the deforming sediments in the Bristol Channel must have been very similar to those of the Celtic Sea, in both the Anglian and the Devensian glaciations, leading to a very similar style of glacier behaviour.  I will look at this topic again, in another post.

Charlene asked me if my conclusions really are inescapable! Well, I think they are -- but others may disagree. Let's we where we go with this...... at least I can't be accused of being stuck with a ruling hypothesis, because my ideas in the past have been (as I now think) just as far adrift as everybody else's......

Interesting.... every winter I collect middle Jurassic fossils at Tonfanau (N of Tyuwyn) after storms have liberated new boulders of Great Oolite from the drift there, clearly from the floor of Cardigan Bay, there's so many of them. The Irish Sea Till there overlies the Welsh Till, which can be examined on the foreshore after sand has been scoured.

it makes perfect sense for there to be a Welsh till beneath an Irish Sea till dating from the same glaciation. Local ice develops first, and spreads out into Cardigan Bay -- and then a bit later along comes the seriously big glacier, trundling down from the north........ in some locations we might also expect another local till on top of the Irish Sea till, since "pulses" of Welsh glaciation might have interrupted the general pattern of catastrophic ice wastage as the Irish Sea Glacier edge retreated northwards.

Sounds reasonable to me. Holler if you are ever up this way and want a look.