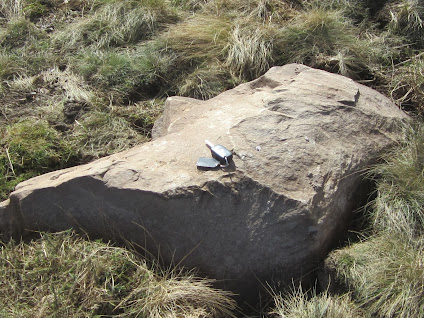 The new recumbent monolith at Waun Mawn.  A fallen standing stone, or just a lump of glacially emplaced unspotted dolerite?  We shall see......

This is the second brief report on what is now visible to passing ramblers and lost circle hunters, following the conclusion of the 2021 digging season by MPP and his "Stones of Stonehenge" team.   The first report is here:

This year, the team implied (in its application for consent) that only a small area would be excavated, with highly targetted small excavation pits opened up with a view to answering quite specific research questions.  On the map submitted only four small areas were identified for excavation trenches: 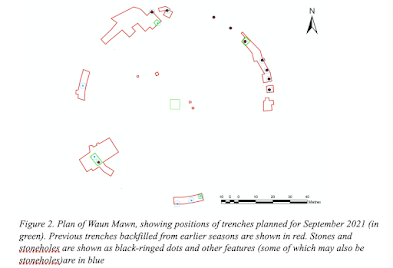 To me, this looks like around 50 sq m of excavations.  When I walked over the site yesterday, I was staggered to find that there were at least eight new excavations (some of them very large) and several "revisits" to previously excavated areas, where old turves have been lifted and then re-laid.
There has been much activity on the western segment of the "circle circumference", with five digging locations with the following approx dimensions: 2m x 2m; 10m x 20m; 20m x 20m; 5m x 2m; and 5m x 5m.  In the fourth of these excavations, moving southwards or anticlockwise from the NW recumbent stone, a new boulder has been lifted and left exposed, presumably because the diggers have interpreted it as another recumbent or fallen monolith.  No doubt we will hear more about this in due course. Other smaller boulders are also now exposed at the surface, which means they have been removed from their original positions in the glacial till spread.
In the centre of the putative 100m diameter "lost circle" it was the intention to look for a post hole used with a rope or line for marking out the circle circumference, or else for an empty socket or recumbent "central pillar".  If any big stone had been found, it would have been left exposed -- but we await further information on what was discovered.  But the excavation here was not a small one -- it was a big and very messy one with dimensions c 8m x 8m.
There was another big and messy excavation on the eastern edge of the imaginary circle circumference, with an area of c 10m x 10m. I imagine that this dig was done in association with the work of Clive Ruggles, looking for stones or sockets of significance for astronomical alignments.  A lot of stones were collected by the diggers and left behind in a pile under a gorse bush. 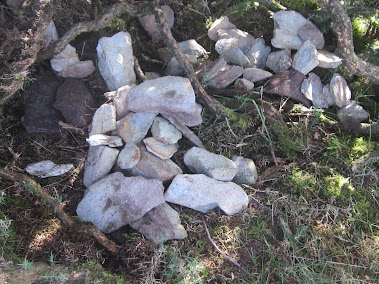 Stones collected by the diggers.  Mostly locally derived volcanic ash, rhyolite and meta-mudstone.
The last of the excavations for this year was about 2m x 2m in extent, adjacent to the small broken recumbent stone in the NE quadrant.
So the total excavated area this year was around 807 sq m -- considerably greater than the previous digging season.   For comparison, this is what happened in 2018, when 700 sq m were excavated, including 160 sq m "accidentally dug" over and above the total originally notified to NRW:

Let's assume that the vast expansion of the digging area in 2021, over and above what was in the original project plan, was done in close cooperation with the National Park and NRC.   If this was all done without authorisation, we have a problem.  Or rather, MPP has a problem.

So no big stone has been found at the "circle centre" and the only substantial stone unearthed is in the SW quadrant.  To me, that looks like a glacially emplaced boulder, but the diggers will no doubt have hunted beneath it to see if there are any dateable organic remains.  Watch this space.........

One further point regarding rock types -- I have again spent a fair amount of time looking at rock fragments and boulders, and have seen no trace of any spotted dolerites.  So I am as certain as anybody can be that nothing from Carn Goedog has been used here, and that any large stones set into the ground have been locally derived unspotted dolerites.  The basic and frequently occurring rock types are Abermawr shale, meta-mudstones and meta-shales altered by igneous activity, rhyolites, volcanic ashes and unspotted dolerite of several types. There may be some sandstone fragments too.   I have not seen anything that looks as if it might have come from Rhosyfelin.

So how do we explain this sixteen-fold increase in the size of the 2021 digging area, as compared with what was planned?  Well, it looks as if nothing of much interest was found -- if that assumption is wrong, I will correct it when I get more feedback from MPP's brewery talk on 14 September.  We already know about interpretative inflation -- I think what we have here is a classic case of "excavation exasperation" in which the diggers, having initially not found what they were looking for, just kept on digging till they all ran out of steam.  They were so desperate to find something -- anything -- that would provide validation or confirmation for the "lost circle" hypothesis that they forgot all about their original research design and went for broke.  That's the way I see it.

For the time being, or until some evidence appears from somewhere, let's just refer to this one as the "desperation dig".

It will be interesting to hear how much preparation for pollen analysis has taken place this Season of digging. Much hyperbole occurs within the Stonehenge: Exploring....2012 book in MPP's chapter21, where he waxes lyrical about unification, possible mass migration etc. I seem to recall him saying pollen analysis on a statistically significant scale was in his plans when he spoke in November 2020.

I suspect that there has been a lot of sample collecting for both pollen analysis and radiocarbon dating. The identification and dating of the so-called "thousand year hiatus" seems to be a key part of the narrative. Strange to recount, Darvill and Wainwright, in their big chapter in the Pembrokeshire History book, saw no sign of any such thing......

UCL seems to be very into what they call "disruptive thinking" across all departments. I thought that was OUR department, so I'm stunned. Searching for a thousand - year hiatus may lead to a hernia, minimum.

Ah yes, disruptive thinking. Personally, I think they should concentrate first on the thinking bit, and get that sorted, and then in a century or two they can get onto the disruptive bit.