News from the Magic Quarry 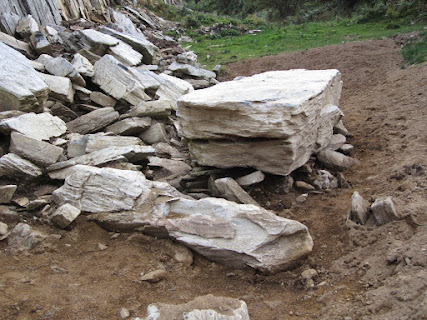 A few days ago I did a post about the Rhosyfelin Family Planning Clinic and the big "fertility stone" that was left behind when the Neolithic family planners all died out. You thought I was joking, didn't you?

Well, I have been getting more details from some of the local residents, who are very concerned about the numbers of visitors turning up to inspect the site in spite of the facts that (a) it is on private land, and (b) there is no adequate parking for visitors. I’m still checking on what has been happening, but the National Park has also been concerned about people collecting lumps of "magic" or powerful rock from the exposure, and I have seen for myself that chunks have been knocked off visible exposures. I have heard from two directions that "river hunters” have been working their way along private stretches of the river. Visitors have arrived to "sing to the stones” and to "break bread with the ancestors.” The gate leading to the excavation site was left open by somebody, allowing grazing ponies to escape onto the lane near the ford.

Apparently the majority of the visitors to the rocks are under the assumption that ALL the bluestones for Stonehenge came from this site. This mistaken impression comes largely from very influential TV programmes.
There are “quality of life “ issues here for all of the local residents, and they may choose to speak for themselves, but nobody wants the police involved, and the NPA has taken the initial step of putting a small sign put on the gate near the ford, reminding visitors that it is a criminal offence to take away lumps of rock.

And note this -- every single visitor to this site, no matter how deluded /misguided he or she may be, does very effective free marketing for the quarrying myth. That is exactly as intended.

So this is most definitely not funny any longer. For a decade I have been warning of the consequences of "selling" this site to the media as a site of European and even global importance. The bulk of the blame lies fairly and squarely on the shoulders of the "Stones of Stonehenge" team -- both archaeologists and geologists -- for spreading the myth that this is the location of a "bluestone monolith quarry" involved in the export of monoliths destined for Stonehenge. Over and again since 2012 they have used the media to trumpet their "astonishing" discoveries to a gullible world, and over and again newspapers and magazines have regurgitated the contents of carefully-fashioned press releases without ever asking themselves how reliable anything put out by MPP and his colleagues actually is. The latest TV docu-drama involving MPP and Alice Roberts is just the latest in a string of thoroughly dishonest and vacuous broadcasts.

I think that this beautiful site has been comprehensively abused by the archaeologists and the geologists too -- but that is another matter.

The authorities do not get away scot-free either. Their behaviour has, in short, been indecisive. The National Park, Cadw, Natural Resources Wales, and Dyfed Archaeology have all allowed themselves to be dragged into the maelstrom of bad science, confirmation bias, the weaving of fantastical myths and media manipulation -- not to mention the "invention of evidence" which my scientific colleagues and I complained about in print in 2015. Key organisations have promoted the myth that this is a quarry on their own web sites and in their own publications, sometimes for their own commercial ends. MPP has been given star treatment in the National Park's Archaeology Day year after year, with the result that there are now thousands of people out there who hang on his every word and who believe that "if he said it, it must be true."

So connivance from officialdom has also helped in the spreading of the quarrying myth -- again exactly as intended.

I'm rather convinced that nobody from any of the above listed organizations has carefully read and scrutinized the three "Antiquity" articles that purport to present the research results for Rhosyfelin, Carn Goedog and Waun Mawn. If they had, they must have recognized that all three papers throw all of the conventions of scientific writing out through the window, and mix up evidence and assumptions to such an extent that NOTHING can be trusted. They must also have noticed that the authors of the 3 papers have steadfastly refused to present any inconvenient evidence, and have steadfastly refused to cite any research articles that draw conclusions that are opposed to their own. A refusal to cite inconvenient research is a warning signal so large that you are bound to notice it. And if you notice it and still accept the findings of the work in question, shame on you.

This is a scandal that has gone on for long enough, and it is now impacting on the lives of innocent people.

PS. It's been pointed out to me, with great glee, that in a discussion thread on access to bluestone sites, on TripAdvisor, in 2016, I said that Rhosyfelin was "a very pretty site, well worth a visit." Do I now regret saying that? Yes, I do, even though others on the same thread were saying the same thing. I have said similar things about all of the tors of Pembrokeshire and about scores of beautiful locations on the Pembrokeshire coast and inland. I want tourism to be spread widely, and not concentrated into honeypots. Hindsight is a wonderful thing, but five years ago I thought Rhosyfelin might see a handful of visitors per year, just enjoying the landscape of the Brynberian gorge and wandering along the public footpath. That was naive of me. I had no idea that it would be marketed so aggressively by MPP and his team as a site of international importance and possibly spiritual or ritual significance, using all the media opportunities (including TV documentaries) that came their way. My colleagues and I fought hard to prevent the site being registered as an Ancient Monument, and we succeeded in that. Sadly, we did not do enough to prevent it being flagged up as being of huge significance in the Stonehenge story. We should have fought harder.

Dear Brian and Inga.
Thank you for showing me around your bluestone museum and what little remains of Inga’s candle museum, since her retirement from it.
I went looking for MPP’s lodgings but could not find them, so spent the night in Goodwick, near Fishguard, before returning home the next day.
The result of chatting to one Goodwick resident over a pint was quite revealing…
What does the “Stig,” “Banksy,” and “Stonehenge” have in common? Answer -- They’re contrived mysteries. Aided and abetted by universities and the media, all three are confidence tricks. If you want to know who and what they are - ask their bank managers!

Agree with Tom......similar to the contrived mysteries here, there, and everywhere (which, by the way, was a song written by The Beatles, known earlier as THE QUARRYMEN, ironic isn't it ..?) I might draw a comparison between Pearson's version of 'The Truth' and the on - going rabid argument especially in the USA between "vaxxers" and "non-vaxxers". The New York Times has just printed an article in which the writer says some anti-vaxxers are encouraging the sale of dubious 'Rebecca's he terms "snake oil".

Thanks for letting us know about the residents concerns Brian. I'd planned to walk past there on a walk to Beddyrafanc late next month for no other reason than to see it but will now avoid and maybe drive past for a quick look another day.

Grahame: There is a very good public footpath that runs through the gate fromm the lane past Craig Rhosyfelin and along the river. This path should be used. The occupants of the cottage object to people detouring from the path and milling about the rock face on their own wild goose chase.

Sadly the footpath to the north of Craig Rhosyfelin is completely overgrown, neglected and unpassable. There is no stile, no finger post and no evidence of this second path from the lane.