Stonehenge for the Ancestors -- Vol 1 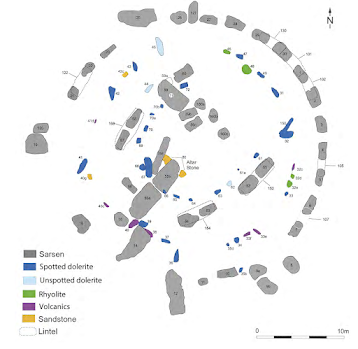 I have drawn attention to this book before:

I have also flagged up the fact that the excellent people at Sidestone Press have made the book available for free online, so that we can all delve into it at our leisure. You can get at it via this link:

For those of us who ponder on the matter of the bluestones, Chapter 4 (p 165) by Mike Parker Pearson and Colin Richards is the place to go to. The gorgeous map (duly acknowledged) which I have reproduced at the head of this post tells us where the bluestones are, and which types of rock they are known -- or assumed -- to be.

This book chapter is quite responsibly written, and is not as seriously damaged by speculations and assumptions as the articles on Rhosyfelin, Carn Goedog and Waun Mawn that have been written by the MPP team. Nonetheless, there are plenty of questionable assumptions lurking in the undergrowth.

The authors are very insistent that the Aubrey Holes held bluestones, and that the bluestones arrived on Salisbury Plain at the beginning of the third millennium BC -- in plain English, that means about 5,000 years ago, in Stonehenge Stage 1. Keep that date in mind..... They think that this first stone setting was in position even before the creation of the ditch and bank, which followed around 4.900 years ago. They say the stones were used in an undressed state, since no stone chippings from this earliest phase have been identified in material excavated from the primary or secondary fill of the ditch. (see Cleal et al, 1995 -- of which more anon......) They also say that the large quantities of chippings in later fills and contexts at Stonehenge point to dressing on site, or even to the destruction of bluestones in post-Neolithic times.

As pointed out before on this blog, they look at the "Boles Barrow bluestone" on p 176, and say it was "erroneously attributed" to the Barrow. That matter is by no means open and shut........

They also claim that the bluestones were taken from the Aubrey Holes and stored somewhere before being re-used in the Q and R holes around 4,700 - 4,500 yrs BP.

Section 4.1.4 on p 177 is an interesting summary of the other bluestone fragments found in the Stonehyenge landscape. We have covered this in a previous post. Then there is a section on Aubrey Hole 7, and the material found at its base. There has been much discussion on the cremated remains and on the significance of the "crushed chalk".......... On p 191 the authors refer to 15 geological groups found in the bluestone assemblage at Stonehenge, and emphasise the abundance of foliated rhyolite, spotted dolerite and unspotted dolerite, pretending that the collections of fragments obtained from past digs are fully representative of the bluestone litter or scatter across the whole site.  This assumption was not accepted by Cleal et al in 1995, and it should not be accepted by anybody else either.  We will ignore the strong bias relating to monolith quarrying on p 192.

The investigation into the origins and dating of the bluestone fragments (mostly rhyolite) around Fargo Plantation is worth reading (see p 193). 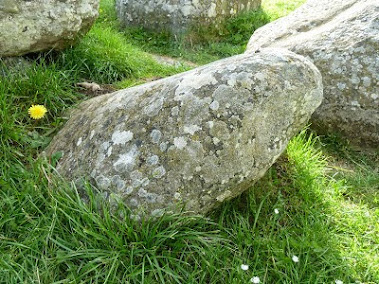 On p 213 there is speculation about the round undressed stones  -- boulders and slabs for the most part, although the authors cannot bring themselves to admit this.  They suggest that the stones of the outer circle had a longer life in the Stonehenge landscape than the shaped bluestones of the horseshoe -- and they are inclined to think that the rough bluestones (clearly not quarried) came to Stonehenge earlier than the horseshoe bluestones, which might have come from the "bluestone quarries" like Rhosyfelin and Carn Goedog.  Having investigated the possibility that there was an old bluestone setting near Fargo Plantation, and having decided against that, they suggest that bluestone monoliths might have been used in other settings in the landscape, and maybe not always at Stonehenge itself.  This is where "Bluestonehenge" comes into the frame -- but we won't go there today. 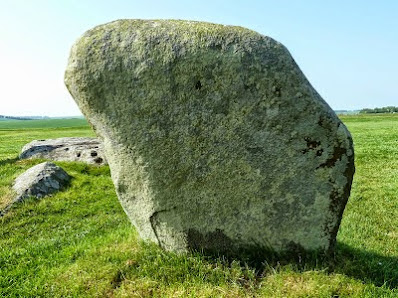 And this is interesting: on P 215:   ".......in our analysis the impression given is one of near-disorder.  In this final form, the arrangement of the Stonehenge bluestones, particularly the outer circle, appears more as a collection of stones with little regard to the creation of a megalithic architecture predicated on lithology, biography or source."

At last, something we can all agree on!!!  The use and the settings of bluestones within the Stonehenge landscape was little short of chaotic, indicative either of indecision or frequent changes of strategy, or (as I have been arguing for years) determined by the simple fact that there never were enough stones.

Finally in this chapter, on p 214, there is an admission that there are other sockets and possible locations on Salisbury Plain where bluestones might have been used during the Neolithic if not in the Bronze age.  On this last page of the chapter Parker Pearson and Richards go into a convoluted explanation of the relationship between West Wales and Stonehenge, with the "quarries" featuring large. They end up in a perfectly frightful tangle.   Sadly, they are so preoccupied with their ruling hypothesis of an "arrival date" (or maybe several arrival dates) that they are completely blind to the blindingly obvious.

The stones were there all the time, just waiting to be used here, there and all over the place, depending on the fashion of the time.  It's all explained in my book, which maybe the authors have not got round to yet.   None of their evidence contradicts this thesis.   Most of the bluestones (apart from those in the bluestone horseshoe that have been fashioned)  look like glacial erratics, feel like glacial erratics, and taste like glacial erratics, and it is quite extraordinary that this is something that the authors of this chapter cannot even bring themselves to consider.  It's enough to make one want to tear one's hair out.........