Oxford Gletscher and the discovery of surges 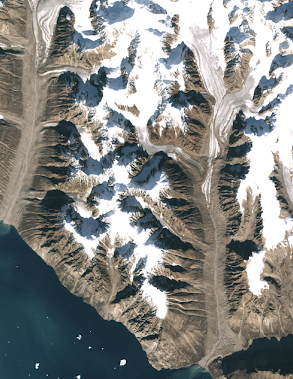 This is a fabulous new satellite image of the north shore of Nordvestfjord in East Greenland.  The valley glacier trough on the right is the place where Dave Sugden and I did our first bit of glaciology in 1962.  We slogged all the way up to the confluence between the two glaciers, man-hauling a heavy sledge laden with drilling equipment across brittle ablating ice until we got caught in a blizzard around the firn line.  We camped close to an icefall which showed that the glacier on the right was much more active than the one on the left.  We should have realised that that was a sign of surging -- but nobody knew anything about surges back then. 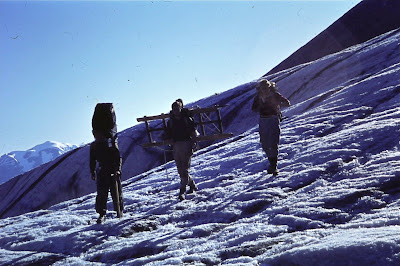 Trekking up Oxford Gletscher on the way to the research area, 1962. 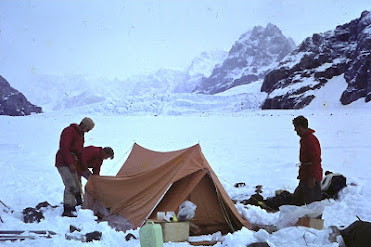 Camp site on Oxford Glacier in 1962.  Icefall in the middle distance. 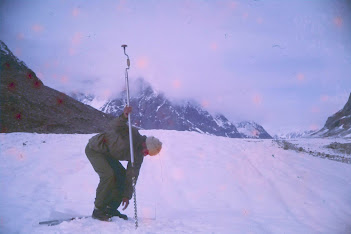 Our colleague Svend Wurm with the drilling eq
uipment. 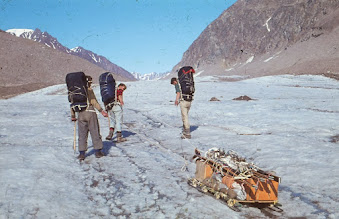 Man-hauling on Oxford Gletscher with our home-made sledge.

When we drilled into the ice we were trying to find out whether the glacier was warm-based or cold-based --  but we never had any hope of drilling through to the bed.  Our hand-drilling equipment was far too primitive for that.  We never got any deeper than 15 ft before the drill got stuck and had to be extracted!!  When we started to measure ice temperatures, using a thermocouple device designed and built by our friend Brian Hughes, the readings were chaotic.  We expected them to be rising gradually with increasing depth, but in the 17 drill holes all the temperatures fell with increasing depth, with the ice near the surface always above zero degrees C and with the zero point encountered at a different depth in each hole.  We decided that the instrument was faulty, swore at the maker, and did no further measurements.  Only afterwards did we realise that we had discovered a surging glacier.  When a surge is taking place, ice from one tributary overwhelms the ice from elsewhere, and the glacier becomes layered, with each layer retaining some of is pre-existing thermal characteristics.  But nobody knew that in 1962............
So in its own way, our very naive and chaotic research was actually quite important.  So when we suggested to the Danish Geodetic Institute that the glacier might be named Oxford Gletscher, the authorities gave it the stamp of approval. Citation:
"Oxford Gletscher 71Ø-369 (71°32.8 ́N 25°16.7 ́W; Map 5). Glacier in the south Stauning Alper, draining south into the east end of Nordvestfjord. Named by the 1962 Oxford University expedition, which undertook survey work on the glacier. Oxford University is one of the world’s oldest and most prestigious universities, whose origins go back to the early 12th century. Uranus Glacier has also been used."
In the satellite image at the head of this post, you can see from the pattern of moraines that the right-hand glacier has "squeezed out" the one on the left -- a sure sign of surging behaviour.
================
PS.  I came across this interesting account of a mountaineering expedition of 4 men who trekked from Mestersvig to Syd Kap in 1976.  The route included a very difficult section walking down Oxford Gletscher from its highest col down to the snout.  From this account, the chaotic ice surface encountered MUST indicate that the glacier was surging at the time.
Traverse of the Staunings Alps — KJ Miller, Alpine Journal 1976, p 143-153.

From the pass we descended the right-hand side rib and scree to the snow where we strapped on our snow-shoes. Our route down the Oxford glacier was on the left-hand side of the rognon. Now came the sting in the tail of the traverse.

None of us could make sense of the crevasse patterns which were wide, deep, well concealed and in a variety of orientations. It was Chris and John with their smaller snow-shoes who always found the unstable and unseen snow- bridges. On one occasion they were in different crevasses while Jim and I were on unsure gound. We descended at a snail's pace. It was both frightening and strangely enjoyable perhaps because we felt aware that nature was giving a last reminder of how insignificant man was compared to its power and beauty. Continuing on down to the chaotic ice-pools and several melt streams we eventually and thankfully came to the ice surface. After a couple of hours of pleasant going the surface became a conglomeration of steep ice- hummocks, separated by streams and chasms. This terrain forced us on to the left bank moraines and in retrospect, we made the mistake of not returning to the narrow ice-stream of the glacier beyond the disturbance. The moraines were long and unconsolidated and gave no sign of becoming easier. After 14 hours, we bivouacked on the moraines and decided to revert to day-time travel. It was a foggy night and due to the dampness no one slept well. At 11.00hrs we continued the moraine struggle which was to last another 3 hours.

Approaching the tundra we saw 2 orange tents pitched on the far side of.the melt river. Presumably the members of the Scottish Scoresby Land Expedition had successfully induced the Scoresby Sund Greenlanders to boat them up Northwest fjord. We could not cross the river, and heliograph signals failed to attract their attention, so sadly we pressed on.

Soon the moraines were behind us and we were on tundra, walking from bank to bank of bilberry bushes. The scene was one of indescribable beauty. Huge icebergs drifted in the fjord and before us the first of the Holger Danskes Briller lakes curved around the feet of the mountains which formed a
gorge. We gloried in green hillsides, streams of clear tundra water and soft resting places. Leaving the last glacier behind us we moved up the lakeside and camped on old flat-topped moraines beside a glacial outwash delta. A small fire from dead woody willows dried out our kit. Up to this point it had only been necessary to pitch tents at 3 stops. Here we erected them to keep out the early morning fog which rose from the fjords. Next morning we crossed the delta between the 2 lakes rather rapidly since we were followed and then chased by a musk ox. Our retreat from the beast was undignified but after previous experiences, I did not wish to negotiate our infringement on his territory.

Feeling the need to have a substantial meal and a further drying out session, we made haste to the dump I had helped to prepare in 1973. This provided us with hamburgers, biscuits, jam, beer, Mars bars and many other delights. Refreshed, we climbed the hillside S of the lakes and walked down the gently sloping plateau to the river feeding the inlet behind Syd Kap. Close to the inlet we traversed across to a small lake which nestled between 2 hillocks. In the lake were small fish and on the banks we saw hare and arctic fox. A few minutes later, we had descended the last hillside and had arrived at the huts of Syd Kap. Chris cooked a meal fit for kings. Jim's hands, after a course of penicillin tablets, were improving. John was so happy he would have been prepared to amputate his feet. I was delighted to be in this idyllic place once again.
Posted by BRIAN JOHN at 00:26