An apology to Prof MPP and his team 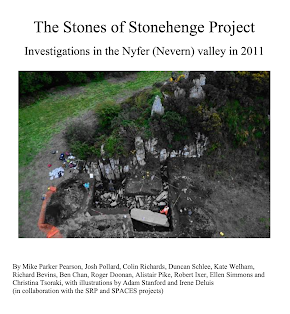 This report actually exists.... as do several others.....

Apologies cost nothing.  As readers of his blog know, I am always happy to apologise if I say something that is wrong.  So this is an apology to Prof MPP and his colleagues for accusing them, over and again, on the blog and in correspondence, of not writing and publishing any research diaries or interim field excavation reports between 2011 and 2016. (There are reports for 2017 and 2018, which we have already examined and discussed.)  I also accused them of falling short on academic standards and of preventing pre-publication scientific scrutiny of their work, by failing to place in the public domain any material that could be scrutinized or peer-reviewed, given that excavation pits are always filled in, thus preventing independent examination of the evidence due to be presented in print at some later date.

That latter point is still a valid one, but on the "interim report" issue I clearly got it wrong, since I have now been able to obtain from Dyfed Archaeology and the Archwilio "Historic Environment Record" the PDF versions of six brief "interim reports" of the fieldwork at Rhosyfelin, Carn Goedog, Waun Mawn and elsewhere for the years 2011 - 2016.  They are not yet technically "archived".  These reports are not accessible via any searches via Google, on the Archwilio web site, or on any other website such as Coflein, Cadw, UCL or RCAHMW.  They were published but not available, if you see what I mean.........

On innumerable occasions over the last decade, members of the research team were given opportunities to inform me about the existence of these reports, but declined to do so.  Maybe they were sworn to secrecy or instructed not to communicate?

Anyway, I obtained the documents by specifically asking for them, having tracked them down via one agency after another.

So I am sorry about my mistake and hope that my apology will be accepted.

As for extenuating circumstances, they are rather numerous, but I will leave those for another post.

Make sure ALL their reports are deposited in the National Library of Wales please..........!!

They will all be deposited with RCAHMW for the official archive -- but WHEN? That is the question........

Last time I checked, Professor Pearson was taking a Sabbatical from his teaching role at UCL for the Autumn term. One supposed he will be devoting some of the time to his digging team's efforts at Waun Maun and nearby. His Preseli work all falls under the umbrella of the Stones of Stonehenge Project, shared with other Universities.