When is a boulder sufficiently erratic to be an erratic? 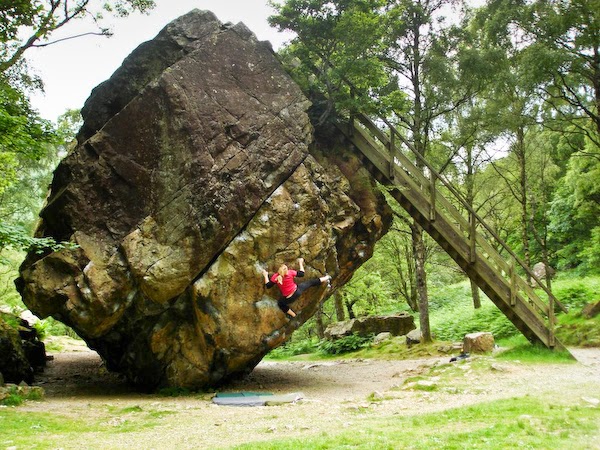 I got an interesting query from Andy Burnham on the Megalithic Portal on the subject of the Bowder Stone in Borrowdale near Derwentwater in the Lake District.  It's balanced, apparently very precariously, on one corner.  Somebody had asked whether it could be a glacial erratic (a very big one!) brought down on a glacier from Scotland.  In the  literature there does seem to be some disagreement -- some authorities refer to the massive boulder as local in origin, and others say it is from far away.  Wikipedia says: "The Bowder Stone is a large glacial erratic in Borrowdale. Cumbria, England at grid reference NY25401639. It is estimated to weigh around 2000 tons and is about 9m high, 15m across and 27m in circumference. There is a staircase allowing visitors to climb to the top, and has been since at least 1890."

I have also seen the stone referred to as "the largest standing stone in England" -- but that is nonsense, for it is clearly not an "orthostat" or pillar and it has no archaeological significance.

I did a bit of digging about, and this was my reply to Andy:

In the Anglian Glaciation, ice from the Southern Uplands must have flowed right across the Lake District, so the transport of large glacial erratics would have been possible. However, it's more uncertain what happened in the Devensian (last) glaciation. Probably there was an ice dome over the Lake District, with radial flow. That having been said, it sounds to me as if the Bowder Stone is made of local volcanic rocks that are found in the vicinity. I found this: "An alternative theory to the Bowder Stone is that it was deposited as a result of a rock fall from nearby crags. There are no abrasions on the rock which would be expected if it were to have been carried by a glacier and the rock is the same rock type as that found at the Hells Wall area of Bouder Crag nearby. The Bowder Stone is a fine grained, Andesite lava rock which was created during the Ordovician period. This has been concluded from its composition of between 65-50 % silica. It is therefore c. 4 million years old and is probably part of the Borrowdale volcanic rock group." The rockfall idea seems reasonable to me! Remember that at the end of a glacial episode one gets a lot of "pressure release" on mountainsides, and it would not be unusual at a time of ice melting for big rockfalls and even landslides to occur in places like this.

Below is a rather sensible description from the Geocaching web site:

Debate has focused on the geological reasons for its location. Two possible origins have been considered: that it was transported by ice and it is a glacial erratic boulder, OR it fell from the crags above. However the theory that it is a glacial erratic cannot be proven or disproven, there is no evidence that ice from Scotland ever penetrated the Lake District and the stone itself is a piece of Lake District volcanic rock, possibly from nearby Bowder Crag. Ice travelling down Borrowdale from the high fells could have brought the boulder but the Bowder Stone shows no signs of abrasion typical of glacial transport. Also, it is located in the Jaws of Borrowdale, where the valley narrows. Glacier movement speeds up in constricted areas and under such conditions glaciers are more likely to transport boulders rather than deposit them. [BSJ comment:  that's only partially true.  Yes, ice speeds up and erodes more deeply in trough constrictions, but that has no bearing on what is left behind.  When a glacier dies, it dies, and whatever it is carrying will be dumped, close to where it was in the glacier at the time of death!]

There is strong evidence that the Stone came to be at its present location because of a massive rock fall. The rock of the Stone and the material in the Hells Wall section of Bowder Crag are identical and its diamond cross-section reflects the pattern of joints in the rocks of Bowder Crag. Also, the rocks on part of Hells Wall have cleavage structures that mirror those on the two large standing stones, which at some time broke away from the Bowder Stone and now lie on its western side. The Stone is just one of many boulders lying on the slope below Bowder Crag and its position at the bottom of this slope is exactly where you would expect to find the largest boulder from a rock fall.
However there is no record of a massive rockfall occurring in historic times. The debris left by it is now completely stable and is today surrounded by dense scrubby woodland. The fall is thought to have occurred at the end of the last period of glaciation in the valley, between 13,500 and 10,000 years ago, when Bowder Crag, weakened by ice action, was subject to constant freeze thaw activity, we do know for definite that the stone is formed of Andesite lava.  [BSJ comment:  That's all very convincing.  I would just add that pressure release and "rock bursting" is a more likely explanation for massive rockfalls than freeze-thaw processes.]

So should we refer to this splendid boulder as an erratic or super-erratic? Yes, I think so.  It's clearly moved a kilometre or so from its place of origin on the cliffs above, and erratics can be emplaced by a wide range of different processes.  We cannot dismiss the possibility that the rockfall that carried the boulder downslope actually dumped it and a lot of other debris onto the surface of a wasting glacier.  That might be possible to elucidate with a bit of field work in the neighbourhood........
Posted by BRIAN JOHN at 11:27

How could a 2000 ton stone block stand balanced on a point?

Therefore, this block was placed like that by prehistoric people.

I should have used the word "edge" rather than "corner." if you Google this boulder you'll see lots of photos -- it looks very spectacular from this viewpoint, and less so from others. I reckon that when it was emplaced it was partly embedded in smaller blocks and finer debris, most of which has been cleaned away by those who were intent on turning it into a tourist attraction.....

Was it MPP again clearing the grounds from under the "proto-stat" ?

If such huge boulder was once supported by soil and stuff, won't removing all that make it fall? Unless it was so perfectly balanced and set erect that way originally.

I am seriously intrigued how such a huge thing can be so erect so balanced for so long! Can Nature do that?

As for perched boulders, nature is full of them. Perched blocks, balanced boulders, castle copjes, teetering crags. They are quirky or freaky, for sure, but there are plenty of them on Planet Earth.

I know! Some of these can be found at Stonehenge!