On September 29th 2014 I had a very jolly day on Flat Holm in the company of geologists Sid Howells and Chris Lee, and the Flat Holm tour guides, hunting for erratics and other traces of glaciation. We were blessed with perfect weather and a lack of gulls, so we were able to examine the island quite carefully. The island is important to Quaternary (Ice Age) studies because of its location at the junction between the Bristol Channel and the Severn Estuary, and because there is still great uncertainty about the location and timing of ice limits in this area. We know from studies of glacial deposits that the Irish Sea Glacier has extended at least once well into Somerset. I am a geomorphologist, and I hoped in the company of two geologists we might be able to sort a few things out, and so it proved.

First the shape of the island: it looks like a classic roche moutonnée shaped by overriding ice, with a gentle up-glacier slope on its western flank, and steeper slopes down-glacier to the east. We have to be rather careful about this, because the dipping Carboniferous Limestone strata have obviously played a role, but other evidence also supports the idea that ice has overwhelmed the island, travelling more or less from the west towards the east.

Next, the big erratics: the famous pink erratic at the north end of West Beach is spectacular and easy to spot because of its colour. We have sampled it, but we still do not know where it has come from. Could it have come from Lundy Island? That’s a possibility, but there are a number of other sources of pink granite erratic in the UK, some in Wales and some in Ireland, but the main possible source is in northern England where the Shap granite outcrops. Currently the best professional opinion is that the erratic has come from the Late Pre-Cambrian Coedana Granite outcrop on Anglesey. We cannot tell as yet whether the Flat Holm pink erratic comes from the same source as another famous pink erratic at Saunton in Devon. Chris spotted another large erratic, about 14” across on the north west foreshore. It is a brownish conglomerate, and again we have no idea where it came from. There may well be other erratic boulders with greyish colouring and fine textures, but because of the coincidence with the colouring of local bedrock boulders they are difficult to spot. A more time-consuming survey is clearly needed in the future. 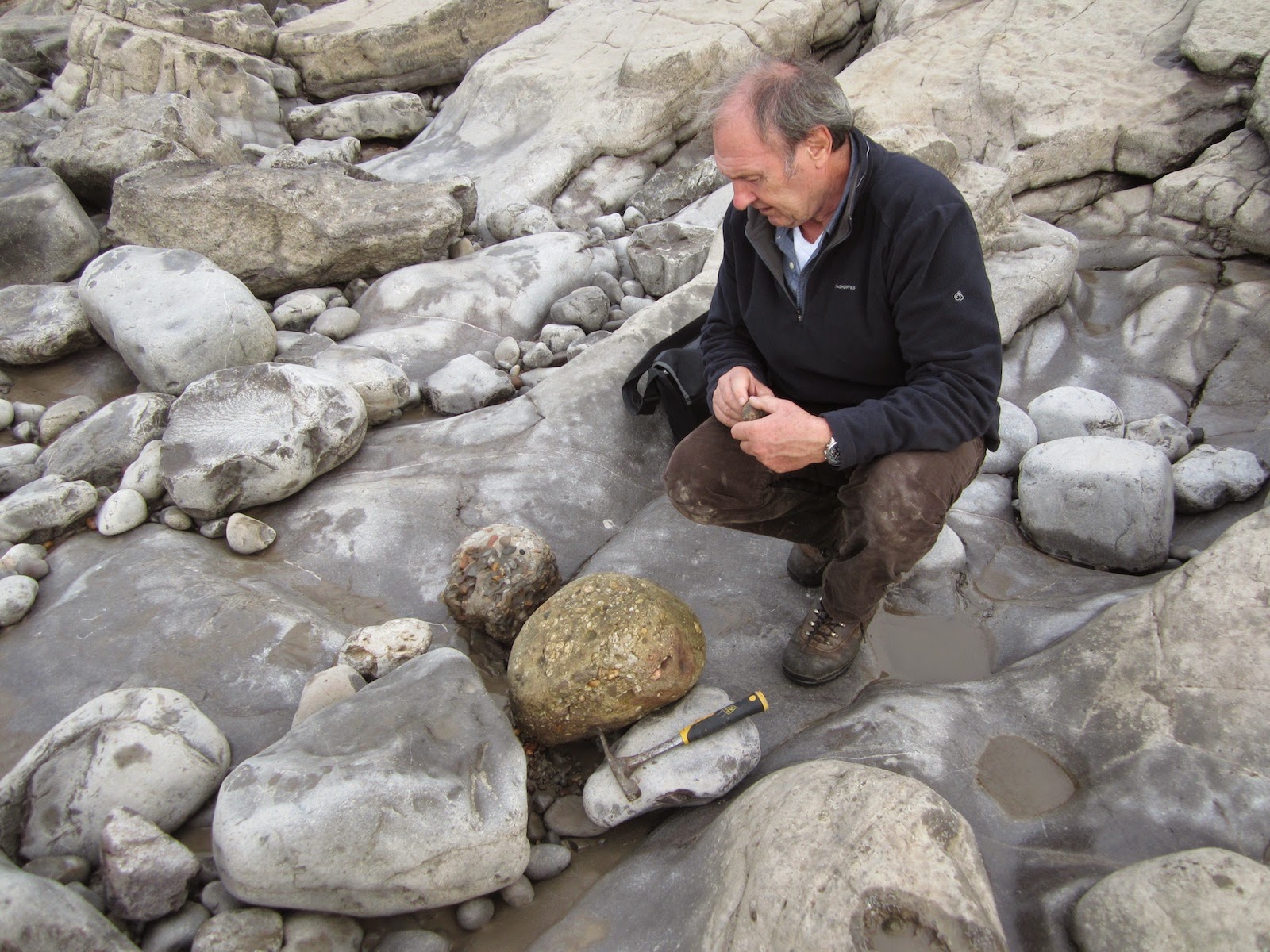 Since there appear to be no identifiable glacial deposits on the island, the real treasures lie on the pebble beaches between the tide marks. From our brief examinations we can say there are literally thousands of erratic pebbles, some derived from destroyed glacial deposits, and some from old river gravels on the floor of the estuary near the island, laid down at times of lower sea levels. Sid took away with him a very heavy load of pebbles including many collected by Linda and other society members, and these are still being identified.

There appear to be two groups of pebbles: relatively local, and far-travelled. The former include limestone, flints, dolomites, purple-brown quarzitic sandstones and shales – the latter are highly variable in lithology. Some, like vein quartz and quartzites, might have come from northern England, for example Carrock Fell. There are also many pebbles made of feldspar porphyry, feldspar-rich lava and silicified welded crystal lithic tuff. In hand samples, Sid already thinks some of these pebbles have come from north west Pembrokeshire, and it might even be possible to identify provenances on Ramsey island. Before we get too excited, thin section work has to be done. But all three of us looking at the pebbles agreed we have not yet seen anything which can be traced with confidence to the eastern part of Preseli, where spitted dolerites and rhyolitic "bluestones" demonstrate a strong link with the bluestone settings at Stonehenge. So a preliminary conclusion might be that the ice stream which crossed Flat Holm might have travelled via western rather than eastern Pembrokeshire.

With reference to our recent discussion, note that the orange band shown on this map more or less coincides with the "eastern Preseli erratic route" which crosses Kenn, Stanton Drew, Heytesbury and Stonehenge.........

When the pebble analysis is complete we will report back, but in the meantime we can say the following. The island has been glaciated at least once by ice travelling from the west rather than from the north. The ice of the Devensian Glaciation (20,000 years ago) probably did not affect the island, although the ice front of Welsh ice was not very far away. It may be that the last glaciation of the island was by the huge Irish Sea Glacier in the Anglian Glaciation, about 450,000 years ago.

I hope to return to do some more work, but in the meantime, thank you for your very kind hospitality and a grand day out.

The pink granite is very very distinctive in thin section.
It now has a full description in transmitted and reflected light.
It is nothing like the Shap adamellite, but then the boulder does not look like it either. I cannot believe any British geologist would have suggested Shap!
The erratic should be easy to match, but possibly not to one of the major west coast granites.
M

A little more, on a couple of occasions the feldspar porphyry has turned out to be coarse grained arkosic sandstone in thin section.
Plus welded tuff, mmmmmmmmmmmm.
The problem with too freely giving specific names is that you end up saying, for example, there are 30 different rocks in a glacial assemblage, when there are less than a dozen.
That is why the Divine Victorians use the term felsite.
M

Ah -- here we are in the lumping and splitting debate again. If we take lumping to its extreme, there are only 3 types of rocks in the world; sedimentary, igneous and metamorphic......

No I am saying better no name than a wrong name.!!
Better twelve real rock types than a New Age Transcendental number. Too many fingers in that pi.

A quick look at the petrography of the Lundy Granite- may the Gods bless Min Mag for being on-line- suggests that it is not from the main two granites.
M

Also, which glacial stream is most likely to have affected Steep Holme? This island lies perhaps 8 kilometres SSE of Flat Holm, and due west of Weston - Super - Mare.

I ask, because I am looking at Brian's Post's illustration of a map of the possible routes of the various major glaciers, across the Bristol Channel, etc.

It was good to know in the last few months that Cambridge University is offering sponsorship for Doctoral work on the Severn Estuary and its glaciation.

It is a great shame we do not know the exact provenance of the 1920's Stonehenge archaeologist "Newall's Ignimbrite Boulder" [Post dated 24 October 2012]. This was written up, and photographically illustrated, by the late Geoffrey Kellaway. What a shame we do not appear to have found out whether this boulder might still be in any Collection he had whilst he was alive. Do Myris and/or Brian, and any others, think this might have a Preseli or a SW Wales provenance? Or is it more likely to have travelled a far greater distance, e.g Ireland, Scotland or the Lake District?

Quite a few people may have missed the Post on 15th January, 2015, "Glaciation - are thing stirring?"

This tells us of Graduate Research opportunities into Quaternary Glaciation of the Bristol Channel, offered by Cambridge University Geography Department, later this year.

Tony, re the ignimbrite boulder, I'm not aware of any provenancing work. But there are certainly ignimbrites in Pembrokeshire, in the Fishguard Volcanic Series. There are some fantastic exposures on the west side of the Pen Caer peninsula.

I'm not aware of any pink erratics to the east or south of Lundy that have been definitively linked with the LUNDY granite.