Is Hautville's Quoit a glacial erratic? 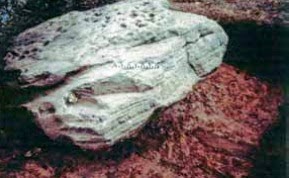 I'm happy to open this up for discussion again.  Hautville's Quoit is really a rather interesting boulder.  Only the upper pitted surface is visible today, but when the site was excavated the stone was revealed as a rather irregular boulder made of thin-bedded limestone.  Not sarsen.  There are traces of bivalves in the rock, and this suggested to me that it might be a Jurassic limestone, but I note that Vince thought it might be much older -- namely a Palaeozoic limestone from somewhere further west or north.  Have the bivalves now been identified?

From the photos I have seen, I'm not really all that convinced that there are glacial striations on this stone -- but its shape and overall appearance makes it look to me like a glacial erratic.

What other evidence of provenance or transport mechanisms do we have?  Some of our earlier debate, back in 2012, focussed on whether the pits on the surface might have been man-made.  Geo argued that they seem to be entirely natural, and I would agree with him on that.  The pitting of flat-lying exposed surfaces is something we have discussed with relation to granite in Brittany -- but the same processes of course operate on any flattish rock surface, and in the case of limestone we have an extra process -- solution -- which can crate micro-karstic features like those we see in the photo.
Posted by BRIAN JOHN at 15:01

Bivalves or brachiopods.
The former are more common in Mesozoic and post-Mesozoic Times.
Brachs are Palaeozoic mainly.
M

There is Rugby Limestone noted on the BGS site approx 600m from the site of quoit .

In which direction, Geo?

People should realise that Hautville's Quoit was once a very sizeable orthostat. The likes of Aubrey remarked upon it. So if it is an erratic, it's what's left of a big 'un.

Where is the rest of it? Is there a stump as well? Or some other chunks lying around?

North west .
2km to the north is the start of oolitic limestone .

According to Dymond writing in the Journal of the British Archaeological Association ,1877 ." It is true that Stukeley, in 1723, made it 13 ft. by 8 ft. by 4 ft.; but that these figures were greatly exaggerated, is evident from the statement of the careful Aubrey, in 1664, who gives the dimensions of the quoit as 10 ft. 6 ins. by 6 ft. 6 ins. by 1 ft. 10 ins.,—though he himself did not measure it, but got a friend on the spot to do it for him. If his figures were correct, the stone has since lost only about 3½ ft. of its length. "

Some things about Hautville's Quoit continue to mystery me. It just does not look like so many other megaliths you've posted on. Based entirely on the photos (I know! Always risky), especially the first two photos in your 2012 post on this (see http://brian-mountainman.blogspot.com/search?q=+Hautville%27s+Quoit )

here is what I find puzzling.

1) Hautville's Quoit looks more like a flat slab than other megaliths. I don't see it as ever being an orthostat.

2) The top layer seems to me to be different from the rest of the stone. Has a more molten pliable appearance and texture. While the other thin layers are more defined and horizontal and 'protected' from surface impact.

3) The pits on the top surface don't look like "natural" weather/solutional erosion. But certainly not man-made either! Rather, they look like the imprints of animal hoofs(deer?) made on a soft molten lake/river bottom. Look at the close spacing between pairs of such pits. And look at the well defined shape and depth of these. If these were weather erosion, won't we expect the top edge of these pits to be more worn? While the bottom more bowl-like flat? And not so cylindrical and narrow?

4) It would be very interesting to compare the configurations and looks of animal hoof mud imprints to these pits! My sense is they would look more alike than different. These pits certainly look like some photos I've seen of deer hoof imprints in mud. If that is correct and these pits can be identified as such, won't that be most revealing of the geomorphology of the region at the time these pits were made? and later when this stone was entrained?


" The pits on the top surface don't look like "natural" weather/solutional erosion."

Even from the pics it is obvious ,they do .
I doubt you have seen much/any limestone if you can think that .

Snorkeling unicorns ? Could be .

Show me your photos! And make your case!

"Snorkeling unicorns" does not address the points I have raised! If that is your argument, you have no argument.

To be fair, you should give Geo the chance to make his case. Why don't you post the second photo in your earlier 2012 post on this along with some photos of weathering effects on limestones for comparison.

And I'll be the first to admit I am wrong on this if these reasonably compare the same.

Kostas they are solution pits.
What is a molten lake?
Are these animals dipping their hooves into lava?
Salamanders perhaps.
Kostas go and look at pics of the Ring of Brodgar, they are all, slabs.
M

Kostas -- get real and do some research on solution features on calcareous rocks. There is nothing unusual about them at all.

Salamanders? Unicorns? Dancing goats? Personally I'm more interested in the name. Where did that French name come from?


My case is very simple and has already been made.
To repeat ,as is always necessary ,starting in November 2012 .
Even from the many pics it is obvious that the markings on the quoit are not man made and are in keeping with what we find on limestone and even conglomerates .I doubt that you have seen any .
The hoof prints are a recent suggestion ,thanks for the humour , and in case it was serious , it has been refuted . I doubt you will admit to being wrong on either point and the same suggestions will re-appear in another couple of years .

I admit flat slabs can be orthostats. And I also admit I may be wrong on the pits being animal hoof prints! But I'd like to see the photos before I divorce that idea.

I did my own google search to find photos of animal hoof prints in mud and solutional pits on limestone. These links are the best I found. There may be better.

It would be instructive if Brian posts these (or other) photos side by side with the second photo of his 2012 post on this. For all of us to compare, leaving aside our prejudgments.

I can (and have) change my mind. Telling me just does not. Showing me may!

The Old Boys in the Olden Days (with their folklore) probably called such features The Devil's Hoof Prints! Plenty of U.K. sites are commonly known as The Devil's this, that or the other, Kostas. An alternative name is Grim or Hob.

Quoting directly from the article, my (their) last word on Quoit!

"Hautville’s Quoit consists of a pale brown to grey sandstone. The sandstone can be described as comprising subrounded to rounded (high sphericity), fine to medium (250 - 375 microns), well to medium sorted, shiny, polished, mostly translucent grains of quartz, that appear matrix supported in a siliceous cement. There are numerous small clam-like (bivalve) fossil shells measuring up to 10mm x 6mm in an area of exposed bedding surfaces; these fossils are possibly a marker bed and might be useful in determining the origin of the rock type but they have not yet been identified. A white scaly appearance on some parts of the stone is likely to be due to lichen growth or as a result of weathering. The pock-marked surface (Figure 3-3) might be the consequence of a number of factors, including the effect of roots or solution. " [bold face mine]

So ... not limestone, but sandstone. While the surface pits may be due to a number of factors, including "roots". If "roots", why not "hoofs"?

Ah Kostas
Nice find the description is of a medium grained sandstone. I wonder if it be calcareous but they might have spotted that.
Bivalves so Mesozoic. Probably not that far.
Hoofs
"I would say elves to him
but I rather that he said it for himself.
Nuff said.
Enjoy Mons Claudianus lots now in the Vatican.
M.

Kostas -- message deleted. Getting fed up. Discuss it all somewhere else if you like, but not on this blog.