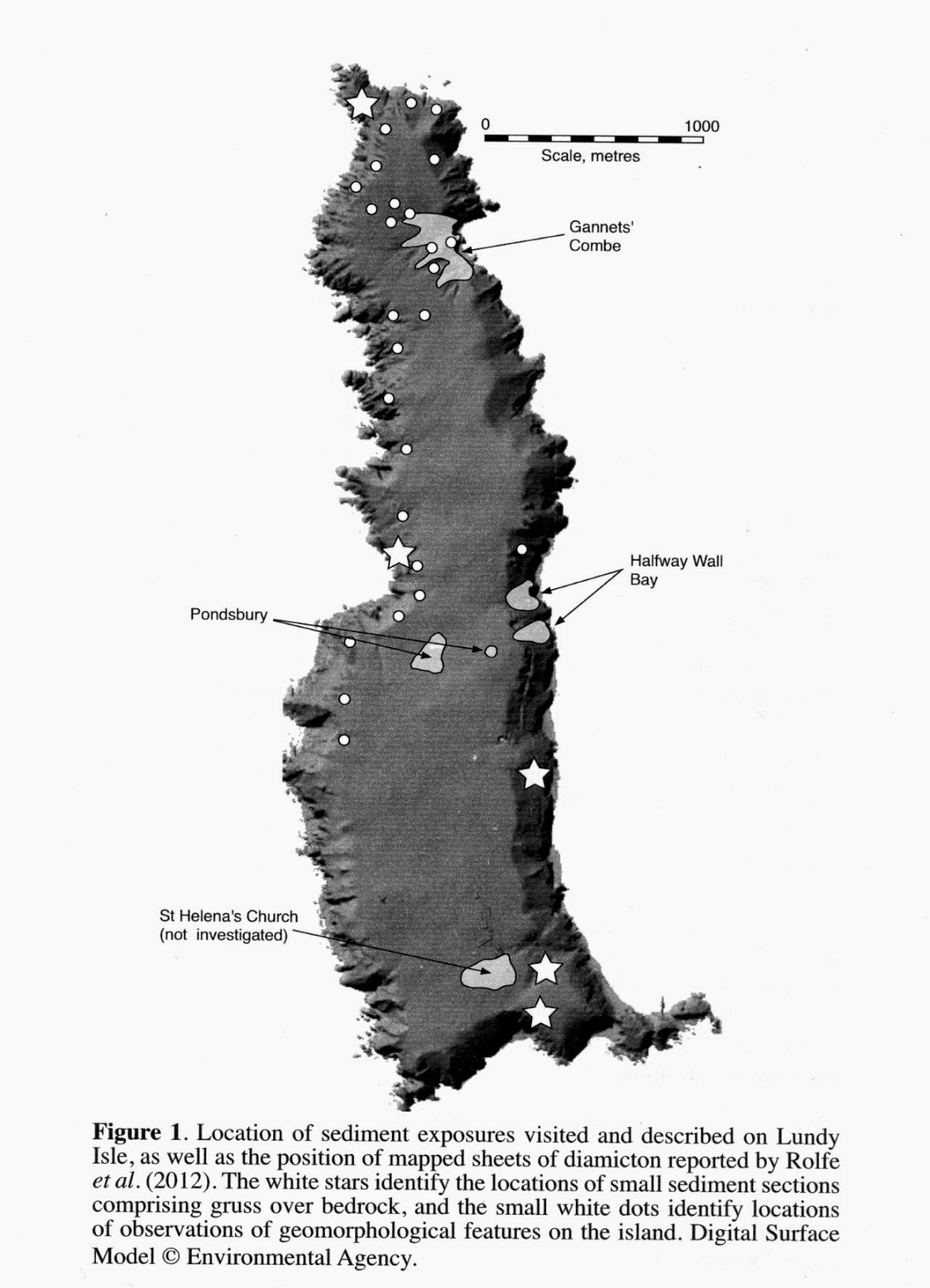 Map of Lundy from Carr and Hiemstra -- showing the locations examined.


On this blog we are used to talking about archaeological warfare between different tribal groups, but maybe not so used to talking about disagreements between geomorphologists.  Well, as in all sciences, disagreements and disputes happen -- and there is an interesting one going on just now between those who think that Lundy was glaciated in the Devensian, and those who do not.

The fuss is all related to this paper:

On the basis of cosmogenic dates, Rolfe and his colleagues have argued for an EARLY Devensian glaciation of the island -- ie before 50,000 years ago.  As I have indicated on this blog, I find that dating difficult to accept, since the stratigraphy on the shores of the Bristol Channel suggests that if there was a glaciation here, it would have been at the time of the LGM (Last Glacial Maximum) around 20,000 years ago.

Now, in a short article in Quaternary Newsletter (Feb 2015, No 135), Simon Carr and John Hiemstra are actually questioning the reliability of the field observations of Rolfe and his group.  The authors of the new note have been to the island, hunting for exposures of "diamicton" (horrible word, which generally refers to till) in the places where it is shown by Rolfe et al on their maps.  They found just a "thin regolith and soil" and patches of gruss (gravelly surface material derived from the weathering of granite) -- and found that there was insufficient material of possible glacial origin for them to collect any samples for analysis.  They also question the interpretations of Rolfe et al regarding surface erosional features, small channels, gullies, and ice-moulded or scoured features, arguing instead that these features are simply the result of prolonged in situ weathering of granite surfaces.

In fairness to Rolfe et al, they do not refer to any exposures of till on the island, but they do talk of "diamicton",  talus, erratic gravels and cobble spreads, and areas where there are boulders and cobbles on the surface.  I have not seen the micro-erosional features on the island, but I do find the illustrations in their paper to be quite convincing evidence of glacial scouring.

Carr and Hiemstra conclude "that there is no direct evidence to support (the idea) that any of Lundy Isle was influenced by Late Quaternatu glaciation" (p 46).   They also argue that Lundy and the Bristol Channel area remained ice-free through the period leading up to and including the LGM."  (What that statement means is something of a mystery to me. What period are they talking about?  Devensian, or Late Quaternary?)

The one thing completely ignored by Carr and Hiemstra is the presence of abundant erratics on the island.  It's all very well for them to argue that all the features they have examined can be explained by the "in situ weathering of granite" over a very long period, but until they explain for us how all those erratics found their way onto the high surface of the island, nobody is going to take their ideas seriously.

We need to bear in mind that Carr and Hiemstra are "defending a hypothesis" here.  It would be very inconvenient for them to accept the evidence for a Lundy Island Devensian glaciation, since Hiemstra was one of the authors of a 2006 paper which supported the idea of a long surge lobe pushing all the way from St George's Channel and far out into the South-Western approaches at the time of the LGM.   This was originally proposed by James Scourse and others in 1990 -- that is, 25 years ago.   On the map showing the extent of this surge lobe, the Scilly Isles are shown as being on its eastern flank, and Lundy Island is well clear of the ice edge.  As I have argued on many occasions on this blog, this surge lobe is glaciologically implausible.  I'm surprised that there are still people who seem to believe in it, since the field evidence suggests that there are Devensian glacial deposits well beyond its suggested ice edges. 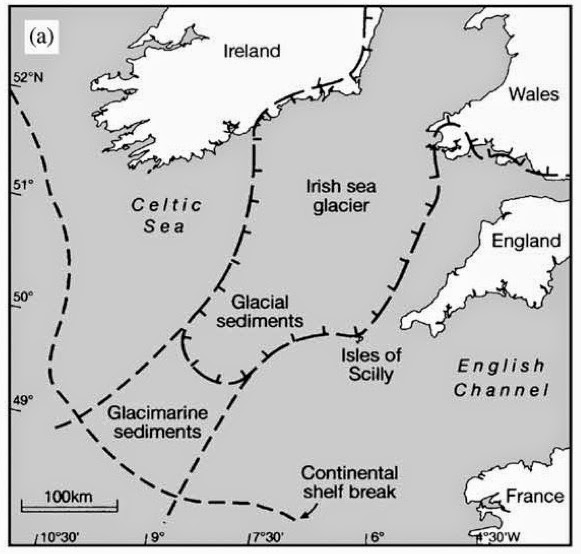 How does the recent findings of glacier till in the Celtic Sea and the mysterious seabed ridges in the English Channel comport with this spat?

Perhaps it's time for an update on this ongoing research!

There aren't any new findings of till in the Celtic Sea, as far as I know. Most of the descriptions in the literature are from 1990 or earlier.