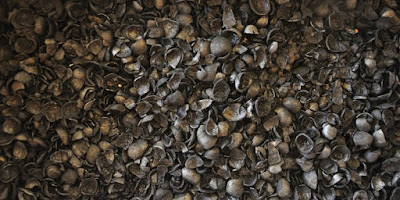 Just to avoid confusion, this pic does NOT relate to Rhosyfelin.  It comes from Google images, showing some carbonized hazel nut shells, and I thought it was rather nice.....

I have been reading (once again) the paper by Parker Pearson et al, which purports to make the case for Neolithic quarrying at Rhosyfelin.  I have been paying particular attention to the dating section of the paper, in which the authors have to make the best of a pretty miserable situation, given that the abundant radiocarbon dates tell us a lot about intermittent occupation but nothing at all about quarrying.  As we all know, the famous "pseudo-proto-orthostat" which was invested with great significance (or "significated", as Tim Darvill might put it) when it was discovered, in conjunction with all that stuff about Pompeii, turned out to have nothing at all to do with the Neolithic, since there are Bronze Age organic materials beneath it.  So it is now deemed to have nothing whatsoever to do with the Stonehenge bluestone settings, but presumably with another, later, stage of bluestone extractions with stones maybe intended for local use.

I can hardly believe how unscientific this all is.  For a start, the "removal of the rhyolite pillar" is as wild a piece of speculation as you are ever likely to see in print.  We have examined it many times previously on this blog, so we don't need to do it again.  But the dating bit is really staggering in its incompetence, since a few carbonised hazel nut shells from a Neolithic occupation layer "just 1.5m away" are being used to prop up the whole gigantic edifice of the "Neolithic Quarry".  I have said it before, and I will say it again -- this is just as daft as finding a 20 year old Fairy Liquid bottle on the beach at Newport and claiming that the cave in the nearby cliffs was eroded by the sea 20 years ago.

There is no other dating evidence from Rhosyfelin to support the thesis of Neolithic bluestone quarrying.  I suspect that far into the future, this Antiquity paper will be shown to generations of archaeology students during their ongoing studies of white elephants and pseudo-science.  But another part of me thinks that maybe this is all part of a jolly jape, designed by a multi-talented team to test just how naive and gullible the public and the media (not to mention the archaeology establishment) actually are........  So all hail the rollicking pranksters for managing to get away with it for five whole years without being rumbled! 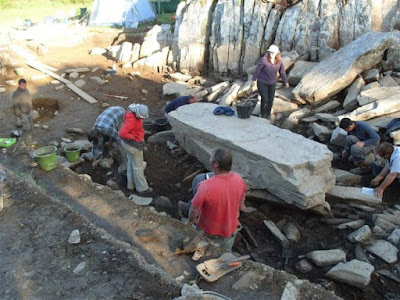 I missed that when reading the report. I guess the answer is that it depends which stratigraphic unit the pit and the rock lie in. To really confirm the date of the deposition of the rock, there would have to be some dating material from underneath it

The implication (without further information) is that the rock is earlier than the pit, which might fit the Neolithic, or the peri-glacial.

Where does your photograph of hazel nuts comes from? It rather suggests that these are from the site, but I'd have guessed that the samples that were dated would be few in number and less well preserved than the cornucopia shown here.

No no -- these burnt hazel nuts come from Google images -- nothing to do with Rhosyfelin. I'll add a caption to that effect......

Which rock are you talking about? If the "proto-orthostat" there is indeed Bronze Age organic material beneath it -- so the stone must have got to where it is even later. It can't have been put there, or arrived there as a result of a rockfall, in the Neolithic.

The "Neolithic hearth" is near the tip of the spur -- quite a long way from the "proto-orthostat."

Sorry, I was completely wrong. Comes from reading things on my phone!