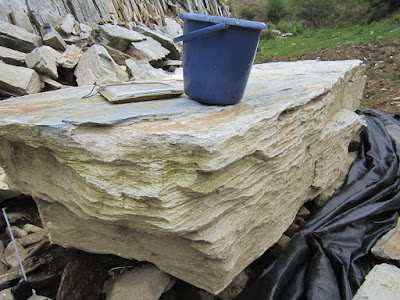 The "pseudo-proto-orthostat" at Rhosyfelin.  It is a rock-solid certainty that the two weathered surfaces shown here will have greater exposure ages than the surface on which the bucket is sitting.


Last month I reported on the planned sampling programme at Rhosyfelin -- and it is pretty certain that the sampling has now been done by Derek Fabel, with MPP and Richard Bevins in attendance.  Interestingly, a few weeks ago I received a message from a quite senior academic unconnected with the dig that my involvement (or even suggestions for sampling locations) would not be welcomed since those involved "know what they are doing."   Let's hope so.  All will be revealed in due course, but I really do hope that Derek has taken samples designed to test the minimum ages of some of the weathered surfaces and some of the surfaces affected by rockfalls, as well as the famous "recess" from which MPP thinks a bluestone pillar was extracted somewhere between 6,000 yrs BP and 5,000 yrs BP.

I have already done many posts on this blog about the potential -- and the pitfalls -- of cosmogenic dating in general, and the 36Cl method in particular.
One previous post:
http://brian-mountainman.blogspot.co.uk/2016/08/rhosyfelin-more-good-news-from-rock-face.html

Of course, all dates from this site will be MINIMUM DATES, since whatever is measured by way of cosmic bombardment on specific rock surfaces will simply represent the period of time that has elapsed during which those surfaces have been open to the heavens.  We cannot know the extent to which said surfaces have been affected or covered by seasonal snowbanks, standing water, a temporary regolith, vegetation (bracken, gorse, brambles, shrubs and trees) or even rockfall debris;  there may have been many episodes, quite unconnected to human interference, when the "cosmic clock" has been stopped.  So we will always get minimum ages for the exposure of surfaces.

In those circumstances, it will be very difficult indeed to accurately date block removal and headwall exposure in a place like Rhosyfelin, in a thickly vegetated environment.  The top of Carningli would be, in theory, a much better place in which to get sensible age determinations!  A date of 5,000 yrs BP on a Rhosyfelin rock surface, for example, might falsely suggest that there was an "event" at that time such as the physical removal of a block.  On the other hand the block might have been eroded away or taken away much earlier that that, followed by centuries or millennia of overshading by gorse bushes or shrubs or even burial beneath rubble or soil.  Then a rockfall or landslide, or even a wildfire,  might expose the surface to cosmogenic bombardment and weathering for the first time.......  To make matters even more complex, evergreen overshading plants such as gorse or conifers will cut off most radiation whereas plants that die back or lose their leaves in winter will allow winter light to penetrate to the ground beneath them.

In this context it is not surprising that 36Cl and 10Be dates are often very erratic, as discovered by Danny McCarroll and his colleagues when they undertook a dating programme on rock surfaces in west Wales in 2010:

The Carningli dates were all over 100,000 yrs BP, and the dates from rock exposures on the north Pembrokeshire coast came out at over 35,000 yrs BP.  Danny and his colleagues were greatly exercised, in their discussions of the dates, by the problem of "inherited ages" on rock surfaces that had been intermittently or partly eroded by overriding ice.

So cosmogenic dating of rock surfaces is far from perfect, but better than nothing.  One date, from MPP's famous recess, may give us some guidance on the likelihood of quarrying and the reliability of the block removal hypothesis, but a spread of dates from maybe 20 sites would give us much more data to work with. 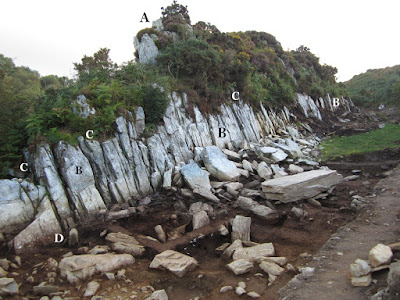 Just for fun, here is a list of the possible MINIMUM dates that might be obtained from various parts of the Rhosyfelin spur.  For the heavily weathered and abraded surfaces (for example, at A) we might well get exposure ages of over 100,000 years; for areas at the base of the rockface (areas marked D) that have been eroded by meltwater or ice and then covered by accumulated rockfall debris and tree growth, we might see exposure ages of less than 10,000 years; for areas high on the crag in the "gorse and bracken zone (marked C) we might get ages less than 18,000; and for areas on the rock-face subject to post-Devensian rockfalls (marked B) we might see a wide variety of exposure ages, ranging from 18,000 years to the present day.  The "freshness" of the rock surface should give a guide.

I see Derek Fabel has an entry in the University of Glasgow's "Experts Directory" on - line.

Anyone heard anything about this, yet? Myris??