Tracing the origins of a wild goose chase 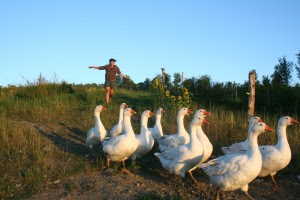 I'm still trying to find out where the claim for incredibly accurate "spot provenancing" at the northern tip of Craig Rhosyfelin came from, and I have been re-reading this article, which geologist Rob Ixer is presumably proud of,  given that he has has kindly placed it on the Academia web site for all to read.  It still makes me cringe when I read it, four years after its publication.  I know that it is just a "popular" article  written for simple geologists who may not know much about archaeology, but it is really very dubious indeed.

"Very detailed sampling" at Rhosyfelin?  It is not very detailed at all -- there may have been, in 2012, a dozen or so samples taken from the rhyolitic outcrops around Rhosyfelin and Pont Saeson,  and subjected to petrography and geochemical analyses, but we have no idea from the published slides what the full range of foliated rhyolite fabrics might be, or how widespread the jovian fabric found near the tip of the spur might be.  I have asked over and again on this blog for an assessment of the full lateral extent of the "signature" that has caused all the fun and games, but have had no response.  So a plea to the geologists Rob Ixer and Richard Bevins -- can we please have all of the thin sections published on the Academia or ResearchGate web site (as "supplementary data") so that we can see for ourselves what has led you to your conclusions?

If there are lots of other thin sections from lots of other sampled sites in the vicinity since 2012, let's see them too.  It's very easy to upload supporting images onto these academic web sites.  I have done it, so I know the process.   Show, don't tell, if you want to convince me and other sceptics.

Are the Stonehenge foliated rhyolites with fabric identical to those from this site?  No, they are not.  they are similar -- that is the best that can be said.

".........an almost impossible provenance of ten squares metres."  All of the earth scientists who have visited the site with me are agreed that this is an unsupportable claim, since the geologists do not know where the layer with the sampled signature currently outcrops, or where it might have outcropped in the past, prior to erosion of the crag.

"The archaeologists were told where to dig."  So the geologists are to blame for everything.......

"They (MPP et al) found, just a few metres from site 9, a large proto-orthostat, a large joint block set for its journey to Salisbury Plain."    I still cannot believe that this sentence, packed full with unsupportable assumptions, came from a professional geologist.

It might sound a bit mean-spirited to go after one particular geologist in this way, particularly since Rob has been very willing to engage with others and debate matters openly, in a way that one can only applaud.  But this is actually a very serious matter, since over and again the archaeologists say "This quarrying business?  We are just archaeologists -- and we have taken professional guidance from Ixer and Bevins -- and THEY are the experts who know what they are talking about, and who have told us this is a quarry......."

Time to retract that wretched article from "Mineral Planning", Rob?


This is a key passage:
"Subsequently matching the distinctive‘rhyolite with fabric’ debitage (first seen in Stone’s stones) from Stonehenge to very detailed sampling along the Welsh outcrop showed that rocks from the extreme north-east of Craig Rhos-y-felin (‘site 9’) were identical to Stonehenge rhyolites showing the‘Jovian’ texture. This suggests an almost impossible provenance of ten squares metres. The archaeologists were told where to dig. In September 2011, Professor Mike Parker-Pearson of Sheffield University and his team cleared the vegetation from the northern end of Craig Rhos-y-felin and excavated. They found, just a few metres from site 9, a large proto-orthostat, a large joint block set for its journey to Salisbury Plain. So the contents of a 60-year-old box led to the discovery of the first secure Stonehenge-related quarry site, confirming that man moved the bluestones."

Digging into Stonehenge’s past
The provenance of Stonehenge’s rocks has been a subject of heated debate for many years.
Rob Ixer explains how the contents of a small box led to the discovery of the first secure Stonehenge-related quarry

https://www.academia.edu/4036952/Mining_planning._A_quick_review_of_Stonehenge_bluestone_origins
Posted by BRIAN JOHN at 11:33

As a former librarian/ information worker, I am used to trying to find information related to the subjects on this Blog. I have just found an article written last year within an organisation I'd not heard of before, the Society for Iterdisciplinary Studies.

The article shows a refreshing scepticism about all the claims from the MPP Team for a quarry at Rhosyfelin.

Within this article is mention, and connection to, an article written by a Geologist within Wales who says their is no evidence for there being any quarry at Rhosyfelin. I think, having only briefly looked so far, he is a co - author with Brian of the Papers last winter.

As for tracing the origins of those wild geese? Well, the horse's mouth is clearly Rob Ixer, Esq.

The Society I just mentioned, S.I.S., says it's the oldest and most up - to - date society for catastrophist infomation and research.

Yes, that's my old friend Dyfed in the video clip. He is a far better geologist than I am, and I have great confidence in his judgments relating to rocks and geological processes.

I don't recall coming across that group before -- but yes, it's good to see a splash of cynicism from somebody who does not accept that MPP and MP are uniquely in possession of the truth.......

"This suggests an almost impossible provenance of ten metres square."

Perhaps, in this sentence if IF NOT in those surrounding it, TD chose his words extremely carefully. Rather like what a politician like former Chancellor, recently - deposed George Osborne recently said about his Tory Party's new Leader, Theresa May, following the BREXIT result:-

Proper scientists seem to be involved in S.I.S., folks, and their site covers a wide specrum of scientific issues, not just archaeology.

Brian
You are not a geologist nor have you ever been one and it is far to late for you to try. You have picked up some knowledge in hand specimen identification of a limited number of lithologies.

You are as much a geologist as MPP is a glacial geomorphologist.

Stick to what you know. You exhort others to do so. It is intellectually dishonest and self-defeating to adopt such a dual position.


It is dishonest of you to claim to belong to the heaven-born. A year's sub-sid geology 60 years ago in the pre-plate tectonic days makes you ante-deluvian. I bet you remember Steinmann and his trinity.

Ah, Myris -- I see that your professional pride is dented. Well, I may be an antedeluvian old codger, and I may have no idea who Steinman was or is, but in all fields I try as honestly as I can to assess the evidence in front of me and to work out whether the evidence presented justifies the conclusions drawn. Your article in this mining magazine is certainly not one of your best -- you do not even get the locality site right.

I repeat -- all the other completely ignorant senior geomorphologists (most of whom now hold chairs in assorted universities) who have looked at Rhosyfelin and who have read the literature make the same points: there is no quarry, and the evidence presented does not justify the suggestion that the provenancing of bluestone fragments has been done to within a few square metres.

I don't like being accused of intellectual dishonesty, and I do not adopt a dual position at all -- in every field we should welcome close scrutiny of our work and defend it. On this blog, I have at least been prepared to answer questions and deal with criticisms from many different directions, without worrying too much whether the questions come from botanists, economists or even archaeologists. It wouldn't help me if I was to say "I can't be bothered to explain why I hold this particular view. Life is too short. I'm the expert and you just have to believe what I tell you."

My parents tell me I was born in Carmarthen. Which part of heaven were you born in?

"I'm a long way from anywhere
like heaven in this town, your town"

JAMES TAYLOR, circa 1970 (a song he sang to his audiences wherever he happened to be that particular night!)

Home, particularly our place of birth, usually equates to folks' idea of their (nostalgic) heaven. Probably why James Taylor refers to Home in so many of his songs....

Apologies, folks: I seem to have got my 'Tim Darvills' and my 'Rob Ixers' muddled, in my comment at 09.12 today, above.