Rhosyfelin in its regional stratigraphic context

It should not come as any sort of surprise, but the Quaternary stratigraphy at Rhosyfelin is exactly what we would expect from an inland site affected by the Devensian glaciation.  Here are some diagrams from ancient history (well, from 1970, when I published my "Pembrokeshire" chapter in the Glaciation of Wales book) which show the regional context: 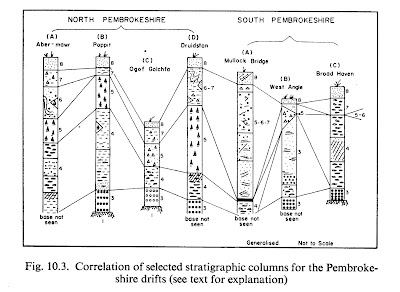 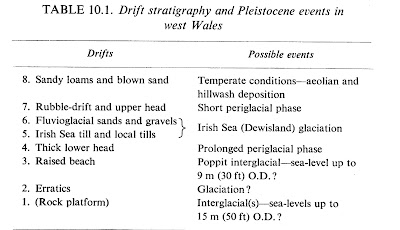 There are of course some regional and local variations dependent upon environmental conditions.  But essentially, the Late Quaternary stratigraphy inland (where clearly we are not going to find raised beaches)  is everywhere dominated by a sequence of deposits numbered 4-8 on the above table.  The Lower Head is a stratified cold-climate slope deposit containing substantial rockfall debris where cliff breakdown was going on in the vicinity; the Irish Sea till and local equivalents represent a real glacial episode in which Devensian ice affected much of Pembrokeshire; the fluvioglacial sands and gravels, with occasional boulder beds and inclusions of flowtill, represent the wastage phase of the Devensian ice; the Upper Head and "rubble drift" accumulated during cold climate conditions following final ice wastage with some reworking during the "cold snaps" referred to as the late-glacial Zones 1 and 3; the sandy loams, colluvium and blown sand are for the most part Holocene materials whose precise characteristics (degree of stratification etc) are determined by local slope and environmental condition; and at the ground surface we find a modern soil horizon infiltrated by root systems and high in humus.

Now let's look at two sections, one from Aber-mawr South and the other from Rhosyfelin: 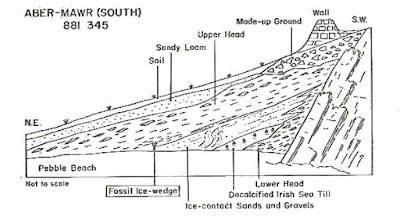 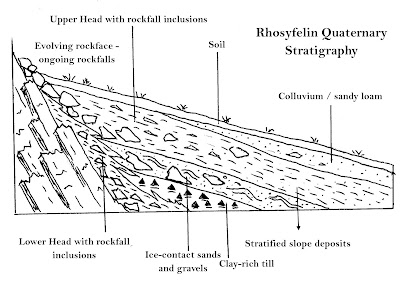 In both of these sites, the Lower Head is very blocky indeed, with large boulders and slabs that have fallen off the cliffs set in a matrix of finer broken rock materials.  In both cases, these rockfall materials are intercalated with glacial and fluvioglacial materials, indicating that rockfall debris was picked up by overriding ice and also by meltwater, and that rockfalls continued whenever the adjacent rock face was exposed to periglacial processes.  As far as the Upper Head and stratified slope deposits are concerned, they are naturally coarsest close to the rock face and more dominated by sands, gravels and colluvium further away.  A lot of the material in these layers has come from underlying glacial and fluvioglacial materials, and this is why I coined the term "rubble drift" to differentiate it from the "cleaner" upper head deposits elsewhere.

As I have said before, stratigraphy does not lie, and if you are able to employ an objective eye at Rhosyfelin you will see that there is nothing remotely unusual about this sequence of deposits.  The Holocene deposits contain organic materials and also signs of intermittent human occupation, as we would expect of a sheltered camping and hunting site.  Where on earth did the idea come from that the stratified slope deposits are "archaeological layers"?  They are nothing of the sort.  They are entirely natural, and are located exactly where we geomorphologists expect them to be.

Alex -- yes, I'm saying that the only quarrymen ever to have worked on this site are those who have been quarrying there over the last five years. In the Antiquity paper, the diggers say remarkably little about the processes of sedimentation and the sequence of occupation. They are so preoccupied with quarrying that they forget all about the basic stuff -- this is why I was hoping for a paper describing the sediments, the organic components and the occupation phases. Myris now tells us that no such paper is planned, which seems to me to be extraordinary, given all the hard work put in over the past five years.

There is a difference I said that the dating paper that the pet rock boys initiated, initially in 2008!!!!, and were instrumental in having done, was to find the exact Ordovician age for the CRyf rhyolitic tuffs and their debitage.
Recent dating at CRyf is nothing to do with the pet rock boys; they found the quarry in some dramatically good scientific work, provenencing to within square metres directly leading to the discovery of the quarry site. The rest is up to the archys. Neither I nor my sources know what future plans there are for CRyf or any unpublished data from there.
Report what I say not what you think I say.
Without the pet rock boys' good eye CRyf would be an unregarded outcrop of 'felsite' rather than the Mecca for New Age (or these days slightly Middle Age) Hippys and bilious old Geographers to lose sleep over.
The quarry is a killer for the old glacial theory of which there is not a single bit of evidence. No other bit of glacial material on Salisbury Plain just the 80 bluestones in a single pile. Mmmmmmm you could not make it up?
M
Time to come clean and rewrite the book. Your fiction is always worth reading.

Here we go again -- same old stuff from a bilious old geologist! Throw in the word "quarry" a few times in every comment in the hope that somebody, some day, will take it seriously.

Yes, your work relating to Rhosyfelin and Pont Saeson is jolly fine, though I am not the only one who thinks that the pudding is being somewhat over-egged by comments such as that just made. Provenancing -- even quite detailed provenancing -- is very interesting, but you forget that it applies to glacial entrainment just as it applies to the human extraction of stone. Your problem, Myris, is that you have strayed into the field of archaeology, and are stuck with some comments that you would have been wiser not to make. Stick to what you know.

There is actually a new FILM just out about the successors to The Quarrymen. Surely we can ALL bury our differences about glacial entrainment or human entrapment, however basically bilious we may be deep down, and insist that Sir Paul MacCartney (but not his surviving Post - Quarryman "bongo man", Mr Richard "stone rings" Starkey) have his DNA checked to see whether he is, indeed, Out Of Rhosyfelin? That is, if Mr Parker Pearson can produce any DNA evidence from Rhosyfelin that is the right age.