The tip of the Rhosyfelin spur 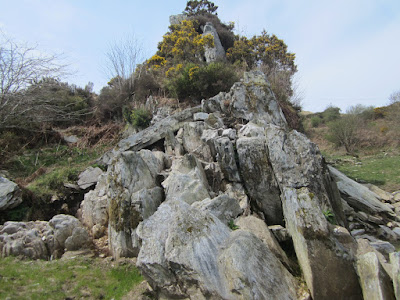 Somewhere out on the tip of the Rhosyfelin spur is the location of sampling point number 8 -- where the characteristics of the foliated rhyolites were deemed by Ixer and Bevins to be identical (sort of) with the characteristics of some of the foliated rhyolite debitage at Stonehenge.  None of the slides made from the samples are identical, but that did not stop the geologists claiming that they had provenanced some of the fragments at Stonehenge "to within a few square metres."  The rest, as they say, is history.

Of far greater importance is the  character of the bedrock surface here.  Quite spectacular.  Click to enlarge the photo.  Many of the rock surfaces are heavily weathered and abraded, suggestive of either ice action or (more likely) an episode of intensive abrasion by heavily-charged glacial meltwater in a dead-ice environment.  There is similar abrasion on the rock surface at the base of the spur, which is what leads me and various colleagues who have visited the site (I hesitate to call them senior academics since Myris will get upset) to think that meltwater -- possibly flowing subglacially -- has at some stage in the Devensian flowed over the spur and down the small channel on the right under hydrostatic pressure.  What are the dates for this episode?  Maybe the samples collected for cosmogenic dating will help us to tell the story.
Posted by BRIAN JOHN at 17:47

The rest, as they say, was hysterical, i.e. given to an outburst of mass hysteria within the mass media. Sorry, "Myris", if you do not agree.