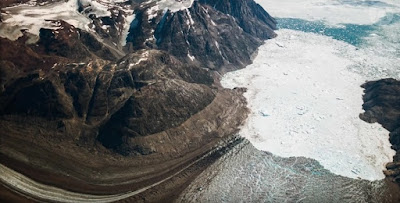 There is yet another scary project from Greenland, where huge amounts of work are under way, relating to the effects of global warming.  In this project, Danish scientists have been looking at the original photos from the 1930's -- taken by pilots working with the Danish Geodetic Survey for the first accurate maps of Greenland ever made.  They have been back to the same fjords, trying to take photos from the same places, of the same glaciers.  In one case, they recorded a fjord glacier (floating snout) retreat of over 30 km between 1935 and 2015.

This is one of the most spectacular photos from the new project, showing a calving glacier snout in the foreground and above it, in the centre of the photo, an amazing trimline, showing where the glacier surface was in 1930.  The contrast between the upper and lower parts of the mountainside is very stark.  More to the point, measurements here show that the glacier surface has dropped vertically by more than 400m.

Are we worried?  We certainly should be........ if the whole of the Greenland ice sheet goes, that will result in a 7m rise in sea-levels.  Add in increased water volume because of higher ocean temperatures, and extra isostatic depression on coastlines because of the extra weight of water, and we come to a figure nearer 10 m.
Posted by BRIAN JOHN at 18:41

Arctic shipping routes are going to open up significantly this Century, even with the most optimistic forecasts of Global Warming used. BBC Science News, September 6th.