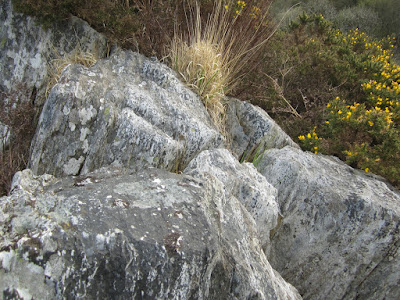 How old are these and other rock faces at Rhosyfelin?  My guess is that this one has been exposed to cosmic bombardment for around 18,000 years.

Last year I suggested to Rob Ixer and many other visitors to the Rhosyfelin dig site that what we all really need is a programme of cosmogenic 36Cl dating on the rock face, so as to work out how fresh, or how old, parts of it actually are.  If dated surfaces show that large parts of the rock face were exposed for the first time in the Neolithic, that might support the thesis of Neolithic quarrying.  If the supposedly "quarried" face proves to be a great deal older, bang goes the quarrying theory.  If parts of the rock face prove to have been exposed at different times, that would support the thesis that there have been intermittent rockfalls going on here ever since the Devensian ice melted away, around 18,000 years ago.

When this was put to Prof MPP and his colleagues, to their credit they agreed, on the basis that anything which brings us closer to the truth has to be a good thing.

Now, assorted little birds tell us that money has been found and that 36Cl sampling on the rock face will be done within the next couple of weeks, by Derek Fabel from East Kilbride, in the company of Prof MPP.  Derek is a cosmogenic dating specialist who has been working with the exciting BRITICE  Chrono project, which I have mentioned many times on this blog.  The leader of that project is Prof Chris Clark of Sheffield University, who has been cited a couple of times by Prof MPP as an authority on the glaciation of the British Isles who doubts that the Irish Sea Glacier could have reached anywhere near Wiltshire.  (You will recall that MPP was based in Sheffield before he moved to UCL.)   Well, Chris is indeed an authority, who says some things that I agree with and others that I think are somewhat dubious.  Geomorphologists hardly ever agree with one another on very much anyway......

So Derek will visit the site, take samples and do the dating.  His sample collecting will of course be determined to some degree by the hypothesis being tested -- and we do not know what that is.  We can be sure that the testing of the so-called "bluestone extraction point" will be in the mix.  The sampling programme will also be constrained by the amount of money in the kitty, and on the accessibility of quartz-rich veins liable to give sound results.  In my view the site could do with around 20 samples, across the face, on some of the fallen stones (including the 8 tonne "picnic table"), at the foot of the face, and on the ridge summit and the col which appears to have been influenced by overflowing meltwater.

Given that Derek is involved with BRITICE, I hope he will take the opportunity of investigating some of the suggestions made by my colleagues and myself concerning the age and pattern of glaciation here on the north flank of Mynydd Preseli. 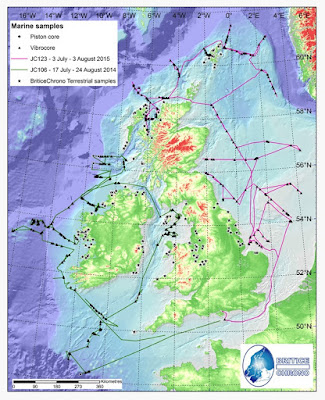 Isn't cosmogenic dating specialist Derek Fabel's attempt to take up to 20 samples (or, at any rate, that is the number you would prefer), hampered by the fact that the archaeologists filled in their excavations substantially last year? For example, is it practicable, within reasonable budget constraints, for him, accompanied by MPP, to obtain samples from the so - called "bluestone extraction point"?

Yes, it would have been far more sensible for this dating project to have been done when the excavation pits were still open. But the so-called "extraction" point is still visible and accessible, as is most of the rock face, as are most of the weathered surfaces on the crest of the ridge. So I think a reasonable job can still be done.