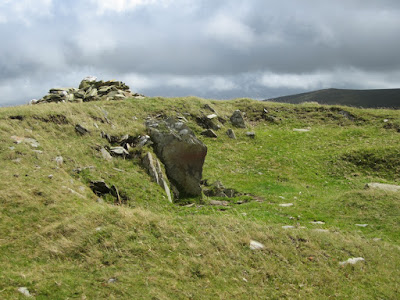 Well, hubris is everything, isn't it?  If truth be told, this is not breaking news at all; we don't know if the quarry is Neolithic or not; and the hilltop in question is not all that remote........

But read on, dear reader.  This is actually quite important, since what we are talking about here is the only thing in the Presely region that looks remotely like a prehistoric quarry.  Forget about Rhosyfelin and Carn Goedog -- they are already consigned to the dustbin of history.

Strictly, we are talking about quarries, since there are scores of pits stretched out across the landscape.

Cnwc yr Hydd is a strange site on a broad hill summit not far from Tafarn y Bwlch, on the northern flank of Preseli.  (Tafarn y Bwlch is where the new Preseli visitor centre is being built.)  The gentle hill summit is on the common, and is open moorland.  It has an altitude of 339m (1112 ft).   Details: SN082344.

To the west is the farm of Gernos-fach, and not far away is the strange embanked circular enclosure described here:
http://brian-mountainman.blogspot.co.uk/2016/08/gernos-fach-ring-cairn.html
The southern flank of the hill has a series of broad platforms or ledges, on one of which the standing and recumbent stones of Waun Mawn are located.  This is where MPP and his team looked for a "proto-Stonehenge" setting of bluestones, without success, a few years ago.

Here, running across the summit, we find by far the most convincing assemblage of quarrying traces in the Preseli region. 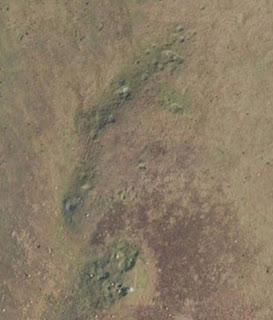 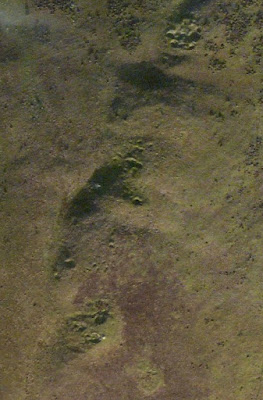 These quarries are well known.  They are recorded in the Archwilio and Coflein data bases, and there are abundant photos in the record, but nobody seems to have any idea how old they are, and what they were used for.  The above images are satellite images, with acknowledgement to Bing and Google Earth.  They give a nice impression of the scale of the features, aligned approx NE to SW.  The BGS definitive geological map shows an elongated outcrop of "micro gabbro" running across this hill, but I think the outcropping rock here looks more like a foliated rhyolite.  We need to get expert opinion on this, although there is a fair chance that Richard Bevins and Rob Ixer will already have examined samples from here.

This is a perfectly sensible place for a quarry or series of quarries.  A high open hill summit affording easy access, and a nice easy slope down which boulders, cobbles or rubble can be carried manually or on wagons or horse-drawn sleds.  The rock is heavily foliated and fractured, breaking up into slabs and splinters rather than pillars or boulders.  Could some of the pits have been used in prehistoric times for the extraction of standing stones?  It's a possibility.  Could they have been used for the extraction of raw materials for the manufacture of tools like cutting blades or arrow-heads?  Quite possibly. Could some pits have been opened up for the extraction of easily managed slabs for the building of walls or embankments in historic times?  That's yet another possibility.  Down below, on the moorland near the Waun Mawn standing stones, there is a long straight embankment which is a bit of a mystery -- there was a medieval deer park in this area, and it might even have been a sort of boundary wall erected in connection with this.  The raw materials for that embankment must have come from somewhere, and many of them must have come from the boggy areas in the vicinity of the standing stones;  but those areas must have been unpleasant and difficult to work in, so why not take other stones from the quarries near the hill summit?

There are yet more quarry pits too, not shown in the above photos and downslope of the two areas shown in the satellite images.  They seem to be connected by a trackway to the road that leads from Tafarn y Bwlch to Gernos-fach, and my theory is that they were used for the provision of the roadstone needed to make the track dry and stable.  So those quarries may date from the 1700's or even later.

Currently I think it most likely that these fascinating little quarries might well have been used over and again in different historical and prehistoric periods.  I hope somebody is doing some serious work on them. 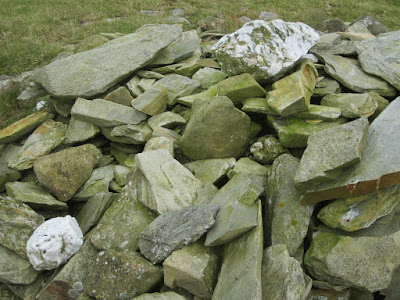 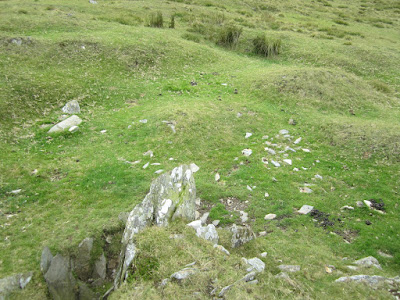 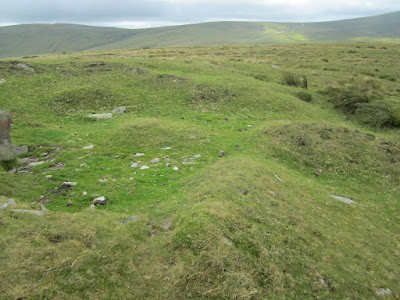