Pensarn -- what will the diggers find?

With the quarrymen about to start digging at Pensarn (if the rumours are correct) any day now, it's fun to speculate a bit on what they might find.  I have done one post on this before:

As I suggested in that post, the slight mound in the field at SN 124358 is most likely to be a heavily degraded Bronze Age burial mound.  It is approx 25m across, and appears roughly circular, and it sits on the highest part of a little plateau, with glorious views in all directions.  The field is well drained, and here and there one finds fragments of foliated rhyolite on the surface.  If the field was to be freshly ploughed, broken fragments of this rock would predominate, together with bits of dolerite.  Both rock types are seen in the hedgerows round about.  The geological maps suggest that foliated rhyolite is the bedrock type here, just as it is a short distance away at Rhosyfelin.

There are many other Bronze Age burial mounds in the area, especially on the summit ridge of Preseli -- for example at Foelfeddau, on Foel Cwmcerwyn, and on Foel Drygarn.  There is another one at Carn Briw, not far from Carningli.  They seem to be preferentially located on hill summits or plateaux.  Should we call these features round barrows?  Possibly not -- they are generally too small, although some of them contained cist graves before they were vandalised by ancient antiquarians.

As I suggested earlier, the mound in the field near Pensarn might well have been much more prominent originally, but after many  centuries of erosion and maybe deliberate and accidental destruction by animals, ploughing etc, there is nothing much left.  A guess is that it was maybe 10m in diameter and maybe 3m high originally, and that it has now degraded down to this very low feature with stones and soil spread out to a diameter of c 25m.  Another guess is that it is made of smallish rhyolite and dolerite stones collected locally -- although there may be larger slabs in the core.

Kate Welham has suggested that "something big" might be discovered here.  What might that be?  Well, the hope is that proto-Stonehenge will be found here, either in the form of a circle of monolith sockets or maybe in the form of some monoliths still embedded in the ground which can conveniently be labelled as "the ones they left behind."  How likely is any of this?  Plenty of foliated rhyolites and dolerites will be found, either as small slabs or cobbles or as larger boulders, pillars or slabs.  The archaeologists will want to call any of the latter larger lumps of rock orthostats or monoliths, but they will have to be very careful indeed about that, since the landscape was, and is, littered with very large stones as a consequence of glacial and periglacial action during the Devensian cold period.   Large numbers of such stones have already been removed -- you can see them where they have been "liberated" and relocated into hedge banks or used as gateposts in farms including Rhostwarch, just down the track: 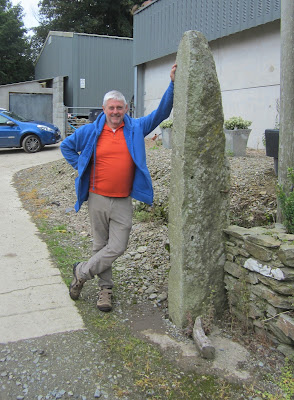 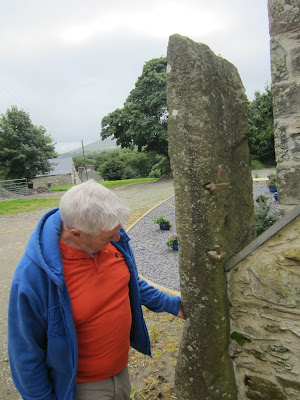 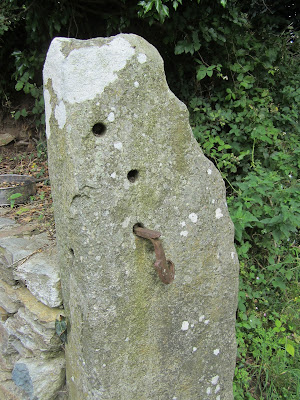 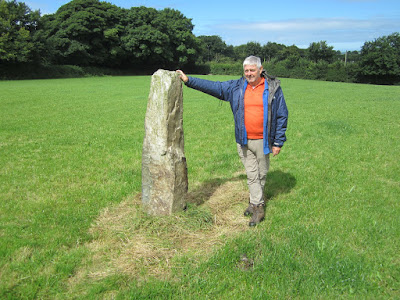 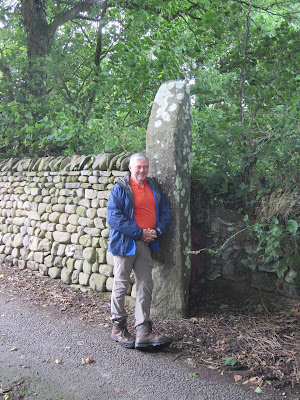 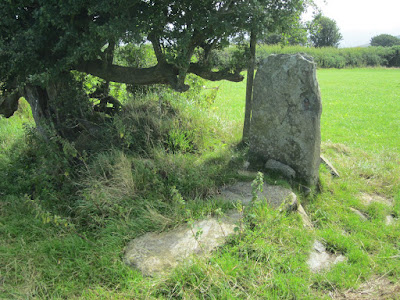 Some of the standing stones / gateposts located within a few hundred metres of the Pensarn mound.  Most are made of dolerite -- some are foliated rhyolite.  There is no reason to assume that any of them have been transported to their present positions from a long way away.  The most parsimonious explanation is that all have been used more or less where found. (Thanks to Chris Johnson for being such a colourful and exotic model!)

It is also to be expected that during the course of the dig a number of extraction pits might be found, from which stones have been taken either for the building of the mound or later for field clearance purposes.  Stone take pits  are known over a radius of up to 50m away from similar circular or conical mounds in North Pembrokeshire, well away from farmland -- as at Carn Briw:

In addition to the man-made features at this site, it is to be expected that the archaeologists will find a base of broken rhyolite fragments beneath the Holocene soil layer, and also a scatter of Devensian till containing local rhyolite, dolerite and other cobbles and boulders.  This till is found across the landscape hereabouts -- sometimes very thin, sometimes over 4m thick, and sometimes almost absent, depending on the processes that operated on the glacier bed.   The diggers might even find some fluvioglacial deposits.

Could there have been standing stones around or near the burial mound?  It's possible -- the Bronze Age was the time when mounds were being built in this area, and it was also the time when standing stones were erected all over the place.  But I'm not aware of any sites where there is a close association between the one and the other.

I suspect that there will be an interesting dig, but that nothing will be found to link it with either Rhosyfelin or Stonehenge..........

Round barrows did occur in the Neolithic period. Source? The Maestro himself, non other than MPP in his 2016 Stonehenge:...... Archaeology For Everyone book.

My understanding is that in the Neolithic, some of the dolmens had round cairns over them -- others were oval or elongated. I suppose a group structure -- like Cerrig y Gof -- probably had a round cairn over the top of it. But from my reading it appears that it was only when these big chambered tombs were replaced by smaller cist graves -- in the Bronze Age -- that round cairns or barrows became commonplace. Who knows? Maybe there is a collapsed and buried Neolithic dolmen / cromlech under that little mound?

Surprising to myself featured in such an eminent blog. I feel pleased that I predicted, about 3/4 years ago that Pensarn is approximately where investigations might be done - in this blog!! So never mind Kate, you read about it here first!

Actually it is not such a brilliant insight, just common sense. When there are stones with riverine crystals from the Rhosyfelin low grounds and stones with starry crystals from the high grounds then it makes sense to look for a combination somewhere roughly equidistant and with a good view of the encircling horizons - Pensarn then. I walked up there a few years ago and saw a standing stone in the middle of a field, and a good view, and it seemed to make sense.

As to what the mound contains, my guess would be a passage grave a bit like Beddry Afanc might have been or Newgrange even (but smaller) :). Time wise this would put the find some fifteen hundred years earlier than round barrows, and pre-stonehenge first phase. I wish I was in the area this September to see what is discovered ... maybe nothing.

For any actual Pensarn dig, should one indeed take place, MPP and his assembled troops really OUGHT to consult an decent experienced Geomorphologist who understands glacial processes as well as periglacial and more recent ones, and preferably one with local knowledge of the Preseli environment...who could that be?....that is, IF they want to avoid mistaking sub - surface boulders for indubitable orthostats.........I suppose, however. if they searched WIDELY enough and dismissed a lot of boulders as natural features, and only focused upon those boulders that formed a circle, they MIGHT eventually come up with some size of circle!

A MAN SEES WHAT HE WANTS TO SEE
AND DISREGARDS THE REST..

Of course I hope they have a geomorphologist or two on hand to check things out and to ensure that natural features are not magically assigned to the work of our handy Neolithic ancestors. But I have my doubts........

Actually there is rather less chance of fundamental errors creeping in here, since the natural sediment sequence is likely to be less complex. We just hope for accurate recording and sensible interpretations.

"The Chambered Cairn" is a new film about PARC LE BREOS, West Glamorgan, Chambered Cairn. It is premiering at Gower Heritage Centre on Saturday September 17th. The cairn is said to be one of hte finest in South Wales and has been much restored.