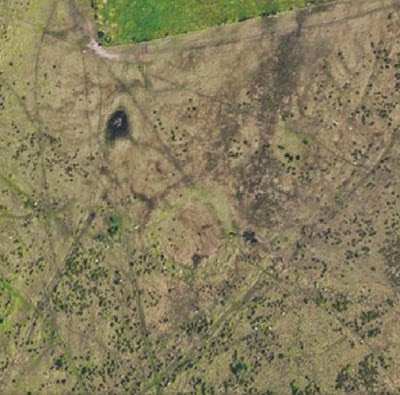 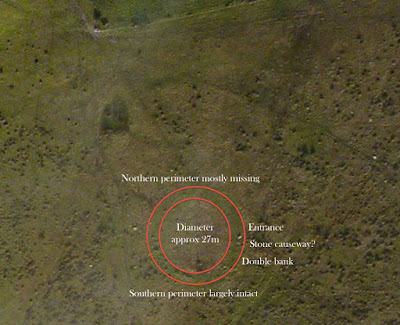 Today Chris and I managed to find the Gernos Fach ring cairn which various people (including Hugh, I think) have mentioned in the past.  It's not easy to find, in a wilderness of gorse patches, boggy areas and stony litter, but if you use the above images and work from the corner of the enclosed land to the north, you'll find it.  Grid reference:  SN078345.

There is no mention of this site on the Coflein records.

The bank is relatively dry and grass-covered, whereas the centre of the ring is more boggy with rushes and sphagnum.   The southern part of the bank is more or less intact, a metre or so wide, about 50 cms high, and with abundant stones breaking the surface.  At the "entrance" on the eastern rim there are two larger dolerite stones or gatekeepers, and a rough arrangement of smaller stones that seem to suggest a passage or causeway running up to the entrance from the east.  To the south of this stone setting there appears to be a double bank -- what was this all about?  The northern semi--circle is largely absent, but a few traces of it can still be seen maybe 20 cms above the general level of the turf.

Was the whole feature abandoned before it could be finished?  Did it have a wooden palisade on top of the bank, maybe with the purpose of containing animals?  It's too big to be a hut circle, but is it a utilitarian feature or a ceremonial one?  How old is it?

Answers on a post-card please.  Hugh knows far more about these circular structures than I do -- his comments will be welcome. 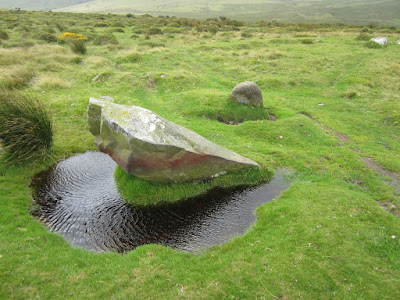 The twin "entrance stones" at the eastern edge of the ring cairn -- very different shapes and sizes.  Beyond them is the "double banked" area.  The edge of the outer bank can be seen swinging away clockwise towards the stone at the right edge of the photo.

This is certainly a strange site and not clear what type or age it is. The first issue is why it does not seem to have been recorded by any of the recent archaeological teams in the area. The feature certainly exists and is an apparent archaeological feature. It is circular, in a slight depression and has an air of being unfinished. I had a walk over it about two years ago, but came away with no firm conclusions.

As a ring cairn, it doesn’t appear very convincing. The circle is rather too large, they are normally smaller in diameter with a relatively broader stone bank, and I don’t think commonly feature entrances. The could be examples more of this size, I’d have to look up the references.
The position of the site over a low hollow is interesting. Although the site is on relatively high ground, it occupies a distinctly low area which causes the dampness and rushes growing in the centre. This may result from scarping out the centre of the site to obtain material for the bank, or could show an interest in damp areas for ritual purposes. It is hard to see this as being a domestic settlement, when a free draining site could be found in a few metres in any direction.

The local site with the greatest parallels is the circular enclosure with associated field systems just north of Carn Goedog (see Brian’s attempts to call it a pingo). Another parallel is the animal pound at Brynberian. This is circular, about the same dimension and with an entranceway. I could quite believe that these two have the same origins.

To be controversial, can I point out that the ‘classic’ henges are found in locally low lying areas, certainly in contrast with the ‘classic’ causewayed camps on their high ground. So could this site with its broad diameter and circular shape be a form of henge monument?

Agree with all of that, Dave. Yes, it is a bit of a puzzle -- maybe we should just call these features "banked enclosures" so as to avoid any assumptions about purpose. Like the other features on the northern flank of Preseli and on Carningli and Mynydd Dinas, the bank is very low and there does appear to be an entrance, on the lee side. Am I right in suggesting that these entrances are generally facing east? My own preference is to say they are probably animal enclosures which originally had wooden palisades on the bank -- and I suppose they could be of almost any age from Neolithic to medieval......

Here is the Dyfed Archaeological Trust description of the feature near Carn Goedog: