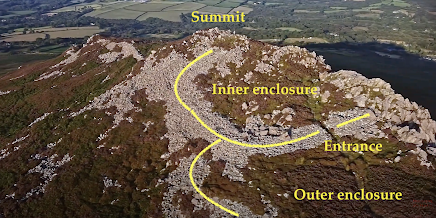 Here are two fine images extracted from Steve Spon's drone film.  Annotated for clarity.  I have labelled the "outer enclosure" here, but maybe it should be called the "middle enclosure" because there is another smaller one to the right, and still on the summit.   That's at the southern end of the site.   The walls are well and truly flattened, but I think they did exist.  The archaeologists who looked at Carningli say that all of these defensive walls on the summit have been slighted........

The smaller enclosure at the southern end of the site might have been an animal pound, used at times of uncertainty or friction with neighbouring tribes?

The village and its defensive walls are not really visible on these photos.  They are at the northern end of the site. 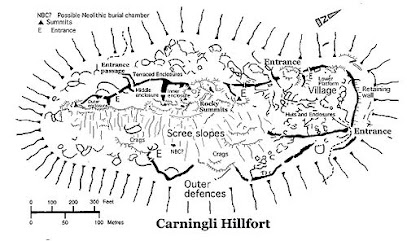 Another annotated image -- this time an oblique aerial photo from the RCAHMW collection.  View from the NW looking SE: 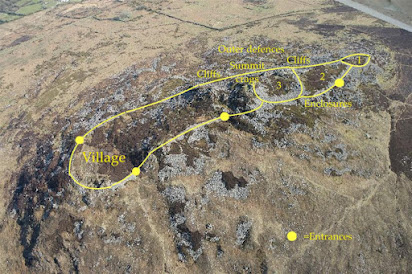 Thanks for this. The layout isn't clear when standing amogst the rocks.

I did hear that there was a carved or inscribed rock in the scree to the north east. I have never attempted to look for it as it would be like looking for a needle in a haystack. Have you seen it? ( i did do a search of this blog, bug nothing was found)

I have spent hundreds of hours up there, rooting about. I've never seen any inscribed stones -- but some of those near the entrance from the plateau have foliations or "banding" that some might interpret as man made.....