The Stone River and the Carn Meini cairn 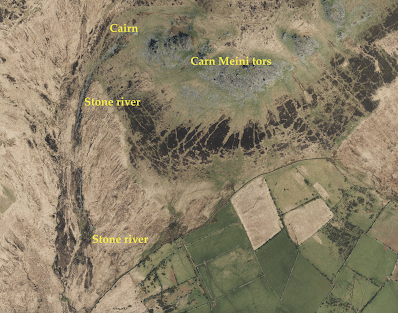 Satellite image showing the location of the cairn and stone river. 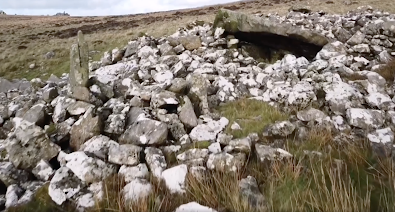 The Carn Meini cairn -- a very distinct topographical feature, complete with disturbed capstone and standing stone.   In Welsh it is Llech-y-Flaiddast.  (From the Preseli360 video) 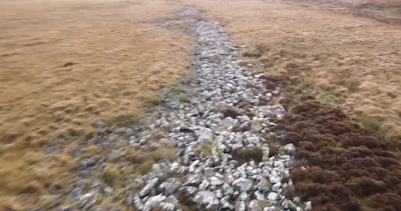 The "stone river" (Rhestyr Gerrig) lower down the slope conforms with many of the characteristics of related features in the Falkland Islands and elsewhere. (From the Preseli360 video) 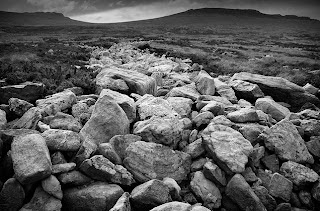 A stone run in the Falklands.  Here made of quartzite blocks rather than spotted dolerite -- but the processes are probably the same.....

Interest in these features has been awakened by Hugh Thomas through the posting of a drone video featuring this fascinating patch of moorland to the west of Carn Meini (Carn Menyn).   Thanks to him for flagging this up.......

The Stone River or stone run is very well known, and has been referred to as an ancient trackway, a moraine, a deliberate stone arrangement or alignment, or a periglacial feature similar to others found in periglacial contexts at high altitude or high latitude in many parts of the planet.

The Wikipedia definition of the feature is as follows:

The actual formation of stone runs involved five processes: weathering, solifluction, frost heaving, frost sorting, and washing. The stone runs are essentially different from moraines, rock glaciers, and rock flows or other rock phenomena involving the actual flow of rock blocks under stress that is sufficient to break down the cement or to cause crushing of the angularities and points of the boulders. By contrast, the stone run boulders are fixed quite stably, providing for safer climbing and crossing of the run.  Stone runs are accumulations of boulders with no finer material between them. In the Falklands, they occur on slopes of between 1 and 10 degrees, and are the product of mass-movement and stone sorting during past periods of cold climate. They everywhere occur in association with poorly sorted, clay-rich solifluction deposits.

With reference to the "Carn Meini cairn"  the excavation of the site (as part of the SPACES project) took place under the direction of Tim Darvill and Geoff Wainwright in 2011, and was written up in 2012 and in the 2016 Prehistory volume of the Pembrokeshire County History (pp 171-173).  The authors assumed -- without any solid evidence whatsoever -- that the earliest phase of occupation here was well back into the Mesolithic, since radiocarbon dates suggested occupation around 9,000 years ago and in subsequent millennia.  The suggestion that there was a "quarry pit for the exploitation of meta-mudstone" can safely be ignored, since there is no reason why anybody would want to "quarry" metamorphosed shales from here rather than anywhere else, since these rocks cover thousands of acres in the Preseli Hills.  Sharp-edged bits of slaty rock may well have been collected, but I have seen no evidence that suggests that this was a "special place."  Then, according to TD and GW, there was a second phase involving the "working of dolerite" -- but those words were deliberately chosen to flag up the speculation that this was a special place for quarrying -- and again this is not supported by the evidence.  This all supposedly occurred around 4,000 years ago.  Then the authors supposed that there was a final phase of meta-mudstone quarrying around 3,500 years ago, in the Bronze age.  There are radiocarbon dates, but they are somewhat confusing. On p168 of the County History volume it is all too apparent that TD and GW were all too keen, at the time, fo flag up the "discovery" of Mesolithic quarrying at Carn Meini and to see everything  through their Stonehenge rose-tinted spectacles -- as part of their effort to flag this up as a site of "special significance."   Pure speculation; no evidence that withstands scrutiny.

What is convincing is the presence here of a  standing stone and a cairn that incorporated a burial chamber.  A standing stone setting may have been followed by roughly circular ditch and a low outer bank.  This may have been re-fashioned slightly off-centre, with the use of some dolerite pillars, around 4,000 years ago, and then this was followed by a final phase of building with the cairn or round barrow with a burial cist and capstone at its core. This was dated to about 3,500 years BP.

In other words, the features here are Bronze Age rather than Neolithic -- and it is extraordinary that TD and GW have tried to interpret this site as if it is an important part of the Stonehenge bluestone story.  There is NOTHING here to suggest any link at all with Stonehenge.

The features around Carn Meini fit nicely into the regional context -- with some Neolithic features including remnants of cromlechs, long barrows or passage / gallery graves, and abundant Bronze Age features including embanked circles, burial mounds (as at Foelfeddau and on Foel Drygarn), and standing stones here and there. There's a standing stone circle at Gors Fawr, not far away from Carn Meini.   The field patterns around Carn Alw may well be Bronze age too, together with similar features on the flank of Carningli.

So I would characterise this cultural landscape as a Bronze Age landscape, with some older features and some newer ones (including the Iron Age fortified settlements on Foel Drygarn and Carn Alw).  The landscape displays an abundance of prehistoric features, as Hugh Thomas and I have been trying to point out for years.  The "Stonehenge connection" hypothesis is a complete waste of everybody's time, and it's high time that the archaeological fantasists got real.

PS.  I have examined this evidence before, and report on my thoughts here:

Quote:   With reference to the key "quarrying" site at SN 143324, the authors claim that "....shallow hollows suggestive of quarry pits were also recognised and, on the basis of surface evidence, seemed to be for the extraction of a fine, light-grey coloured meta-mudstone (Darvill et al. 2008). Surface evidence including a broken pillar-stone, intercutting quarry pits and indications of dolerite extraction on a terrace on the southern slopes of Carn Menyn at an altitude of 310m asl........" A 30 sq m pit across the terrace is claimed to show three main periods of activity associated with the working of meta-mudstones and spotted dolerites. It is claimed that the first workings on the site were for the extraction of meta-mudstones, and that there are at least a dozen pits along the edge of a dolerite dyke which are associated with this phase. Darvill and Wainwright claim that fire-setting was a part of the extraction process, and they present four radiocarbon dates on the "abundant charcoal from oak stick-wood" found in the holes. There are two radiocarbon dates from the deepest part of the pit -- 7987 yrs BP and 7711 yrs BP -- which are surprisingly old, and two others, one from 6170 yrs BP and the other from 6396 yrs BP. The authors also claim to have discovered hammer stones and flakes from the quarrying operations, although we are not shown any evidence in support of this contention. On the plan of the site, the authors show stone piles / small cairns (?) and also a spread of meta-mudstone knapping waste and two low-walled huts or shelters (?). They also show three broken dolerite pillar stones and two complete dolerite pillar stones, in an area where scores of stones could have been represented if they had chosen to do so. What should one make of all this "evidence"? Personally, I am not convinced that we are looking at any evidence of quarrying activity in the period 8,000 - 6,000 yrs BP. There are undulations and pits everywhere in this landscape -- as far as I am concerned, they are not noteworthy. We know that parts of these uplands were wooded during the early part of the Holocene, before climate change and grazing caused the woodland edge to retreat downslope. The name "Carn Goedog" means "Woodland Crag" -- and that's rather suggestive of quite a late woodland survival. Could the charcoal have come from natural fires or man-made clearance fires in the woodlands on the ridge crest? Perfectly feasible. Alternatively, we may be looking at charcoal left in fire pits which were used at Mesolithic or early Neolithic camp sites established here in the vicinity of the Carn Meini crags. Why would anybody want to use fire to extract slabs of meta-mudstone when it is so broken and shattered anyway in this area that you just have to walk along and pick it up......?