Oxford Gletscher -- the surface thermal regime of a surging glacier 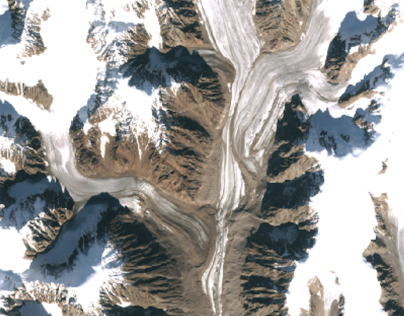 Surface chaos on the Oxford Gletscher, associated with two surges -- a big surge related to
the eastern branch of the main glacier, and a smaller one associated with a tributary
glacier on the west flank of the valley.  Note the very prominent looped moraine ridges and
the heavily pitted glacier surface.

In previous posts on this blog, I have drawn attention to the surging behaviour of some glaciers in the Staunings Alps / Scoresbysund region.  This post relates to Oxford Gletscher:

This is my account of the behaviour of Løberen, the "galloping glacier" in Nordvestfjord, Greenland, which has retreated some 7 km since the peak of its last surge:

https://www.theguardian.com/travel/2021/oct/03/my-love-affair-with-wales-megaliths-pentre-ifan-in-pembrokeshire
In the next big valley glacier trough to the east, occupied by Oxford Gletscher, something very similar has gone on. 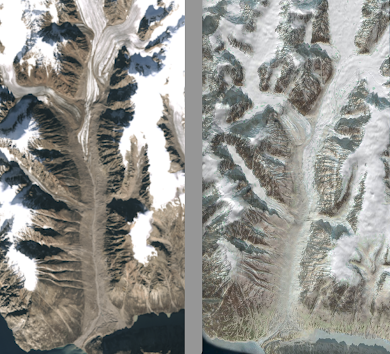 Two modern satellite images of Oxford Gletscher -- slightly different scales.
They show a snout retreat of c 4 km since the peak of the last surge.  The surge seems to have
been initiated by two glacier tributaries high up in the valley, and then transmitted all the way
to the snout as a rapid advance.
This is a study of some of the surge-type glaciers of East Greenland:
Surge potential and drainage-basin characteristics in East Greenland
Cambridge University Press: 14 September 2017
Hester Jiskoot,Tavi Murray andAdrian Luckman
Annals of Glaciology , Volume 36 , 2003 , pp. 142 - 148
DOI: https://doi.org/10.3189/172756403781816220

https://www.cambridge.org/core/journals/annals-of-glaciology/article/surge-potential-and-drainagebasin-characteristics-in-east-greenland/7C0E4731532A2E4F3220E2F0E982A189
This is another useful summary:
Surging glaciers in Greenland - a status Anker Weidick
8047-Article Text-42780-1-10-20210519.pdf
https://scholar.google.com/scholar_lookup?title=Surging+glaciers+in+Greenland%3A+a+status&author=Weidick+A.&publication+year=1988&journal=GrøNl.+Geol.+UndersøGelse%2C+Rapp.&volume=140&pages=106-110
Quote:  The first observation of surges in East Greenland was made during GGU field work in the Scoresby Sund region, where descriptions of the glacier Løberen were given by Henriksen & Watt (1968) and Olesen & Reeh (1969), and of Bjørnbo Gletscher by Rutishauscr (1971). Both glaciers are situated in the Stauning Alper, a mountainous area of Caledonian migmatites and granites (Henriksen & Higgins, 1976, especially map fig. 198, p. 218). The length of the quiescent phase has not been determined in the case of Løberen where the documented surge took place in the early 1960s, but a preceding quiescent phase must have covered several decades or even a century of downwasting of a 7 km lang glacier lobe with a maximum thickness of at least 300 m. As far as Bjørnbo Gletscher is concerned, Rutishauser (1971, p. 236) suggests an interval of 100 years between a surge around 1890 and an expected one at around 1990.  (Note:  the postulated 1990 surge has not happened.....) 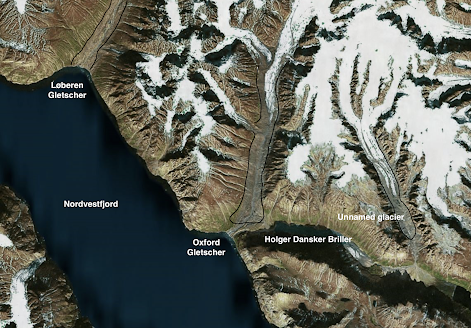 Annotated satellite image of three small surging glaciers on the north shore of Scoresbysund.  The black lines show the trimlines associated with each surge.   Løberen glacier reached the sea around 1960 and has subsequently retreated c 7 km.  Oxford Glacier had (around 1950?) a splayed snout at the end of the wider Holger Danskes Briller diffluent trough, and has subsequently retreated c 4 km.  The unnamed glacier to the east had a simple snout and did not spill over into the trough, and has retreated about 2 km since its last surge.
In 1962 four members of the OU expedition to East Greenland spent nine days on Oxford Gletscher mapping its surface features and undertaking glaciological work on what we assumed was a "polar glacier".   Dave Sugden and I planned and conducted the research, helped by Svend Wurm and Sandy Hall. Two temporary camps were established on the surface of the glacier.  The intention was to use a hand-operated drill in key locations and to use a thermocouple ice temperature monitor (designed and made by our friend Brian Hughes) to take as many readings as possible, so as to obtain information on the glacier's thermal characteristics. In the event, it was impossible to drill deeper than 15 ft in any of the 17 drilled holes on the glacier surface -- and so the readings taken were not of any use for interpretations of glacier movement or deep internal characteristics.  But they were of interest for analyses of surface melting characteristics at the height of the melt season.  The glacier snout was located in 1962 at an altitude of c 800 ft, near the southern trough exit.   The firn line was located at c 3850 ft asl. 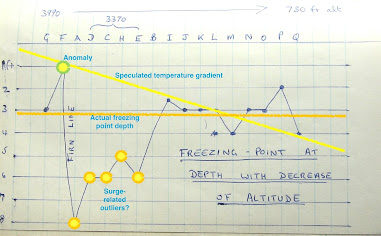 A plot in my notebook showing freezing point depths.  We expected a gradient down-glacier, but did not find it.  It looks as if the "norm" for exposed and ablating ice surfaces is c 1m, everywhere beneath the firn line.  However, the five anomalies, with freezing point depths of 5ft, 6ft and 8ft are all within a surge morainic loop that was not apparent to us when we were working on the glacier.
Only two sites were investigated above the firn line, but at every single site the ice surface temperature was slightly above freezing point -- ie mostly a fraction of one degree above zero centigrade. This may be related to the fact that during our fieldwork it was snowing more or less continuously, and melting fast, with very wet surface conditions during daylight hours.  David thinks that there may well have been meltwater penetration between ice crystals because the ice was effectively dead of inactive.
Temperatures dropped with every successive reading in every drilled hole.  No holes were drilled below 15 ft, possibly because of encounters with morainic debris or because of freezing on the drill shaft in contact with the sides of each hole.   The lowest temperature recorded was -3.2 deg C at site K in the middle section of the glacier, and in a number of holes the lowest temperature recorded was below -2.5 deg C.  We assumed that in all locations the temperature would have continued to fall with increasing depth beneath the surface.
We encountered no dramatic temperature inversions, but there was one anomaly at site A, near the firn line where there was slushy surface snow.  Here freezing point was encountered at a depth of 8 ft, after which the temperature fell and then returned to zero at a depth of 11.5 ft.  This was possibly related to a meltwater conduit.
Our main interest initially was to assess the depth of the "summer melting wave" into the ice, and to assess the thickness of the "winter freezing wave" -- sadly, because our drilled holes were so shallow, we could not assess the latter, but it is of interest that the summer melting wave penetrated on all parts of the glacier to a depth of approximately 1m, except for sites A, D, C, H and E, where zero deg C was encountered  much deeper, at around 2m. We were mystified by this at the time, and blamed errors in our ice temperature device, but it is now possible to see from modern satellite images that these "anomalous"sites were all within the loop of ice pushed westwards by the eastern tributary glacier in the surge that probably occurred about a decade before our visit. 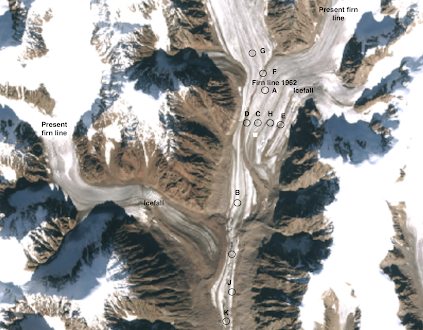 From the above annotated map, we can see that the temperature readings at sites F, A, D, C, H and E might well have been strongly influenced by the surge from the eastern tributary, since they are all within the loop of moraine.  However this might have happened, the zero C depth in the glacier is around 2m within this loop -- but I have no idea what the explanation may be! Perhaps this "slab"of ice is anomalously warm, or more susceptible to meltwater penetration, which may explain why it is apparently more mobile than the in situ ice beneath it?
David (who knows much more about glaciology than I do) has given some recent thought to our findings.  He says that on a true polar glacier, above the firn line (in the accumulation zone) the ice temperature at a depth of c 10 m (33 ft) should theoretically be the same as the mean annual air temperature.  We never had the opportunity to check that.  Around the firn line, theory has it that summer melting of snow and firn refreezes on contact with the ice, and this freezing process raises the temperature to zero.  Near the glacier snout on a polar glacier, where the surface gradient is steeper, in theory meltwater runs off, allowing the ice beneath the surface to remain below zero.
Having now plotted the drilling locations on a reliable satellite image of the glacier, we can see just how much debris there was, although we did not see it because of a heavy snowfall while we were at our highest camp site, near drilling site C.   There must have been so much debris in the ice in this upper section of the glacier that it was a miracle that our drill holes actually managed to penetrate more than a metre into the ice.
All in all, an interesting little piece of research, of no great importance, but a cause for some modest satisfaction for Dave and myself, 60 years later........ 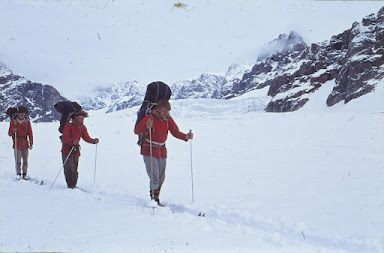 Trekking on the glacier, with the icefall in the middle distance.  Our colleague Svend was very disappointed that he did not get to film a genuine crevasses rescue....... 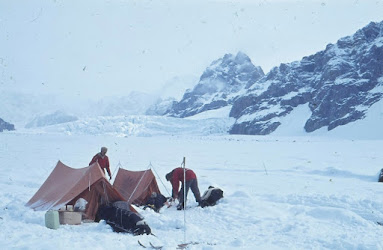 Highest camp site on the glacier, after a heavy snowfall. No wonder we did not know about
all those morainic loops......... 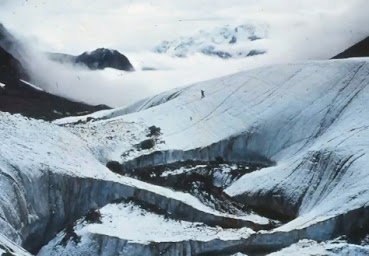 The chaotic ice surface on the lower part of the glacier -- a legacy of a surge maybe
a decade before our arrival.
Posted by BRIAN JOHN at 12:38