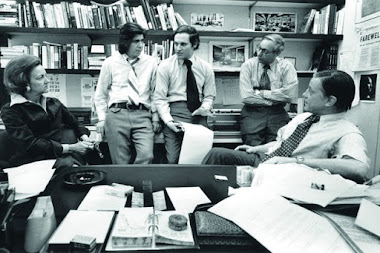 I have only just caught up on this, but in certain quarters the whole fantastic myth-making machine relating to bluestones, so-called quarries, and a mythical "giant circle" is referred to by the label "BLUESTONEGATE"..........
From Wikipedia:
The metonym 'Watergate' came to encompass an array of clandestine and often illegal activities undertaken by members of the Nixon administration, including bugging the offices of political opponents and people of whom Nixon or his officials were suspicious; ordering investigations of activist groups and political figures; and using the Federal Bureau of Investigation, the Central Intelligence Agency, and the Internal Revenue Service as political weapons.[15] The use of the suffix "-gate" after an identifying term has since become synonymous with public scandal, especially political scandal.[16][17][18][19][20]
See this too:  https://en.wikipedia.org/wiki/List_of_%22-gate%22_scandals_and_controversies
I like it!  We are not talking here of clandestine or illegal political activities, but of the corruption of science and the fabrication of evidence designed to create an aura of academic worth and respectability in the field of archaeology.  As I have argued over and again, what we see in a long programme of field research and publication is essentially scientific fraud.  We might as well call it a hoax, and I still think that the quarrying and stone circle story put out by Prof MPP and his fellows is worthless from a scientific point of view -- heavily promoted for assorted rather grubby reasons and accepted by far too many people who have signally failed to apply proper scrutiny to either the fieldwork digs or the published outputs.
One of the interesting things about the "-gate" suffix is that there is always an individual heading for an inevitable fall from grace.......
https://brian-mountainman.blogspot.com/2019/09/when-does-delusion-turn-into-hoax.html
https://brian-mountainman.blogspot.com/2019/08/the-bluestone-hoax-gets-ever-more.html
https://brian-mountainman.blogspot.com/2018/11/the-bluestone-quarries-best-hoax-since.html
This is from one of the followers of this blog, with whom I correspond off the record:
"My personal feeling is that what is happening with regard to #Bluestonegate is a monumental act of fraud. I cannot say that publicly and it's dangerous for small practitioners to put their heads too far above the parapet.  It depresses me............"
It depresses me, too......... but I have no plans to shut up or go away. And I'm rather encouraged by the fact that my paper entitled Waun Mawn and the search for "proto-Stonehenge" has now had over 3,200 reads.
I dare to hope that at least some of those readers have enough intelligence to bring some scrutiny to bear on the published output of the diggers and their geological friends.  And enough concern for the truth to stick their heads above the parapet.
Posted by BRIAN JOHN at 22:36

"If you hold sand tightly in your hand, it'll spill out". So said that force of nature, musician/songwriter/ painter the great Joni Mitchell about a former boyfriend.

Similarly, the tighter you hold onto your ruling hypothesis, it seems human nature tends to go towards your being economical with the truth of what you discover. Tony Blair George Bush and the weapons of mass destruction thesis spring to mind.

Confirmation bias is well known, and it is apparent in almost every article written by MPP and his merry gang in relation to bluestone origins, quarried and now the "lost giant circle." Confirmation bias and ruling hypotheses go together, and should be picked up in the peer review process -- but as Wikipedia points out:

"The social process of peer review aims to mitigate the effect of individual scientists' biases, even though the peer review process itself may be susceptible to such biases[92][93][86][94][95] Confirmation bias may thus be especially harmful to objective evaluations regarding nonconforming results since biased individuals may regard opposing evidence to be weak in principle and give little serious thought to revising their beliefs.[85] Scientific innovators often meet with resistance from the scientific community, and research presenting controversial results frequently receives harsh peer review.[96]"

It's to do with psychology ad well as science.
https://en.wikipedia.org/wiki/Confirmation_bias

The geologist Thomas Chamberlin in the year 1890: There are two fundamental classes of study. The one consists in attempting to follow by close imitation the processes of previous thinkers, or to acquire by memorizing the results of their investigations. It is merely secondary, imitative, or acquisitive study. The other class is primary or creative study. In it the effort is to think independently, or at least individually, in the endeavor to discover new truth, or to make new combinations of truth, or at least to develop an individualized aggregation of truth. The endeavor is to think for one’s self, whether the thinking lies wholly in the fields of previous thought or not. It is not necessary to this habit of study that the subject-material should be new; but the process of thought and its results must be individual and independent, not the mere following of previous lines of thought ending in predetermined results."

I quite like the characterisation of researchers who are utterly convinced of the rightness of their ruing hypothesis as "secondary, imitative or acquisitive". In other words, inferior and simply lazy........

Quite so -- thanks for spotting. RULING hypothesis! Mind you, that's quite an entertaining error.......