The absurdity of the quarrying hypothesis (2) 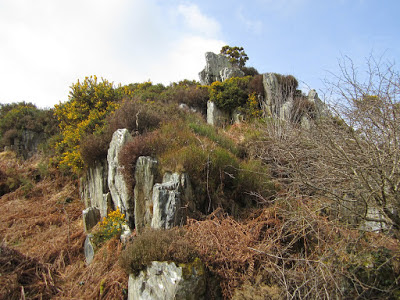 "Miles from anywhere, lost in the jungle, and down in a deep valley.  With a horrible rock type too.  Ah yes, the perfect place for a bit of reverential quarrying.......let's do it!!"

In their rather weird podcast about Waun Mawn and all things related, the Prehistory Guys (Messrs Soskin and Bott) got most things wrong, but they did get one thing right -- namely the complete absurdity of the bluestone quarrying hypothesis.

As they pointed out, to attach importance to the Rhosyfelin "quarry" as a source of Stonehenge bluestones is pretty preposterous, since there are no monoliths at Stonehenge made of the foliated rhyolite that has been identified as typical of the Rhosyfelin outcrop.  There are chips and fragments of the "right" rock type in the debitage, but that is all.  To make matters even worse, if Carn Goedog really was a Neolithic bluestone quarry producing spotted dolerite monoliths, and if the stones taken from it were really "parked up" for 500 years at Waun Mawn,  why are there no traces of the right spotted dolerites in the "lost circle"?  MPP and his colleagues speculate (on the basis of one fragment, one standing stone and three recumbent stones) that the standing stones that were at Waun Mawn were unspotted dolerite.  And if the supposed stone circle at Waun Mawn was desirable enough to be dismantled and shipped off to Stonehenge, why did the locals only take some stones away and leave others behind?

The Prehistory Guys might well have added, if they had been better informed, that the great bulk of the bluestone monoliths at Stonehenge have clearly not been quarried at all -- they are rounded, faceted and heavily weathered boulders and slabs, with just a few of them elongated enough to be called pillars.  They have been out in the open for hundreds of thousands thousands of years, as cosmogenic dating will eventually reveal.  Only the pillars in the bluestone horseshoe could be deemed to be the "products of human intervention", since they are clearly shaped from larger blocks of stone, some of them in quite a sophisticated fashion.

They might also have added that the sheer number of different rock types included in the "bluestone assemblage" indicates that there was no preferential collection of especially desirable rock types.  This was pointed out long ago by Olwen Williams-Thorpe and others. There are around 30 different rock types at Stonehenge; there cannot possibly have been 30 West Wales quarries.  In any case, if we look at the megalithic monuments in West Wales (cromlechs, standing stone settings, circles, gallery graves etc) it is demonstrable that the builders simply used whatever rocks were immediately at hand.  They did not travel great distances to collect up "desirable stones" from quarries.

And why would they be stupid enough to quarry for rock in difficult locations when the landscape was -- and still is -- littered with boulders, slabs and pillars of all sizes and of many different lithologies?

"Ah yes," say the archaeologists.  "This is all to oversimplify and to misunderstand the Neolithic mind.  This is all about reverence and ritual.  The really important thing about the stone collection enterprise was the act of winning the stone and overcoming great physical difficulties -- and even suffering for the cause -- in wild and magical places while working together as a community and showing great reverence towards the ancestors."  Brings to mind the head-banging monks in Monty Python and the Holy Grail.......

And so the archaeologists continue to dig, encouraged by their cameraderie and sense of common purpose and by the belief that common sense is of no significance whatsoever in the matter of the Stonehenge bluestones.

I share your frustration about all this nonsence and about those blinkered enough to accept without question, all this guff, without any real investigation or analysis of the facts.

I concur entirely with our friend's last comment; and, indeed, with exactly what Brian has expressed.

The only possible motive for Parker Pearson continuing on and on like a broken record, as well as sheer hubris, can be that he believes he can fool SOME of the public SOME of the time perhaps especially in North America where " Gosh!" goes down great with the more gullible and less informed. Oh, and lots of UK readers of the tabloid press, also, very sadly, of the magazine "Current Archaeology" .

Totally agree and I speak as an archaeological tour guide. It is so frustrating as I have to explain time and again through gritted teeth that anything they have seen/ heard/read about the quarry, Waun Mawr, and MPP are unproven unscientific nonsense and recommended they read the Bluestone Enigma

Thanks, Unknown! I don't normally accept anonymous comments, but since I am all-powerful on this blog I'll make an exception in your case, since the fact that you hide your real name is of considerable significance. What will the thought police and the archaeology establishment do to you if they were to discover your real name? Hmmm.......

And of course there is a newer edition of the book now, called "The Stonehenge Bluestones." Available from all good bookshops......


I am currently having similar, exasperated problems to those of this archaeological tour guide........in a different sphere of knowledge, i.e. discussions on the subject of to vaccinate or not to vaccinate, within the wider family, wherein are one or three 'New Agers'.....but, as I say, not unlike the 'flat weather's who congregate around the maestro pied piper [code!].

'flat weathers' should of course have said ' flat earthers '. So much for helpful predictive text!

Tony, your predictive text monster is a source of constant wonderment and entertainment. Life would be very dull without it.

Glad you ( and others....maybe some Quarrying Believers?) are entertained. But I am doing splendidly and have been on Radio Somerset TWICE this week too! My life is full of spectacular occasions, always starting with Irish Republic porridge.... And whenever I type in "Preseli" great care is needed, I may instead end up with " Israeli ", just one example. Maybe my Kindle is Irish as well as my porridge? Answers please.

Thinking of the pressure to conform and the fear of rocking the boat, I was quite intrigued, on listening to the podcast about Waun Mawn by the Prehistory Guys, to hear of their frantic efforts to explain that in their original YouTube piece they were not being critical of MPP at all, in spite of the fact that that is what it sounded like. And having explained in the podcast that the Neolithic quarrying hypothesis was nonsense, they then tied things up by explaining that although it was nonsense, they were perfectly convinced by it. It is all too apparent, to anybody listening carefully, that the MPP bovver boys have been putting the frighteners on our two heroes, and that all they really want is a quiet life........