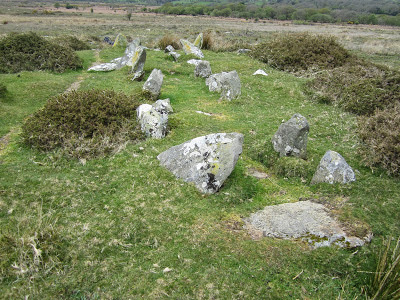 
I think it may be wiser to refer to these two features (one at Banc Llwydlos and the other at Penanty-isaf) as potential gallery graves, rather than passage graves.  I'll adjust the titles of the posts accordingly.

According to the big chapter by Darvill and Wainwright in the latest Pembs County History series, Neolithic passage graves were generally chambers covered by substantial mounds with one access passage within.  The passage was just a means of access to the chamber used for burials. They may have had side chambers used for the placing of corpses or bones or cremated remains. Gallery graves, on the other hand, may not have had large covering mounds looking like round barrows or long barrows, although they may have had a complete elongated "roof" made of slabs or capstones. Some are wedge-shaped.  Burials took place in the elongated gallery.

Bedd yr Afanc is classified as a gallery grave, while Cerrig y Gof, near Newport, is classified as a passage grave with a cluster of internal chambers.  Others refer to it as a chambered tomb. (I'm not sure why Darvill and Wainwright (p 92) refer to it as a passage grave, since there was apparently no internal passage.......... but we'll let the experts argue about that....)

It's wise to go with the flow here so as to avoid confusion.  It's clear that the Banc Llwydlos and Penanty-isaf features are nothing like Cerrig y Gof or the other dolmens or portal tombs of west Wales (for example, Carreg Coetan Arthur or Pentre Ifan) -- but they are very similar to Bedd yr Afanc.

Passage grave --a prehistoric megalithic burial chamber of a type found chiefly in western Europe, with a passage leading to the exterior. Passage graves were originally covered by a mound, which in many cases has disappeared, and most date from the Neolithic period.

Gallery grave -- an underground megalithic burial chamber which may be divided into sections but has no separate entrance passage.
Posted by BRIAN JOHN at 09:02

I would like to ask a question: if its already been asked before please direct me to that section. If the glaciers came inland towards Stonehenge from the Bristol Channel, shouldnt there be some evidence or indications of that? For example a regularity that exists in an uninterrupted trace back to the coast line, that differs from isolated regions?

Mitchell -- we have discussed this issue in great depth. I suggest you do some searches on the blog -- try looking up "Irish Sea Glacier" or "Somerset" or "ice directions" or "erratic transport" -- and see how you get on!

The short answer is that there should be glacial traces along the course that the glacier followed. And indeed there are -- at least as far as Somerset. What happened to the east of Somerset is still a matter of dispute!