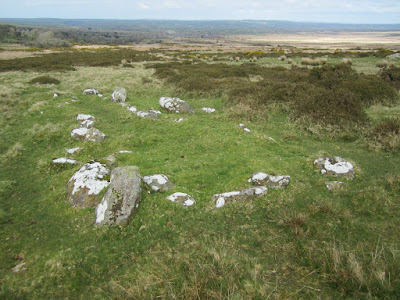 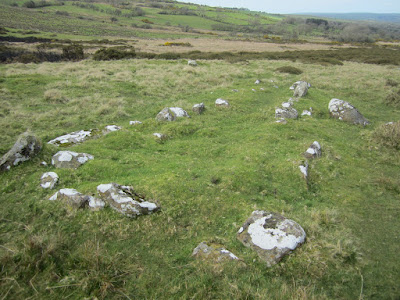 Thanks to Emyr Jones and others, I was encouraged to go on a gallery grave hunt today, and sure enough I found the one which has been discussed at some length on Facebook and elsewhere.  I'm no expert on gallery graves, but I am convinced -- and I hope that the experts will go and take a look at it..........

The grid reference for this is approx SN 087332 -- it's about 50m NW of the Banc Llwydlos cromlech, and about 100m downslope of the recently burned area.  It is also about 250m from the long fence of the enclosed land belonging to Tafarn y Bwlch.  About 30m to the NW there is a stream gully, but the grave site itself is on dry and grassy land.

The feature is about 12m long, with its open end to the N and its closed end to the S. The "passage" is about 1m wide, and the raised banks are each about 1m wide, revealing many exposed boulders.  The grassy "gallery"  is about 50 cms above the level of the surrounding grassland.  Around 35 boulders are visible in the embankments.  The closed end is about 2.5m wide, and the banks converge towards the open (northern) end.  So there is a wedge shape, as at Bedd yr Afanc.  To the east of the eastern bank there are two large "outlier" boulders -- maybe they are in their natural positions.

Was this feature a real gallery grave, with supported slabs or capstones along its full length?  Maybe -- and maybe these fallen slabs are buried beneath the turf.  Excavation needed!  There are certainly a lot of similarities with Bedd yr Afanc, which is about 2.5 km away.

The site has been investigated by Murphy and Wilson (2012) and is also referred to by Darvill and wainwright on p 93 of the latest Pembrokeshire County History volume.

I have discovered this in another excellent Dyfed Archaeology publication:

PRN 100700 is a possible ‘passage grave or chambered tomb’. It is situated to the east of a stream on a gentle NE facing slope of Banc Llwydlos at 260m above sea level. The stone setting is aligned roughly N-S and is widest at its southern end where the stones appear to form a 'chamber' up to which a narrow linear 'passage' runs from the entrance at the northern end. It is very similar in construction to the scheduled ancient monument Bedd yr afanc chambered tomb that lies just over 2.5km to the northeast (PRN 1032, SAM PE122), and in the same topographical position on the edge of boggy ground.
The site was recorded by P Drewett in 1984 as a ’multiple stone setting/passage grave’ but had not been recorded on the HER before now.

Here is the plan drawn up by Murphy and Wilson: 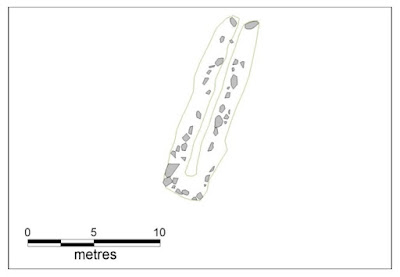 Here is the map of the area, as published in the Report: 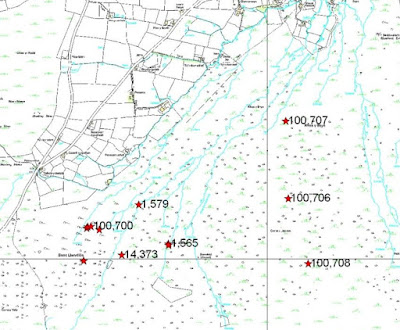 Note that Murphy and Wilson refer to PRN 100700 as a ‘passage grave or chambered tomb’ -- it's clear that there are considerable differences over terminology!

Note also that 4 features are shown very close together around position PRN 100700 -- the Banc Llwydlos "cromlech" is one of these.
Posted by BRIAN JOHN at 21:29

Perhaps MPP & Co will be inclined to investigate this including a possible excavation in the next year or two. They appear to have the inclination and the funds.