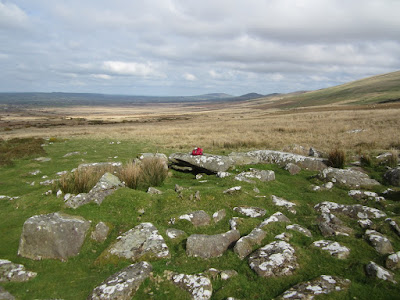 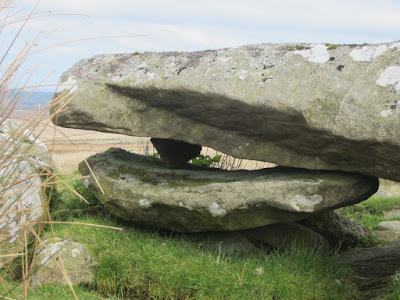 The Dyfed Archaeology fieldworkers have expressed the view that this small feature at Banc Llwydlos (PRN 100702) is simply a "small sub-circular enclosure'' or "stone built structure" -- they do not define it as a burial site. This is intriguing, since the feature has quite close parallels elsewhere....

See this, on Scillonian entrance graves:

From Wikipedia, the free encyclopedia

The entrance graves of Cornwall and the Isles of Scilly, and south east Ireland are megalithic chamber tombs of the Neolithic and early Bronze Age in the British Isles. Comparable sites are also known in Brittany and the Channel Islands. They are generally known as the Scillonian group as the greatest concentration of the tombs is found on the Isles of Scilly.

Examples include Bant's Carn and the Innisidgen and Porth Hellick Down tombs, all on St Mary's.

They consist of a narrow entrance which leads into a rectangular burial chamber covered by a small round stone cairn usually revetted with a kerb. In some examples a sill stone blocks the entrance. The walls of the chamber themselves are of either orthostat slabs or stone courses, covered with several large capstones. Both the cairn and the chamber often exploit natural stone outcrops or boulders in their construction.

Entrance orientations in Scillonian graves follow no discernible pattern and they appear to have been used for deposition of multiple cremation and inhumation burials with up to 60 individuals found at Knackyboy Cairn on the island of St Martin's. Occupation debris has also been found in the graves which implies that they were actively used sites possibly for wider ritual purposes and/or as territorial markers.

The small size and simplicity of these monuments compared with the more complex tombs being built elsewhere in Britain imply that the areas where they are found preserved older methods of burial. The earliest known finds from Scillonian entrance graves include fragments of middle Neolithic Carn Brea type ware and have led some archaeologists such as Paul Ashbee to argue that they are in fact of early Neolithic or even Mesolithic date. Much of the Bronze Age material excavated from entrance graves is considered to be related to later re-use.

The island of St. Martins is home to one of the most populated tombs in British prehistory, containing the remains of up to sixty people. During the Early Bronze Age people were buried in entrance graves: roughly circular structures made of stones and soil that overlay a rectangular-shaped chamber and were surrounded by a kerb of boulders. It was possible to enter the chamber from outside and people were placed in these tombs over a period of years. Tombs of this type are confined to the Isles of Scilly and a small area of the mainland in West Penwith, Cornwall, Tramore, Ireland and small numbers of similar monuments are known in the Channel Islands and Brittany.

Here are the traces of two of these entrance graves, the first on Gugh Island and the other on Tresco: 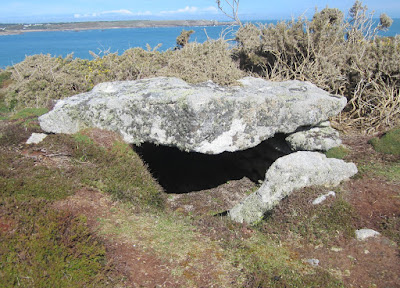 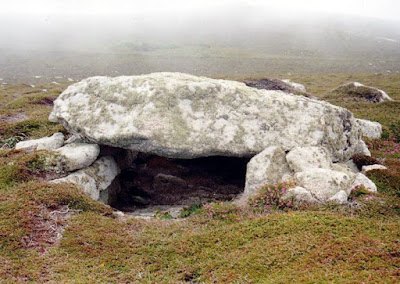 Here is another example of a propped slab or earthfast cromlech -- this is from St David's Head. 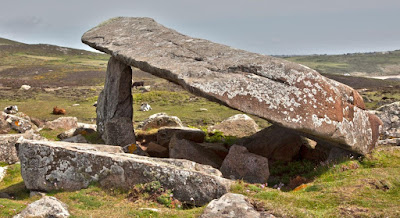 In the case of Banc Llwydlos, the prop is not so spectacular, and is indeed rather crude, but there is no doubt that the "capstone" is propped up, and Murphy and Wilson suggest that it is supported at both ends.  That is not the sort of thing you find in hut circles or animal enclosures  -- so the general drift has to be in the direction of a burial site.  Simple tombs of this type are sometimes referred to as "sub-megalithic", and evidence suggests that they may be late Neolithic or early Bronze Age features.  This means they are intermediate between the very spectacular and technically advanced "portal dolmens"and the much simpler cist graves that became popular in the Bronze Age.  At the same time long barrows were giving way to smaller round barrows with smaller chambers or stone-lined "boxes" inside them. 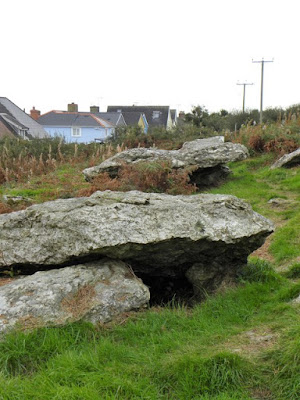 Two of the simple chambered tombs at Garn Wen.  Each of the three (or four) tombs here is assumed to have been covered by a low mound of earth and stones.

In some of these, the burials appear to have taken place in a very small chamber beneath the capstone.  In others, the chamber extended behind the capstone, possibly roofed over with other stone slabs which have subsequently broken or collapsed or been taken away for other uses.  In some illustrations, there are suggestions that wooden beams or tree trunks were used, which have by now of course rotted away completely -- this might explain why, in some situations (such as Banc Llwydlos), there is a hollow bounded by raised embankments.

I'm struck with the similarity with the small "entrance grave" tombs of Cornwall and the Isles of Scilly -- but I suppose that until this site is excavated,  my guess is no better than anybody else's.