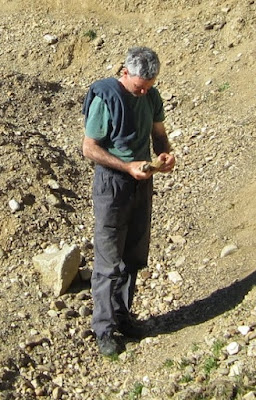 I thought I should share this.  Good for Danny!

I must confess that being proven wrong is not a new experience for me. My interpretation of the very thick glacial sediments of western Llyn, in North Wales, as meltout till, for example, fitted a paradigm that was popular at the time but has since been falsified (McCarroll & Harris 1992). I also produced several papers arguing that carbon isotopes in Arctic tree rings could be used to reconstruct summer temperature (McCarroll et al. 2010), which my younger colleagues demonstrated was not true (Young et al. 2010; Gagen et al. 2011). However, as a scientist there is no shame in being wrong because falsification of hypotheses is how we make progress (McCarroll 2015). If you are afraid of being wrong you will never have the confidence to publish anything of interest. We should, however, try to learn from our mistakes.
Posted by BRIAN JOHN at 20:55

Ah he is in good company.

In the 1990s Dr I was amongst the authors of the famous OU paper saying that glaciers were responsible for the transport of the bluestones.
Many a bitter tear has been shed since.

'Never look back and you cannot be blinded by hindsight'

I think it is a common experience for most research scientists that have published well/often and have lived a long time.
Myris

Oh dear -- Dr I has shed tears unnecessarily, since despite what you might try to say to us, the glacial transport of the bluestones has not been falsified. When? Where? On what basis? Perhaps you know something that the rest of us don't know? I doubt that. Some of the bluestone provenancing might have been wrong in the old days, but that's what happens as newer techniques come along. No need to shed tears over any of that.......

And be very happy that the bluestone quarrying nonsense has been falsified, by your own radiocarbon dates and by somebody coming along and doing some decent geomorphology. And publishing it. Move on cheerfully, Myris!

It is very unusual to see the word "falsified" used in this sense. "Proven wrong" would do nicely.

Definition (one of two):
prove (a statement or theory) to be false.
"the hypothesis is falsified by the evidence"
synonyms: disprove, show to be false, prove unsound, refute, rebut, deny, debunk, negate, invalidate, contradict, confound, be at odds with, demolish, discredit.