The matter of the "single Rhosyfelin monolith"

Now that Prof MPP seems to be backing away from the thesis that there was a Neolithic monolith quarry at Rhosyfelin, what do we have in its place?   Apparently (and we have to have this confirmed) the latest thought is that just one stone was taken from Rhosyfelin -- from the so-called "extraction point" near the tip of the spur and close to the sampling point 8 referred to by Ixer and Bevins.  We have already devoted a lot of attention to this issue on this blog.  Just type "extraction point" into the search box........

It's worth pointing out that that thesis is already well and truly falsified by the geological work.  Ixer and Bevins have shown that there are various types of rhyolite represented in the debitage and in the bluestone assemblage at Stonehenge -- and they have also shown various types of foliated rhyolite from the Pont Saeson - Rhosyfelin area.  In fact the famous "Jovian fabric" is pretty variable too, and I have disputed the contention that some of the fragments found at Stonehenge can be provenanced to "within a few square metres" since nothing at Stonehenge matches exactly the geochemistry and the thin section information given to us for Point 8.

The more I look at the published thin sections and associated geochemical information, the more convinced I become that the closest match of all is between sample OU18, taken from the Stonehenge Avenue, and sample PS10 taken from an outcrop on the valley side a few hundred metres south of Rhosyfelin, where there is a sharp bend in the river gorge.  These are the two samples: 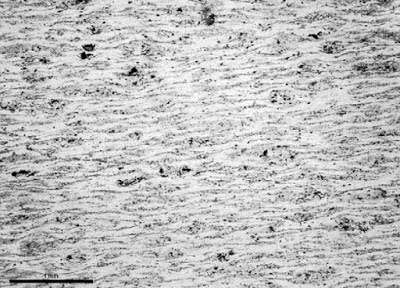 Sample OU18, from the Stonehenge Avenue 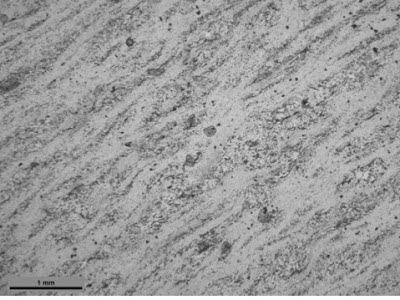 Sample PS10, from the valley side south of Rhosyfelin

Note that the fabric alignment is not the same on the two slides, and that the interconnecting lattice structures are on a larger scale in sample PS10 -- but otherwise the fabric is very similar indeed.

How much longer will it be before the quarrying fraternity comes to terms with the fact that we have at Stonehenge a scatter of fragments (and maybe one or two monolith stumps) that appear to have come from the Pont Saeson - Rhosyfelin area, having been entrained and transported by overriding ice?

Where is PS10 figured?

You only show your arrogance in thinking that you can interpret these rather difficult textures after a glimpse of a few photomicrographs. The pet rock boys have looked at many many tens maybe close to 100 thin sections of the Cryf outcrop and debitage (and probably more sections from the surrounding area) in transmitted and reflected light probably many man-months in time plus all the geochemical work and you with NO petrographical and bugger all geological training think you know better. Routine petrography on a section takes a minimum of a day.

You have obviously NOT understood at all the importance of the most recent compelling zircon dating evidence.

Work out the fabric of CRyf namely the strike and the time sequence 'dip' through the outcrop and you will see how silly PS 10 is as a suggestion. True it is a Group A-C Craig Rhosyfelin quarry rhyolite. But it is NOT Jovian.

Do your bloody homework first and admit your limitations.

Yes, you are probably a very brilliant petrographer, and I am an arrogant and ignorant amateur, and you have no doubt looked at loads of thin sections from the Rhosyfelin area -- but I am still not convinced by your claims about a few square metres. It's about time you showed us the hard evidence instead of telling us how incredibly learned you are. "Trust me, I'm an expert" gets you only so far in this life.

You are asking me where PS10 is figured? Don't you know your own publications?

Who's talking about Jovian fabrics here? Not me, that's for sure. Read what I say and not what you think I say.

You seem to be missing the whole point of this post.