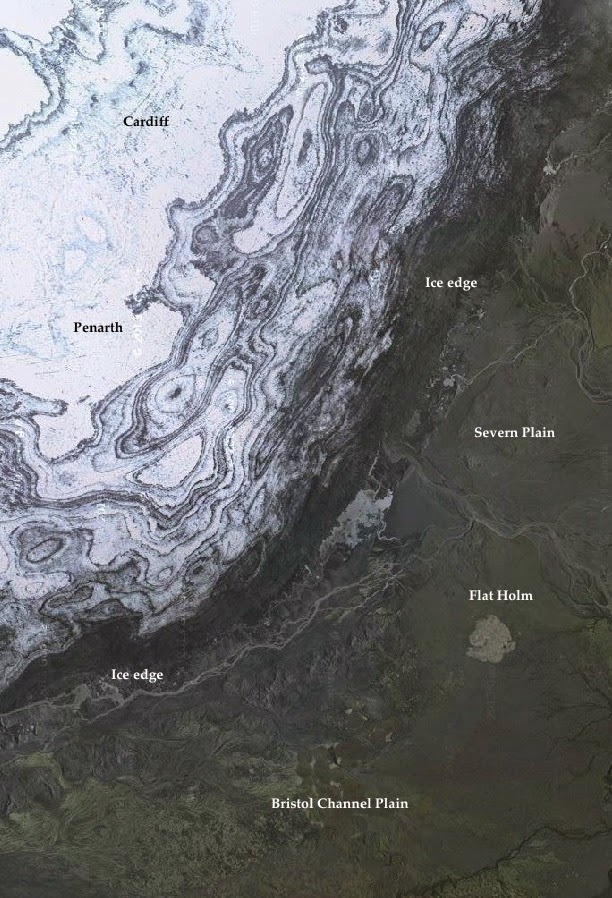 Let's imagine the landscape around Flat Holm as it was about 20,000 years ago....

One of the benefits of modern technology is that we can reconstruct or recreate environmental conditions as they may have existed in the past.  There is a certain amount of intuition or imagination involved, but even without the wonders of computer generated graphics, in the geomorphology field we can search with Google Earth for analogies where the predicted set of circumstances may still apply, and do a little doctoring on the images that we can copy and save.

So here is my attempt to recreate the conditions that might have applied  at the mouth of the Severn Estuary (or Severn Plain, as it would have been then) around 20,000 years ago, at the peak of the Devensian Glaciation.

The ice edge in this photo is very spectacular, since it actually shows the edge of the Vatnajokull Ice Cap in Iceland, where the extraordinary surface patterns are the result of many ash layers collecting on the ice surface during the life of the ice cap  and then becoming exposed in the ablation zone, near the snout, thousands of years after they were created.  So ignore those, and just note the position of the ice edge.  Around 20,000 years ago, Penarth and Cardiff might well have been submerged beneath the ice that was streaming out of the valleys of the South Wales Coalfield and coalescing as a piedmont glacier in the coastal stretch between Cardiff and Newport.  We'll call it the Taff Piedmont Glacier.  Remember that sea level will have been c. 120m lower than it is today, so the whole of the Severn Estuary - Bristol Channel area would have been dry land.  Well, not all that dry........

Most of the area now submerged beneath the sea will have been an undulating tundra plain, with abundant small temporary lakes and many braided meltwater streams flowing away from the ice edge and towards wherever the low parts of the landscape might have been located.  If you click to enlarge the image you can see some of the characteristics of such a tundra plain.  It would have been a treeless plain, with widespread grassy and boggy areas and also areas of dryer heath.  Accumulating sediments in the valleys were carried by meltwater streams, and there must have been extensive permafrost.  Almost certainly, the plain would have been inhabited by the tundra animals of the time --  mammoth, cave lion, woolly rhino, musk ox, giant elk, hyena, aurochs, cave bear and many others.  There were human beings too, hunting on the plains and occupying caves on Gower, South Pembrokeshire and maybe Flat Holm too.

As the sediments of the meltwater streams accumulated, the higher parts of the land would have appeared as "bedrock islands" above the tundra plain.  This is suggested on the doctored image above.

Later on, following the melting and disappearance of the ice, the River Severn must have been a powerful influence in landscape development, carrying huge volumes of meltwater from the melting ice within its natural catchment area in the Welsh Borders.  Some of the meltwater will have come from the melting glaciers of the Usk and Wye valleys, and some from the melting ice of the Irish Sea Glacier, which had a maximum Devensian position south of Shrewsbury, near Bridgnorth.  The precise course of the river at this time is not known.  It might have passed between Lavernock Point and Flat Holm; or between Flat Holm and Steep Holm; or between the latter island and Brean Down on the English side of the channel.  The river could well have carried erratic stones and boulders from the Severn catchment in blocks of floating glacier ice or in seasonal river ice.

The sea then started to flood back into the Bristol Channel and into the estuary, and by 7,000 years BP it was within about 4m of its present position.  That means that high tides would have been flooding in past Flat Holm and Steep Holm into the mouth of the Severn, as it is called today. That would have initiated a final phase of sediment sorting around the islands,  with pebbles and boulders from many different sources mixed up during upstream and downstream flows and during stormy phases. Many of the smaller stones and pebbles might have been driven by wave action closer and closer to the present-day beaches of the islands as sea-level rose through the final 4m -- but we must not forget that large amounts of sediment will still be more or less in situ, having been brought into the area during the Anglian Glacial episode and possibly the Wolstonian glaciation as well.

This thread is amongst the best you have done.
M

Thanks Myris -- glad somebody is reading it! It's always interesting to look at a bit of new (for me!) territory and to try and work out what has been going on.

I agree with Myris. Personally not ably to inform this discussion but very glad to be informed and hope some experts in the field can decide to join in constructively.