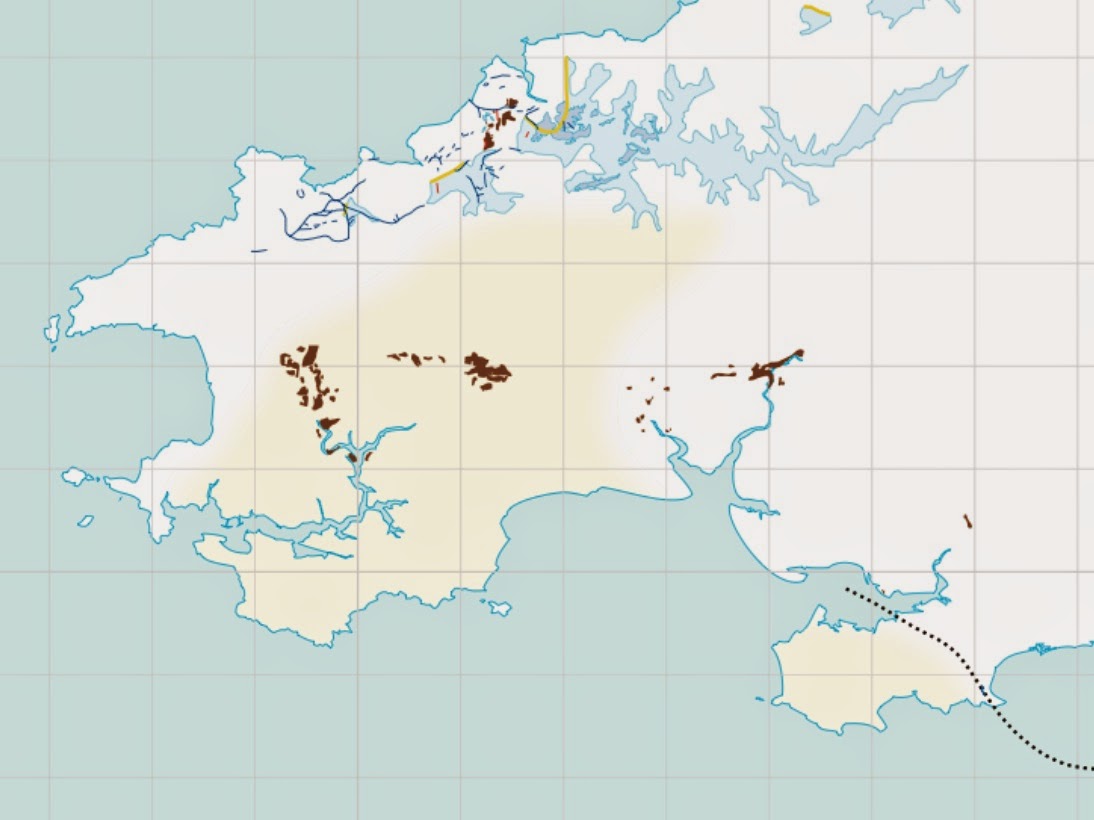 This is the relevant piece of the BRITICE map of glacial deposits and other features relating to the Last Glaciation.  It's a few years old now, and new information has made parts of it look dated, but it was the state of the art summary when it was published, and it's still a valuable aid to future research.  The whole map is in two sections available for download -- northern and southern sheets.  This extract is from the southern sheet.

Let's forget about the north Pembrokeshire features for the moment and concentrate on those of central Pembrokeshire.  The patches of glacial deposits (gravels and till) shown are generalised from the BGS Geology of Britain map at the 1:50,000 scale.  Those of the Western Cleddau valley are well shown, as are the sand and gravel patches to the east of Haverfordwest, in the Clarbeston Road - Clynderwen area.  But the patches to the north, in the foothills of Preseli, are not shown, probably because they are not extensive enough.  But they are rather intriguing, as I suggested yesterday.  What do they tell us about the glacial history of West Wales?  I'm on the case......

I have just discovered your fascinating blog and as a geological novice, but with a strong interest in local geology, I am enjoying reading through your blogs. I live in Barry and have had a lifelong fascination with the geology of the Glamorgan heritage coast. having said that, my query related to a feature just north of Cardigan town, which we pass frequently while staying in our caravan at Gwbert: On the A487 climbing north out of the town we approach at the top of the hill a conical hill-like feature on the right of the road. On the left is a quarry where sand is extracted. I have assumed this hill to be a glacial drumlin or some such similar glacial feature. Are you able to confirm if this is so please? Meanwhile I shall continue reading through your inspiring blog.
Kind Regards
Phil Dawson.

Hi Phil
Welcome to the blog! That hill near Penparc is a very famous one -- it's a classic example of a kame, formed at a time when the Devensian ice was wasting rapidly in this area, and when very large meltwater streams were depositing all the sands and gravels that we now see in the sand / gravel quarry across the road. Where pits form in the melting ice, they attract meltwater flow, and fluvioglacial materials accumulate in the pits and sometimes even fill them up. Then when the ice finally melts, the topography is inverted, with the "pit fill" converted into a conical -- or sometimes flat-topped -- mound.