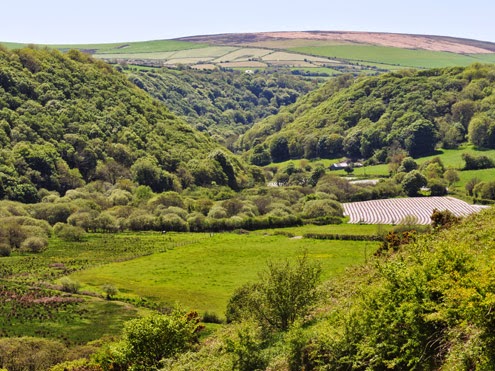 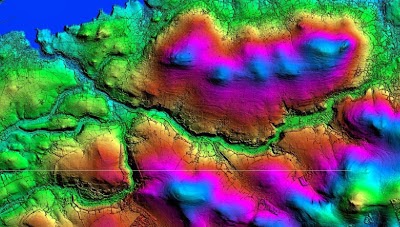 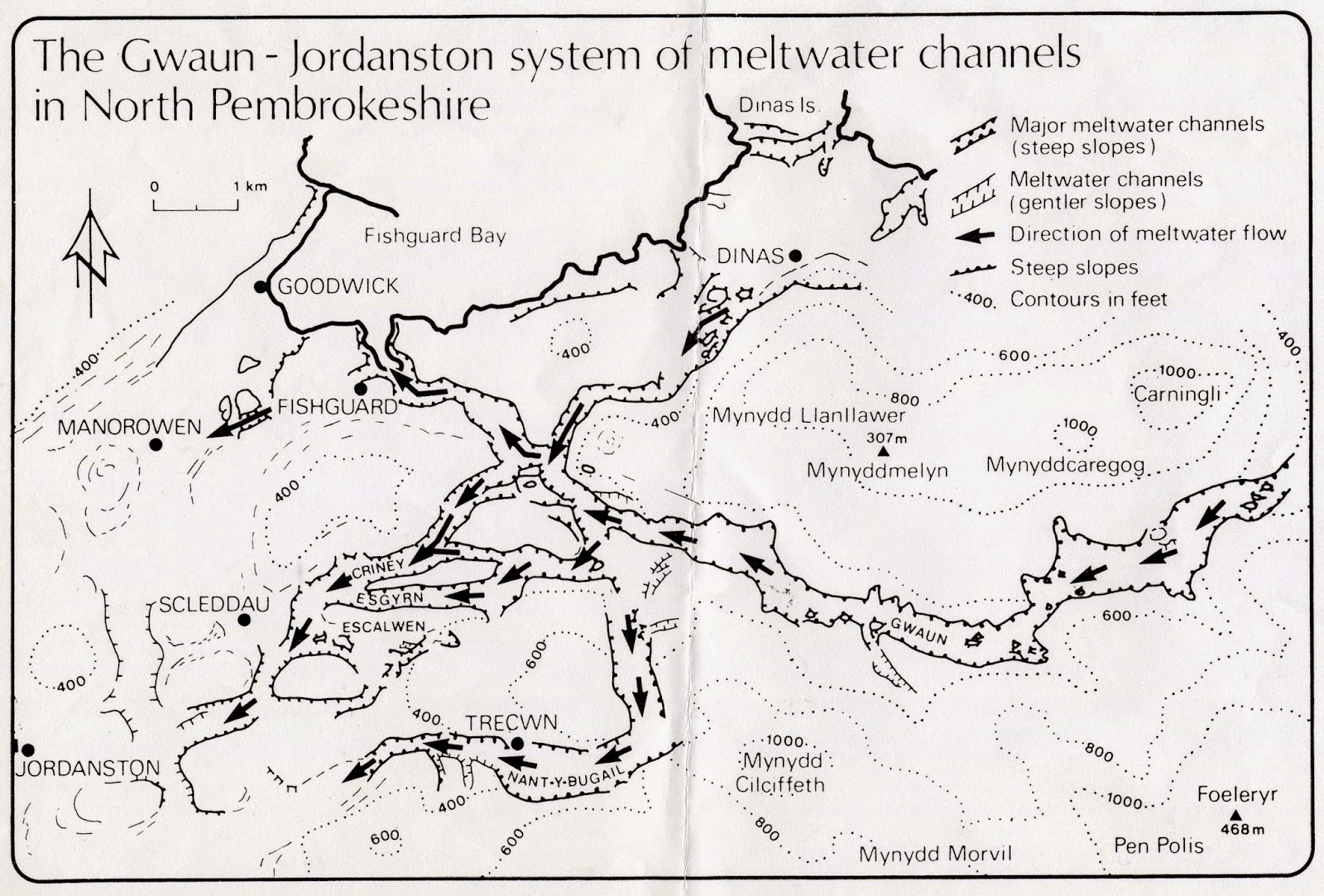 The Quaternary Research Association is seeking nominations for the 50 most important Quaternary sites in Britain.  This is my first nomination.  Citation as follows:

The meltwater channel complex inland of Fishguard is one of the most spectacular in the British Isles.  It is generally referred to as the "Gwaun-Jordanston subglacial meltwater channel system" because it extends over a distance of 14 km E-W and 8 km N-S.  The main channel is over 12 km long, and cuts a curving swathe through the northern foothills of Preseli, in effect isolating the upland of Carningli and Dinas Mountain from the rest of Preseli.  The channel is steep-sided and flat-floored.  For more than half its length it has no feeder or distributary channels, but at Llanychaer the system becomes highly complex, with an anastomosing pattern evident.  Meltwater has spilled westwards through the Criney, Esgyrn, Llanwern and Nant-y-Bugail channels, with further bifurcations near Scleddau. There is one big right-hand bank feeder channel at Cwm-onen, which has carried meltwater south-westwards from the north-west face of Mynydd Dinas.  In addition to these major features there are abundant smaller "hanging" channels, rock knobs and steep chutes, some of which still carry small streams falling through cataracts.  Smaller shallow "overspill"channels also occur on many interfluves and spurs.  All of the major channels have humped long profiles.  There are abundant glacial, fluvio-glacial and periglacial deposits within the channel walls, in places masking channel floors to a depth of tens of metres.  Holocene peats and other organic-rich sediments are also widespread, particularly in the Esgyrn and Criney Channels.

It was proposed by Charlesworth in 1929 and 1963 that the channels were all formed by meltwater spilling westwards from a series of pro-glacial lakes impounded against the face of Mynydd Presely by Devensian ice which left behind abundant traces in the "South Wales End Moraine."   Glacial Lake Teifi was proposed as the largest of these lakes, but Charlesworth also referred to Lake Nevern, Lake Gwaun and Lake Manorowen.  The channels were therefore designated as "overflow channels".  However, as pointed out by Bowen and Gregory (1965), John (1970) and many other researchers subsequently, the geomorphology and sedimentological features of these channels point clearly to formation beneath wasting ice by meltwater flowing under hydrostatic pressure.

It is assumed by some researchers (eg. Campbell and Bowen, 1989) that the channel system is of Devensian age.  On the other hand John (1970) argued that the channel system is so complex, with so many "hanging" channels and other disconnected features, that it must be of composite origin and age.  His current favoured hypothesis is that the channel system dates back at least as far as the Anglian glaciation, and that it has been re-used by subglacial and surface meltwaters several times since then.  Since Glacial Lake Teifi is now thought to have been formed during a phase of ice advance across the north Pembrokeshire coast (rather than during a phase of ice wastage, as assumed by Charlesworth) it is difficult to imagine that the lower part of the Gwaun Channel can have been used by escaping meltwater, let alone being created at this time, in view of the fact that such a scenario would have involved meltwater flowing directly against the prevailing regional ice surface gradient.

It is now proposed that the channel complex was initially cut by subglacial meltwater flowing under the control of an ice surface gradient sloping from NE towards SW.  That means that ice from the Welsh Ice Cap must have been dominant at the time, and that the Irish Sea Glacier was either absent from Cardigan Bay or incapable of resisting the ice flowing from the Welsh uplands. Virtually nothing is known of such a glacial episode.   Most of the other evidence from West Wales indicates that the dominant ice flow across this area was from NW towards SE, during both the Anglian and Devensian glacial episodes.  Much work still needs to be done before the history of Pleistocene landscape change in this region is fully understood.  But the channel complex is both spectacular and important for the elucidation of Pleistocene history in Wales.

This is a very beautiful river valley and deserving of protection. I suppose the communities in Fishguard and Nevern must have been rivals in the past.

Maybe they were -- but the valley has a fiercely independent community that wants nothing to do with either Fishguard or Newport! People who live in towns are not to be trusted........