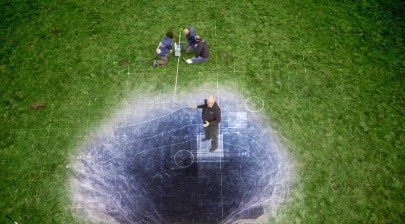 Vince Gaffney's work is hitting the media today -- in advance of the TV programme tomorrow.  It looks as if some really interesting new info is coming out here --but even before the programme is screened one wonders where facts end and fantasy begins. I thought we knew that there was a considerable "ritual landscape" around Stonehenge, with lots of features of different ages?  And "17 new chapels"??!!!  Nonconformist, I hope.......  The hype is already considerable -- those "gigantic" new pits in the Cursus turn out to be be just 1.5 m deep.  Bizarre burial rituals?  Prehistoric piss-ups at Stonehenge?  Are they trying to outdo MPP's wonderful beef-burger barbeques at Durrington?  Anyway, let's not be too cynical... and let's see what the programme has to say.


Stonehenge stood at the heart of a sprawling landscape of chapels, burial mounds, massive pits and ritual shrines, according to an unprecedented survey of the ancient grounds.

Researchers uncovered 17 new chapels and hundreds of archaeological features around the neolithic standing stones on Salisbury Plain, Wiltshire, including forms of monuments that have never been seen before.

Brought together for the first time in a digital map of the historic site, the discoveries transform how archaeologists view a landscape that was reshaped by generations for hundreds of years after the first stones were erected around 3100BC.

"This radically changes our view of Stonehenge," said Vince Gaffney, head of the Stonehenge Hidden Landscapes Project at Birmingham University. "In the past we had this idea that Stonehenge was standing in splendid isolation, but it wasn't … it's absolutely huge."

He added that around Stonehenge people created "their own shrines and temples. We can see the whole landscape is being used in very complex ways".

The finds follow the discovery, made public early this month, that the monument was originally circular. Researchers said that an insufficiently long hosepipe might have helped them solve one of the enduring mysteries of Stonehenge: whether the monument was originally built as a full circle or a C-shape. A man driving a vehicle with surveying instruments near to Stonehenge where a hidden complex of archaeological monuments was discovered. Photograph: Geert Verhoeven/University of Bi/PA

The hosepipe was used to water grass around the stones, but when it failed to reach parts of the monument patches of brown began to appear. Tim Daw, who helps to maintain the site, noticed that the patches matched spots where missing stones may have stood, making Stonehenge a full circle. The discovery has prompted a fresh mystery around what happened to the missing stones.

Researchers on the surrounding landscape project spent four years surveying 12 sq km of land around Stonehenge. Much of the ground they covered on quad bikes hooked up to trailers carrying an array of technologies to detect structures hidden beneath the ground.

Using ground-penetrating radar and other equipment, they located two massive pits in a 3km-long monument called the Cursus that predates Stonehenge and lies to the north. The pits appear to form astronomical alignments, Gaffney said. On midsummer's day the eastern pit's alignment with the rising sun, and the western pit's alignment at sunset, intersect at the point where Stonehenge was built 400 years later.

"The importance is not that we found yet another set of strange archaeological monuments, but that they have a spatial relationship with Stonehenge," Gaffney told the British Science festival in Birmingham. Traces of another festival were found at Stonehenge in the form of ancient beer pots that drinkers left lying around.

The equipment used in the survey, including radar, laser scanners and magnetometers, was developed by engineers at the Ludwig Boltzmann Institute in Vienna and allowed researchers to map details of the monuments to a resolution of 10cm. The radar technology revealed features up to three metres underground.

One of the most striking monuments to emerge from the survey was a 33 metre-long burial mound containing a massive wooden building whose timber foundations – and a giant upright blocking its entrance – were spotted in the soil. Predating Stonehenge, the building is thought to have been a house of the dead where bizarre burial rituals were played out. "The rituals included exposure of the dead bodies, and defleshing on a large forecourt," said Wolfgang Neuber, at the Ludwig Boltzmann Institute. The house was later covered in chalk and finally became a curious white landmark.

Another large monument north-east of Stonehenge is Durrington Walls, a huge superhenge nearly 500 metres wide. The survey revealed an early stage in the construction of the monument when an impressive row of around 70 massive stones or posts, each perhaps three metres tall, were lined up along its southern border.

The stones or posts were apparently pushed over or laid flat and some may still be found in the ground. Gaffney favours them being pushed over in line with other evidence that ancient cultures were happy to dismantle their monuments. "They did lots of strange things. They killed monuments, changed them, reappropriated them. They developed over many hundreds of years, so the people who started them were not the people who finished them," he said.

The survey revealed more than the intriguing remnants of prehistoric settlements. Among the depressions the researchers mapped out were practice trenches dug around Stonehenge during the first world war where troops prepared for battle on the western front.

"Despite Stonehenge being the most iconic of all prehistoric monuments and occupying one of the richest archaeological landscapes in the world, much of this landscape in effect remains terra incognita," Gaffney said.

"The project has revealed that the area around Stonehenge is teeming with previously unseen archaeology and that the application of new technology can transform how archaeologists and the wider public understand one of the best-studied landscapes on Earth," he added.

Gaffney appears in a BBC2 series, Operation Stonehenge: What Lies Beneath, which starts at 8pm on Thursday.
Posted by BRIAN JOHN at 12:23

"chapels" = gathering of chaps [and chapesses, no doubt, even though pre - Boudicca].

Prof Vince Gaffney is a Geordie (not a Brummy in fact), right enough like, and popped up on the Breakfast Time sofa as fresh as a daisy today, fulla beans. He has clearly infiltrated the S.R.C. And Friends Inner Sanctum of MPP, Pollard,Colin & Julian Richards, Pitts, Cobleigh etc and set up camp along the Greater Cursus....Expect fireworks and pre - industrial language from all directions.

Well, good for him! Always prepared to give support to a good Geordie lad......

loads of (blue) stones found at Durrington but they may be post holes or debri the army left behind.
Stones at Durrington and timber at stonehenge goes against MPP's theories.

Some of them Post Holes* we'll be hearing more about might be for the precursor to The Angel of The North at Gateshead? Unification, and all that, eh?

* longing to hear Vince G attempt to pronounce 'Post Holes' in Geordie. He had a bit of bother saying SOLSTICIAL on BBC Breakfast this morning.

Any new evidence/ suspicions of timber at Stonehenge, then, Pete, so far in the pre - TV programme leaks?

Will have to put the recording thing on: The 'ritual' explanations so far from this team (eg 'procession theory') seem to be based on the inspired imagination of the researchers rather than any actual evidence.

"They did lots of strange things" said Vincent Gaffney

Wells Cathedral stands at the heart of a sprawling landscape of churches, grave yards, limestone quarries,a hospital, public houses, farms, supermarkets, and settlements! according to the unprecedented surveys entitled " Mendip Hills East and West" by the Ordnance Survey of Great Britain and Northern Ireland!

Nowt as weird as folk!

Count myself lucky to live amongst the descendants of the freaks and wierdo's who created the bizarre landscape I currently live in; Unique in the UK and world if you share the reasoning of the Stonehenge archeo's!

What will future archeologists make of it?

21st century Wells, a place of death or Healing? Or a lucrative source of future employment?

Could you please explain the photo in your post? Clearly some composite of sorts. But what is the point here? Or I should say the "hole".

it's a computer graphic, Kostas -- one of several being used to promote the BBC programme to be screened tomorrow. I think the graphic artists have been somewhat over-enthusiastic........

Nothing new in this report over at the techie website The Register, but their sub-editor's creative writing classes are obviously starting to pay off!