On the perpetration of dodgy science

Lately I have become increasingly concerned about the modern trend towards the publication of articles involving multiple authors.  In some fields -- especially where complex laboratory studies are concerned, sometimes involving different teams in different universities on different continents -- keynote articles may appear under the names of a dozen different researchers.  That's understandable, if not very desirable, since modern scientific research is highly complex and hugely expensive.  So in the list of authors for the average paper you might have six or seven key researchers, a technician or two, a couple of lecturers or research leaders who are supervising doctorate students, and one or two heads of department who have been responsible for raising the research funds.  It's important to have "big names" at the head of articles, since that greatly assists in the process of publication.......  cynical, but true.  And senior scientists allow their names to be used, even if their involvement in a piece of research is minimal, because every paper with their names on it goes onto their own CVs and increases their academic status.

But hang on a bit here..........  what if a senior academic has virtually nothing to do with a paper? Should he or she allow his/her name to be used at all?  And what if a senior academic is so powerful that the minions who do the work are simply there to bolster a ruling hypothesis not of their own making?  There have been a number of very high profile scientific paper retractions lately, triggered by junior researchers who were concerned about experimental shortcuts and papers whose conclusions were not supported by their own experimental results.  Senior academics are very powerful people, who can make or break careers -- so it takes a brave junior researcher to stand up and blow the whistle.  And where patents and research grants are at stake, the pressure to conform and maybe falsify results is even greater.

Time to remind ourselves of some of the obligations placed upon authors who publish in learned journals.  This is what one journal says in its guidelines:  “Authorship confers credit and has important academic, social, and financial implications. Authorship also implies responsibility and accountability for published work. The following recommendations are intended to ensure that contributors who have made substantive intellectual contributions to a paper are given credit as authors, but also that contributors credited as authors understand their role in taking responsibility and being accountable for what is published.”

Other guidelines state that authorship should not be conferred on those who do not agree to be accountable for all aspects of the accuracy and integrity of the work.

Some scientific journals, have their own policies that provide more specifics.  One journal states:
“Principal investigators are ultimately responsible for the integrity of their research data and, thus, every effort should be made to examine and question primary data.”

Likewise, Columbia University’s guidelines on responsible authorship and peer review concludes: “Each author should have participated sufficiently in the work to take public responsibility for appropriate portions of the content.”

Lastly, Science journal has this policy on authorship:   “The senior author from each group is required to have examined the raw data their group has produced.”

In the light of all of this, I have been discussing with some geomorphology colleagues recently the perpetration of dodgy science, taking as an example the map of Devensian ice limits which I have used in many posts over the past two or three years: 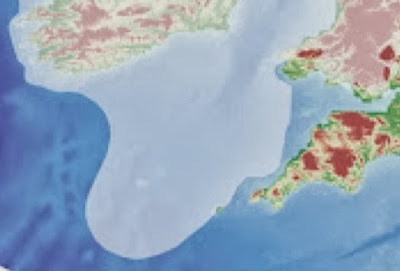 If we home in on the strange kink in the Devensian ice edge in the vicinity of Pembrokeshire, we might ask where on earth this came from.  Is it a drafting error?  Or is it an example of somebody drawing a sketch map at a very small scale and then somebody else interpolating or enlarging it, and putting the line in the wrong place?  Maybe we will never know, but it is certainly the case that this map, or similar versions of it, has been used over and again in a wide range of publications over the past few years -- and every time it gets used it is invested with more "truth."  This is in spite of the fact that any author who takes the trouble to do a bit of research will find out that the line is between 10 km and 20 km away from its position as indicated by the evidence on the ground.  Prof David Bowen and I, and many others, have published evidence showing that the eastern edge of the Devensian Irish Sea Glacier was pressed against the coast of St Bride's Bay and shut off the entrance of Milford Haven.  The evidence on the ground suggests a Devensian ice edge somewhat as shown here by the yellow line: 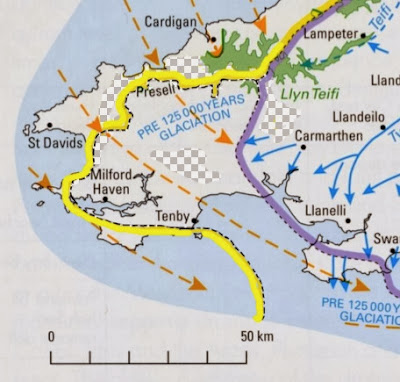 There are at least two reasons why -- in this case -- dodgy science is being perpetrated.

One reason is that the key papers by David Bowen and myself were published many years ago, some of them in the 1970's.  So maybe some of today's research community have not even heard of them, let alone read them.  Sure, any research scientist worth his / her salt will read the literature -- but there is immense pressure these days to be "up to date" and to cite sources that come largely from within the last five years.  So a list of references packed with recent publications (rather than items from the last century!) looks better, and enhances your chances of getting published, especially if you cite the publications of those who are likely to be your referees.  Senior academics have admitted this to me in private conversations.

And the other reason is that in multi-authored papers nobody bothers to check very carefully the reliability of the bits contributed by others.  Maybe some joint authors do have concerns, but fail to challenge their colleagues because they think that might signal a lack of respect and solidarity.  I  have recently talked to three of the authors whose names have been associated with the reproduction of that strange map in relatively recent publications.  All three of them said that they did not really pay any attention to whether the map was reliable or not, and that in any case it was not "their" map since it came from one of the other authors.

That's seriously worrying, given the publishing guidelines which all authors are made aware of, and which suggest that they MUST take responsibility for what is published in their name.  If they do not scrutinize -- and correct -- material which is submitted by colleagues and which is not supported by the evidence on the ground, they are actually harming their own reputations.  More to the point, they are harming science as well.
Posted by BRIAN JOHN at 12:01

but there is immense pressure these days to be "up to date" and to cite sources that come largely from within the last five years.

Yes, very much so. About 20 months ago, I submitted one of my papers to a journal and was told that I should have been up to date and, specifically, included a reference to a recent book (a book that you rather dislike but that I thought was good). At the time that paper was submitted, said book had not been published.

After that, I gave up trying to publish those particular ideas via journals: Just too difficult.