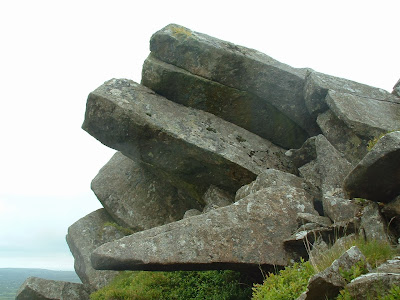 From today's Western Mail --  advance notice of the new paper from Richard Bevins, Rob Ixer and Nick Pearce which will demonstrate the link between eleven of the spotted dolerites at Stonehenge and the outcrops at Carn Goedog.  This has of course been suggested before, several times, but it's good to know that the new research is now confirming the link.

It's highly unusual for a press release to go out before a paper is published -- I suspect the National Museum is playing a  high-pressure PR game here, at the risk of upsetting the Journal of Archaeological Science.

This is a bit of a strange statement:  "“Later scientists have suggested they may have been transported naturally by rock movements during the last Ice Age."  Rock movements don't transport things.  Ice movements do -- but we'll put that down to a reporter not really knowing what Richard was talking about, and then misquoting him.  But it's good to see that the authors are adopting a neutral stance here on the mechanisms of stone transport. So we are making progress!

New research has established that stones from Wales were definitely used in the building of one of the world’s best known prehistoric sites at Stonehenge – but that they came from a hill a mile away from the place previously assumed to be their source.

A team of three geologists including Dr Richard Bevins, Keeper of Natural Sciences at the National Museum of Wales in Cardiff, have identified a hill called Carn Goedog, about three miles from Crymrch in the Preseli Hills of Pembrokeshire, as the site from which 11 stones known as spotted dolerites were somehow transported to Stonehenge in Wiltshire.

Together with his colleagues Dr Rob Ixer of University College, London and Professor Nick Pearce of Aberystwyth, Dr Bevins will next year have a peer-reviewed paper published by the prestigious Journal of Archaological Science.

He told the Western Mail: “This is an incredibly exciting project and we didn’t want to announce our findings before they had been properly evaluated in advance of publication. We got confirmation last week that they have been verified. There was a delay of six months after we submitted the research paper and you always worry there’s a possibility they will come back with something that will cast doubt on your work. Getting such positive feedback was a great relief.”

Dr Bevins, one of the world’s leading authorities on volcanic rocks, has been studying the Preseli Hills since he was a PhD student in the late 1970s. For the latest research, he and his colleagues took as their starting point a groundbreaking paper published by the academic HH Thomas in 1923 which first put forward the theory that the so-called blue stones of Stonehenge came from Pembrokeshire. Thomas expressed the view that the stones came from another Preseli hill called Carn Meini, a mile away from Carn Goedog – and ever since archaeologists have assumed that to be the case.

But Dr Bevins said: “When Thomas was doing his research, it wasn’t possible to be as precise as it is now. By x-raying dolerites from Stonehenge and comparing them with dolerites from Carn Goedog, we know with some degree of certainty that’s where the blue stones originated.

“After this, I don’t expect to be getting Christmas cards from the archaeologists who have been excavating at Carn Meini over the years!”

Dr Bevins said he would not speculate on how the stones got from Preseli to Wiltshire.

“Thomas suggested they were transported by humans south to Milford Haven, put on a boat or boats and taken by sea to a point from which they were carried to Salisbury Plain.

“Later scientists have suggested they may have been transported naturally by rock movements during the last Ice Age.

“It’s not for me to say which of the theories is correct. We are publishing our findings and it will be for specialist archaologists to use their expertise to excavate the site and see what physical evidence they can find. If humans were involved in taking the stones, there should be some evidence of human activity at the site. Equally, if they were transported during the last Ice Age, physical evidence should be present. Our job as scientists has been to present what we have found, together with the evidence to back it up.”

Further research is ongoing that could pinpoint the origin of the stones with even greater precision.
Posted by BRIAN JOHN at 11:10

Personally, I still prefer the left-of-field South American Llama Theory for transportation over human tranport any day. Those llamas still know a thing or two about shifting megaliths even though they're playing keeping a low profile.

Brian
Do you consider contacting your Geomorphology academic contacts in the Geography Department at Aberystwyth, seeing as Professor Nick Pearce
(presumably from that University's Geology Department), was involved in this study along with Bevins and someone called Ixer?

No -- not at all. The new work relates to the spotted dolerite orthostats and debris at Stonehenge. Rhosyfelin relates to the rhyolitic debitage. But there is a lesson in all of this, and it is this: one uses the term "bluestone quarry" at one's peril. It looks as if Carn Meini as a "quarry" is dead, much to the irritation of Profs Darvill and Wainwright. Prof MPP keeps on referring to Rhosyfelin as "the rhyolite monolith quarry". Hmmm -- that's what's called tempting fate.

It does imply MPP is looking in the wrong place to find a stone circle built of Prescelli stone. Common sense approach would be to look somewhere in between the provenanced source locations.

Looking forward to next September!