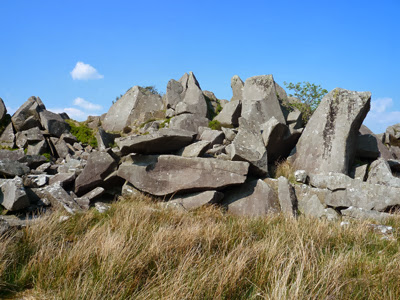 Here is another report of the new work -- still not actually published, but what's a day or two among friends? It's good to see that some balance is now entering into the bluestone debate.  We know that for archaeologists, the word "glacier" is a dirty word, never to be used in polite company.  I was beginning to think it was a dirty word among geologists too, but here we are, with Richard Bevins using it several times in the course of his interview!  Progress!

But what does make me more than a little irritated is that Richard makes no acknowledgement at all of the contribution that geomorphology makes to this debate -- indeed, from this piece one might think that there was no such thing as geomorphology.  Not only do archaeologists need to talk to geomorphologists, but geologists do as well.

And the lack of geomorphological input shows here in some of the comments made to the media by Richard.  For example:  "......geologists theorise that they were carried east on an ice-age glacier 20,000 years ago."  Geologists may theorise that, but geomorphologists most certainly do not.  Wrong glaciation, chaps.  And ON a glacier?  Wrong again -- IN a glacier, if you please.  Then we have this:  "......geologists supporting the glacier theory know exactly where to hunt for the scarring they'd expect to find on the landscape if enormous chunks of the stone had indeed been swept east on a glacier."  Do geologists really think that glaciers lift whole chunks of mountainside and leave great pits behind?  In very exceptional circumstances they might, but they should know that traces of glacial erosion are much more subtle than that.  Read the book, chaps......... or at least please check with a geomorphologist before writing your press releases,  to see if your statements make sense.

But I'm nit-picking, and must really applaud this new work.  Look forward to reading it.

Research to be published this month may bring us a step closer to understanding how bluestones from Pembrokeshire ended up at Stonehenge.
Scientists from Aberystwyth University, University College London and National Museum of Wales have located the specific outcrop, Carn Goedog, in the Preseli Mountains.
This is where the distinctive spotted dolerites originated.
The findings are to be published in the Journal of Archaeological Science.
Geologist Herbert Henry Thomas first proposed in 1923 that the rocks which form the giant inner ring were specifically quarried for Stonehenge by Neolithic man around 5,000 years ago, and were hauled to Wiltshire via land and sea.
However, other geologists theorise that they were carried east on an ice-age glacier 20,000 years ago.

While the new discovery will not answer the debate, according to Dr Richard Bevins, of the National Museum Wales, it may eliminate some of the unknown variables.
"I'm not here to come down on one side of the argument or the other," he explained.
"But our research is aimed at better informing the debate."
Dr Bevins, keeper of natural sciences, added: "Trying to match the rocks at Stonehenge to a specific outcrop is considerably more complicated than looking for a needle in a haystack but the more we can trace them back to their original source, the closer archaeologists and geologists can hunt for clues to back-up their theories.

The research has brought together archaeologists and geologists.
"Archaeologists can now search an area of hundreds of metres rather than hundreds of kilometres for evidence of Neolithic quarrying.
"While geologists supporting the glacier theory know exactly where to hunt for the scarring they'd expect to find on the landscape if enormous chunks of the stone had indeed been swept east on a glacier."
As the name suggests, the spotted dolerites have highly distinctive markings created by the elements contained within, cooling at different rates in the minutes after they were spewed out of an underwater volcano 450 million years ago.
In 2011, Dr Bevins's team located the source of another of Stonehenge's Pembrokeshire Bluestones - the rhyolites - 3km away from the spotted dolerites at Craig Rhos y Felin.
Although the relative proximity of the two discoveries offers evidence to both camps.
"Three kilometres is both closer and farther away than expected, depending on which theory you support.
"From a geologist's point of view, 3km is nothing, and the rocks which ended up close to each other in Wiltshire could easily have been carried on the same glacier.
"However, for the archaeologists a distance of 3km between the potential quarries could be seen as evidence of planning and forethought, and a suggestion that the different types of stone were chosen for some specific purpose."
Dr Bevins's team are able to say so categorically that they have discovered the source of the spotted dolerites thanks to a range of laser mass spectrometry techniques which analyse both the chemical composition of the rock and the microbiology present when it was formed.
He says that the chance of them having originated anywhere other than Carn Goedog is "statistically-speaking, infinitesimally small".
And while he is the first to admit that this discovery on its own gets us no closer to solving the riddle, he believes a definitive answer will come eventually.
"I've been studying the bluestones for over 30 years now, and I'm no closer to finding an answer which convinces me either way. But the one thing which I am increasingly sure of is that each piece of the puzzle we find brings us another step closer to the truth.
"We've located two of the sources, and there's another five or possibly six to go."
He added: "By the time we have identified those then I'm certain we'll have an answer either way. Whether that happens in my career, or even my lifetime, who knows?"
Posted by BRIAN JOHN at 10:31

What another load of old media tosh in The Times today how is it that I know that the Bluestones came from all over Preseli and not just 1 place and i am not a geologist or an archeologist but just a humble ( well perhaps not humble) vendor of mystical magical stones
and you a humble purveyor of romantic fiction also know more , oh woe and thrice woe!!!!

Twas ever thus, Colin. All the British papers have been trying to out-do one another today and yesterday -- nonsense from wall to wall. But it just goes to show that the appetite for "Stonehenge nonsense stories" is as great as ever........