This is a very interesting note from Barry -- precisely in tune with some thinking I have been doing lately.  I'll do a more detailed post on this soon.  Lake Brynberian is worth thinking about........

I also note Barry's comment about BGS taking a preferred "human transport" position in the bluestone debate, maybe based on advice from Richard Bevins.  I have always found it surprising that Richard and other eminent geologists should accept the non-evidence for human transport and ignore the considerable body of evidence pointing towards glacial transport -- but maybe these big organizations like the National Museum don't like having internal dissent, and maybe all employees have to sign up for the same position, regardless of the merits of the case.  Politics trumps science, yet again...... 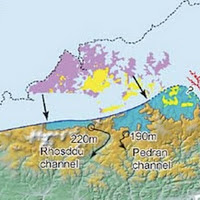 As a keen follower of S.T. I noted with interest your 3 Jan 2013 item on the stratigraphy of the Rhosyfelin dig site.  Proposing that the semi-stratified materials found there may coincide with levels 6 & 7 in the stratigraphic columns depicted, implies the presence of a till deposit lying below them, which I recall is something you have raised in earlier issues of the blog.  It would be even more pertinent if such a till was found to overlie a glaciolacustrine deposit, which is suggested by Etienne et al's schema of pro-glacial lakes, including what they term Llyn Nevern. (In line with a more consistent nomenclature this should be Llyn Nyfer).  On seeing the cross-section adjoining the notorious reclining rhyolite 'orthostat' in September, I wondered whether the lowest silty or clayey layer exposed in the trench might represent such material, actual or re-worked, which would tend to upset your view of the stratigraphy, but acknowledge that the upper surface of this layer is perhaps more undisturbed and planar than might expected if lake deposits were superceded by till or fluvioglacial material.

All I know is that I have always thought that the Brynberian depression looks like a lake basin, so have been happy to go along with Etienne's theory, which has more recently been endorsed by the BGS in their mapping of the Fishguard district.  However, the drift identified as flooring the Brynberian basin is shown by them as Irish Sea till - as a pretty extensive sheet - on what observational basis I have no idea.  Its absence at Rhosyfelin is unfortunate, and I'm not sure one can really surmise that it lies even deeper below all that rocky fill; seems unlikely to me.  Another puzzle is that the only glaciolacustrine deposits: "massive and laminated clay" which I can spot on the BGS map appear as small fragmentary occurrences around what would have been the northern upper rim of the lake (as well as a bigger area on Tregroes Moor south of Manorwen).

Another thought.  If one imagines Llyn Nevern being filled from the Llantood intake point, what would have happened at Cilgwyn?  Would it have acted like a bath being filled without a plug to stop outflow; or could there have been a plug of pre-existing glacial fill at the head of the Gwaun Valley, which for a period prevented discharge?  From poking about in your area, I could convince myself of the plug otion.  What do you think about this, I wonder?

For information I am attaching a letter commenting on the survey sent to BGS last October.  On the vexed question of their allying themselves to the bluestone human transport cause, their belated reply to me indicates that "we took advice from a number of sources, including Dr Richard Bevins of the Museum of Wales ..".  So there you have it!

Interesting comments! Don't know who Barry is, but he argues like an expert. And he is questioning some of your stratigraphy of Rhosyfelin. Just as I have.

He writes, “On seeing the cross-section adjoining the notorious reclining rhyolite 'orthostat' in September, I wondered whether the lowest silty or clayey layer exposed in the trench might represent such material, actual or re-worked, which would tend to upset your view of the stratigraphy, but acknowledge that the upper surface of this layer is perhaps more undisturbed and planar than might expected if lake deposits were superceded by till or fluvioglacial material.”

Striping away the 'excesses' in my arguments, my rock bottom view is that 1) Crag Rhosyfelin was at one time engulfed in water by a wider river, now flowing meters away; and 2) that time was not too long ago, possibly no earlier than 4000 BP. Making MPP's “human quarry” impossible.

Not being able to convince you of this does not imply this is not true!

Kostas -- Barry isn't questioning my stratigraphy at Rhosyfelin. He is observing exactly the same sequence of deposits as I am -- they are there in the photos for anybody to see. The question is this" are there any lake deposits at Rhosyfelin? If so, where are they in the sequence? watch this space...

Barry writes, “the upper surface of this layer is perhaps more undisturbed and planar than might expected if lake deposits were superceded by till or fluvioglacial material.”

Could you please explain to the general public your thoughts on this?

I don't know what Barry means by this. If he reads this, perhaps he could enlighten us?