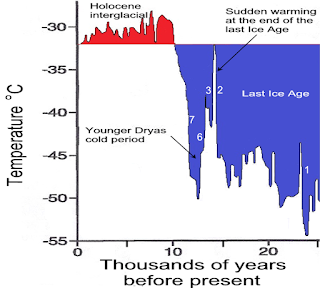 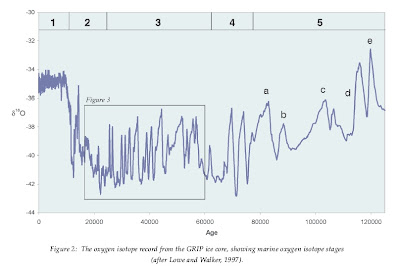 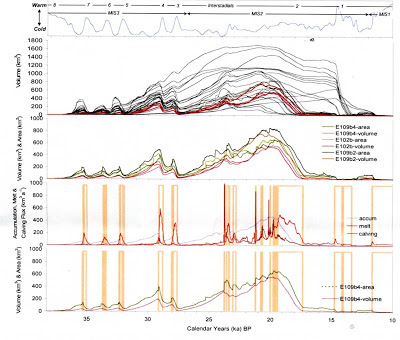 Assorted climatic graphs showing climate oscillations in the period 20,000 BP to the present -- and a lot else besides.  Note that the time sequences do not all run in the same direction!

I have been intrigued for a long time by the fact that we know very little indeed about the period 20,000 BP to 10,000 BP in the UK.  That's not quite true -- we do know a fair bit now about the period 13,000 to 10,000 BP, since there were quite violent climatic oscillations at that time, marking the REAL end of the Devensian glacial stage.  I'm convinced that the maximum extent of the Devensian ice in South and West Wales was around 20,000 years ago, and that the ice then melted back very quickly and maybe catastrophically so that it had disappeared completely by about 18,000 years ago.  During that 2,000 years or so, there would have been significant accumulations of fluvioglacial sands and gravels in many places, including -- in Pembrokeshire -- the Monington area, the Cardigan area, the Western Cleddau valley around Mathry Road, and the Mullock Bridge area near Dale.  During this period of ice wastage the climate was severe enough to maintain permafrost close to the ground surface, as evidenced by fossil frost wedges and involutions in some deposits.

There are three oscillations which geomorphologists have argued about for a long time, referred to variously as Zone 1 (Older Dryas), Zone 2 (the Allerod Interstadial) and Zone 3 (Younger Dryas).  Zones 1 and 3 were cold episodes, and Zone 2 was a warm interlude.  You can pick up most of these violent oscillations in the graphs above, based on global oxygen isotope sequences including data from Greenland and Antarctica.

The biggest debate in the UK concerns Zone 1 -- did it really affect the environment in the UK, or was its impact damped down somehow during the long period of gradual climatic warming following the retreat of the Devensian ice?  But the evidence does seem consistent in showing that Zone 2 was really rather warm, and that Zone 3 was seriously cold -- so much so that in many parts of the UK the glaciers in the uplands were regenerated for a few centuries and even created fresh moraines and other features.

If we are looking at the sedimentary / stratigraphic record in Pembrokeshire the interesting thing is that there is so little of it, given that we are looking at ten thousand years of severe periglacial conditions, but with a very gradual and erratic global warming going on.  There are few traces of these oscillations either in peat bogs, boreholes or coastal sections.  Why? We can assume that the absence of a peat bog record indicates simply that there were no peat bogs at the time -- and indeed that there were few circumstances in which organic material could rot down and accumulate.  So the landscape must have been bleak and barren, with extensive snow-patches and a very sparse tundra vegetation across which Pleistocene animals roamed -- including woolly mammoths, cave lion, deer, musk oxen, brown bears and wild boar.  There were certainly human beings living in caves as well -- as we know from Paviland, Caldey Island and elsewhere. 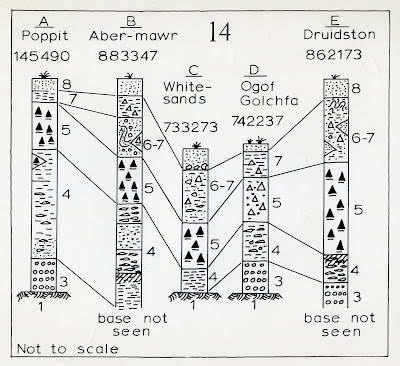 But why are there so few periglacial slope deposits in locations where we might expect considerable thicknesses?  There are a number of possible explanations.  It may be that it was very cold and arid for much of the time, with permafrost actually inhibiting slope processes and not permitting thick accumulations beneath cliff faces and on valley sides.  It may also be that (as in the case of Abermawr, above) there was no handy slope to provide frost-shattered debris capable of moving off downslope, since the old cliff-lines had already been buried during 70,000 years or so of periglacial conditions during the buildup to the glacial maximum.  At Abermawr and Poppit the Lower Head, developed during the Early and Middle Devensian, is more than 5 m thick in places, overlain by Irish Sea till from the glacial episode, and then by a mixed material (which I have called "rubble drift") made of fluvioglacial materials mixed up with frost-shattered slope deposits.  This material is rarely more than 2m thick, passing upwards into loess (in some places) and the modern soil horizon formed over the last few thousand years.

Statigraphically, my instinct is that the superficial layers on top of the rock debris at Rhosyfelin are the equivalent of layers 6 and 7 in the diagram above.  Do these layers represent a full 20,000 years of development?  My suspicion is that they do -- but we really need some radiocarbon dates and pollen analyses to point us towards the truth -- if there was ever enough organic material to be subjected to analysis. 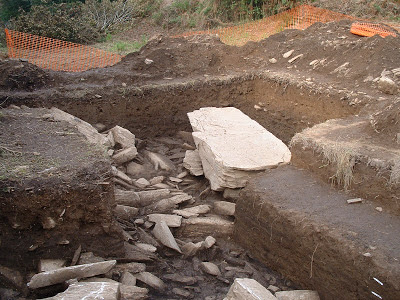 The big stone at Rhosyfelin, resting on its bed of broken bedrock fragments and enveloped by pseudo-stratified slope deposits.  The situation at the end of the 2011 dig. 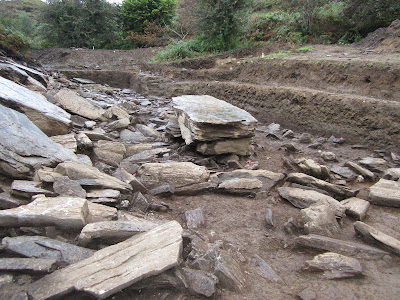 The situation at the end of the 2012 dig.  Note that the slope deposits on the right are over 2m thick in places.  There is no obvious disruption or unconformity here -- again leading to the suspicion that this is a single suite of deposits which has accumulated continuously over a long period of time.

“Statigraphically, my instinct is that the superficial layers on top of the rock debris at Rhosyfelin are the equivalent of layers 6 and 7 in the diagram above. Do these layers represent a full 20,000 years of development? My suspicion is that they do”

Looking at the excavation photos, it is hard to imagine how such dark, thick, rich soil can be due to frost-shattering of rock outcrops, forming periglacial slope deposits over 20,000 years of development.

It is simpler than that. We have here a river just meters away. And this area is undisputed flood plane. With frequent floods even today. Let alone in the past when the river was bigger and wider. So why rule out flood deposits? The angular rock fragments could be local to the Crag. Just like the scree.

Could you please identify the direction of the river flow? You can use the aerial photo you posted as reference.