The Rhyolitic "debitage" around Stonehenge 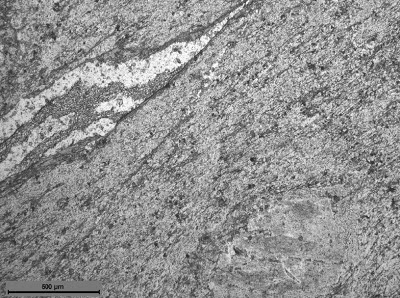 A thin section numbered SH80 -- acknowledgements to the authors of the paper cited below, and to Wilts Arch and Nat Hist magazine.  This rhyolite is very different from the Rhosyfelin ones -- so where does it come from?


There is a new paper by Ixer and Bevins, with a comment by Mike Pitts, in the latest edition of the Wilts Arch and Nat Hist magazine.   Thanks to Rob for passing it on.   It's very difficult to follow, since the authors spend most of the time  discussing very subtle differences between the 14 samples which they looked at, and deciding which category or sub-category to place them in.  The essential conclusion seems to be that the rhyolite fragments examined (which have still not been tied to any standing stones at Stonehenge) are mostly from the Rhosyfelin area -- the similarities with the samples taken from the crag are close enough for "micro-provenancing" in just one case, but in the others the authors have to admit to provenancing from the general area.  They do not speculate as to how wide this area might be -- so it could be covered by a grid 500m x 500m in extent, or it could be even larger.

One general problem that I have with the paper is that it tends to talk of the "Stonehenge rhyolitic debitage" as if it is homogenous or as if they have examined enough of it to be sure that any conclusions drawn are incontrovertible.  This is the problem that all scientists face -- when we have a sample of limited size, how wide are the conclusions we can draw?  It's not a bad idea to bear in mind that the parts of the Stonehenge "stone floor" or regolith or debris layer examined and sampled thus far is very small -- and as I have said before, there may be several "debitage" groups with quite different petrographic characteristics on other parts of the Stonehenge site or in other parts of the Stonehenge landscape.

I wasn't entirely convinced by the attempt to push samples from SH 80 into the Rhosyfelin assemblage, and would like to know what the characteristics of rhyolites from other outcrops in the region might look like, and how they might compare with the samples examined.

Mike Pitts says:  "It is notable that all the samples matched in this study to Craig Rhos-y-felin come from debitage and not from megaliths (although Ixer and Bevins (201111a and b) have suggested that buried megalith SH32e may also come from Craig Rhos-y-felin). One of the distinctive features of the rhyolitic rocks is that they are flinty – they have a good conchoidal fracture. That makes them relatively easy to break up, if they are standing as monoliths at Stonehenge. But it also makes them suitable for making portable artefacts. There are flaked bluestone ‘tools’ from Stonehenge (including some from the stone floor). Which of these are made from debris created when stones were dressed on site? Which are made from broken up megaliths? And which were made in Wales and brought to Stonehenge by people visiting, perhaps on a pilgrimage of some kind? Clearly the distinction has important implications for how we understand Stonehenge."  Mike is seeking to open up the debate here and to avoid sticking to the standard story, but he is still seeing the world through the same tunnel as all the other archaeologists.  He fails to recognize that there is a further possibility, and he should also have asked this question:  "Which flaked bluestone tools -- and indeed which bits of debris -- might have come from smaller rhyolite stones found in the neighbourhood and which might be assumed to be small glacial erratics?"  I am referring here to stones which might have been too small to use as orthostats, or which might just have been the wrong shape, or which might have been too badly damaged during glacial transport and subsequent frost shattering.

"A re-examination of rhyolitic bluestone ‘debitage’ from the Heelstone and other areas within the Stonehenge Landscape"
by Rob A. Ixer and Richard E. Bevins, with a contribution from Mike Pitts

ABSTRACT
Recently it has been proposed that the Stonehenge rhyolitic debitage can be distributed into five petrographical groups (A-E) (and that at least three of them (A-C) are from rocks cropping out at Craig Rhos-y-felin). This supersedes an earlier classification scheme of this important category of Stonehenge material. The earlier 1980s scheme, based on lithics found close to the Heelstone, divided the rhyolites into two groups (A and B) and sub-divided the larger into two further sub-groups (Bi and Bii). Re-examination of this earlier material together with other Stonehenge rhyolites has allowed the two schemes to be compared and integrated.
The original 1980s Group A lithics are identical to the present Group B, (both are small groups). This group is described in detail so completing the petrographical descriptions of the Stonehenge rhyolitic debitage. Despite bearing feldspar megacrysts this group shares sufficient petrographical characteristics with rocks from Craig Rhos-y-felin to support the view that that location is the geographical origin of the group.
Lithics belonging to the 1980’s groups Bi and Bii, however, are randomly distributed amongst the present A and C groups and there are no strict correspondences. The designation Bi and Bii should therefore be abandoned.
Using the new scheme it should now be possible to map more precisely the distribution of the rhyolitic debitage in the Stonehenge landscape to inform such questions as to the number of rhyolite orthostats originally present and their fate.

I appreciate Mike's suggestion about portable tools and made a similar remark on this blog many months ago. However, since then, I took a closer look at the rhyolites around Rhos-y-felin and wondered how long the journey might have been and which stones I might reasonably expect to find along my way and especially at my destination.

I would like to see Mike's reasoning but my impression is that I would not be short of superior material for casual toolmaking on my long walk.

Of course this discounts the factors of familiarity with working certain types of stone or emotional attachments, but from a purely practical viewpoint there is little need to carry stone from Pembrokeshire to Wiltshire in order to make day-to-day tools. And, had this been done, we might reasonably expect to find some English flint in Prescelly, of which I am not aware.

Brian, quoting from the abstract,

“...the distribution of the rhyolitic debitage in the Stonehenge landscape to inform such questions as to the number of rhyolite orthostats originally present and their fate.”

Back to pulverizing standing rhyolite bluestones or carrying bucketfuls of rhyolites from Wales in order to explain the non-existence of rhyolite orthostats!

So very disappointing. Geology is getting swallowed by archeology once again producing more feces!

I agree with you on this one, Kostas. Of course, it may be that the geologists are publishing in an archaeological journal (rather than a geological journal) because they know that their key readers are archaeologists -- so they have to bring in a few comments which pander to the wishes of their readers!

The piece you quote is typical of the manner in which the arguments have been distorted.

The 'market place' of ideas should not be incompatible with 'intellectual integrity'.

Finding excuses for such behavior only encourages the myth making. Would Newton's generation be so inclined?

Some useful points.
Some clarification first.
The Ixer and Bevins' papers are mainly based on the Victorian art of petrography. I doubt that a strictly transmitted light petrographical paper has been published in a geological magazine for many decades. It is unfashionable and largely dismissed- the technique is poorly taught these days and has been marginalised. That is why the papers (on archaelogical material) are published in archaeological magazines.
Group E of the most recent Ixer and Bevins' classification can be related to an orthostat namely SH48
so some debitage (found in 3 or four different places in the SH landscape) can be shown to be 'from' an orthostat.
Yes 32d or e may be the source of the rhyolites groups A to C.
I agree SH80 is different from most material from Craig Rhos-y-felin but others of the same group (Group A I think) have just enough of the key characteristics to plausibly suggest that they come from a so far un-sampled part of Rhos.
Your point about the potentially heterogeneous nature of the debitage has not so far been borne out. (Many hundreds of rhyolites have been macroscopically classified) The sampled debitage from through out the SH landscape is surprisingly the same (except for the very small number of samples from the test pits and Greater Cursus area).
This is after all work in progress and a careful reading of the papers in sequence will show the continual refinement of the identifications and their significance.
In an ideal world I agree 2/3 hundred thin sections would be lovely.
M.

Myris you write,
“Your[Brian] point about the potentially heterogeneous nature of the debitage has not so far been borne out.”

So the Stonehenge debitage is homogeneous? How does that comport with these fragments being chippings from orthostat dressing or tool making? We would expect the debitage from such activities to be heterogeneous and 'in place' to where that activity occurred.

The 'homogeneity' of the Stonehenge debitage can only be explained by natural agency.

Whoops SH80 is Group B not A

Welcome back to this Blog, Myris, and a Happy New Year to you and yours! Have you been away, tapping you feet at Glasgow's Celtic Connections, or tapping your hammer elsewhere??

Just taken a short rest. I have a kindle fire now and play games.
Still peering down the microscopes.
M