This stone complex is well described by NP Figgis in his book.  Today I braved a gale to take these pictures!  There are five standing stones here, within a few hundred metres of each other.  There doesn't seem to be any rhyme or reason for the positioning of the stones -- there is no "arrangement" as far as we can see.  MPP and his colleagues will be delighted to know that all of the stones are made of dolerite picked up in the immediate vicinity.  The landscape hereabouts is littered with dolerite boulders -- they seem to have simply picked up the most elongated of them for use as standing stones.

There is no link of any sort with the rhyolite outcrop at Pont Saeson, which MPP seems to think is a "quarry." 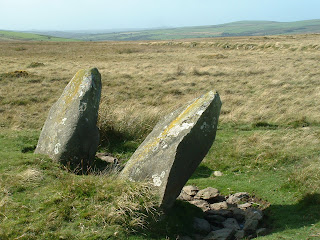 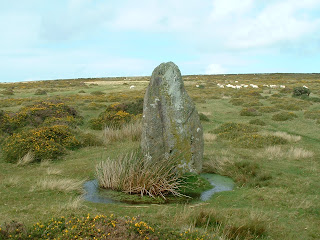 The single standing stone, all on its own and to the right of the track. 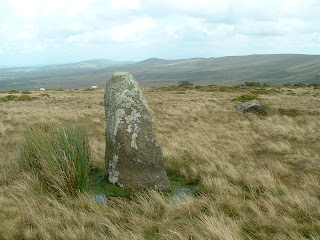 This is the middle stone of three.  The other two are recumbent.  The stones are ofter referred to as the Waun Mawn stones.  the stones are not aligned, nor are they on the circumference of a circle.  I agree with Figgis that there is no reason here to talk about any planned stone setting -- the people who put this stone up probably did it because (like the other two) it was here, in a very convenient position, on a gently sloping shelf of land.  Maybe the other two stones were too heavy to lever up into a standing position? 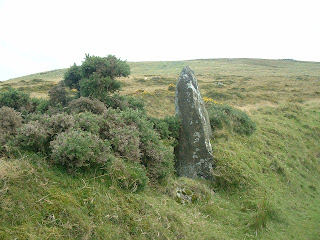 The roadside stone -- just up the hill to the south of the cattle grid, on the left side of the road, and built into an embankment.  I'm inclined to think it is indeed a stone erected through human effort -- but some think it is in a "natural" position.
Posted by BRIAN JOHN at 21:58

Regarding
"There doesn't seem to be any rhyme or reason for the positioning of the stones -- there is no "arrangement" as far as we can see."

Could it be possible that the people who put these in an upright position, did it so they could easily find them at a later time- it would be easier to return and find an erect stone as opposed to one that is lying flat on the ground?

Anon, why on earth would they want to do that? That seems to me to be inherently unlikely. The stones may have been memorial stones or -- I say this ever so softly -- cattle scratching posts. They don't appear to be associated with burial sites, and this group wouldn't make sense as boundary markers either. All we can say with certainty is that they were erected in pretty well the places where they were found.

Phallic symbols, erected in a state of hubris (excessive pride OR self-confidence) by one Hugh, who lived locally?

That sounds a reasonable theory. Hugh Pugh was indeed reputed to have lived just down the road -- but was he IMPORTANT enough or indeed virile enough to keep these stones all standing at the same time? Some of them are leaning rather badly, and some are so droopy that they hardly deserve to be called standing stones at all. Two of them are lying or recumbent stones, and that opens up all sorts of possible interpretations...

I enjoyed the humor! On a more serious note, however, how are these (and all other standing stones) maintained erect for five millennium or more? Surely just digging a pit and back filling this with gravel (any abundant gravel to be found in the landscape?) and packed stones around the base cannot support big heavy stones (some even out of balance) for few millennium!

For one thing, the foundation will absorb water and surely will freeze during winters and periglacial conditions. Thus resulting in foundation cracks and weathering to the point of the erect stone shifting and eventually falling.

If these standing stones had any chance, the foundation had to be tightly sealed and with some water runoff grading so that water would not sip into the foundation pit.

My question: What kind of building technology and cement was used to secure these stones erect?

And if such technical knowledge was known to Neolithic people, where else was it put to practical use in their struggle to survive?

I don't see any problem at all, Kostas. As long as a pit is deep enough and well enough packed with stones and other debris, even huge stones like the menhirs of Brittany can remain in position and be remarkably stable. After all, if the stone is vertical and the centre of gravity is above the pit, there is no great reason for it to fall over. No cement -- just a deep pit, careful placing and careful packing.

I'm assuming that in the 3rd pic down that the slightly pointed hill on the horizon to the right of the stone is Foeldrygarn ,in which case the equinox sun would set over that point as seen from the stone . No claim for intentionality merely pointing it out .

Geo -- yes, it is Foeldrygarn. But that's where the sun is coming up, not going down!