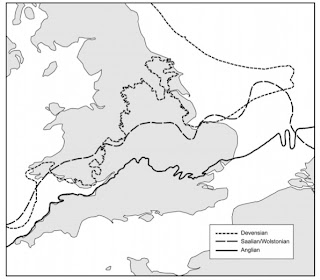 My thanks to Lionel Jackson for bringing this to my attention.  In a chapter on Pleistocene Glacial Limits in Great Britain, Phil Gibbard and Chris Clark assemble as much information as possible from published sources to suggest where the glacial limits of the last three British glaciations might be drawn.  The map is somewhat crude and generalised, and in detail it is demonstrably wrong.  For example, the glacial limit of the Devensian in Pembrokeshire is demonstrably incorrect, since Devensian till is found at a number of locations (including Caldey Island) well outside the line as they have drawn it.  Also, the Anglian limit is wrong in Somerset, since glacial deposits are found at least as far to the east as Bathampton, to the east of Bath.

However, this does represent progress, and it will be nice if somebody could bring this map (and the quote below) to the attention of Professors GW, TD and MPP, since they seem to be quite determined to pay no attention at all to anything I might say!


"............At the same time, this (Anglian) glaciation extended across the Bristol Channel as far as the northern coast of the English South-West Peninsula (Bowen et al., 19 8 6 ), although there is some dispute over precisely how far it reached. There seems to be doubt whether it reached Cornwall or the Scilly Isles, where deposits previously thought to be Anglian are now assigned to the Devensian (Campbell et al., 19 9 9 ). If the ice did indeed cross the Bristol Channel during this phase, it would have blocked the River Severn drainage potentially causing a proglacial lake to form in the valley."

As you know i'm no geologist, but surely you can calculate from the known sea levels at the end of the last ice age the extent of the ice cap?

You show these graphs showing that the sea was 65m lower than today - a Google of the Antarctic shows that it contains 30 million Cubic Km of ice and if it melted it would raise sea levels by 61.1m.

Well I think you looking for an ice sheet as big as the Antarctic added to the current ice maps?

So it looks on the back of an envelope that the ice sheet was a hell of a lot bigger than current estimations?

Love to spend more time on the model... but writing next book!

That's exactly what earth scientists do -- work out the relationships between glacier ice present in the big ice sheet areas (Cordilleran, Laurentide, Scandinavian, British and Irish -- and a lot more besides) and the actual position of sea-level on the continental margins. This is all evidence-based, and pretty consistent, and anomalies coming from unstable coastlines (for example) are generally explained and eliminated. Isostatic effects, as I have explained, are also taken into account, but they do complicate the picture enormously in those areas affected by ice. This is the sort of work I did when I was on those expeditions to Iceland, Greenland and the Antarctic. Happy days!