The archaeo-astronomy of Waun Mawn 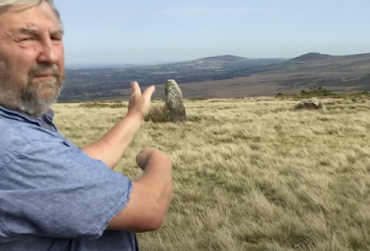 Don't you just love it when Prof MPP and Clive Ruggles desperately look for something and fail to find it?  This is from a report on the Waun Mawn research in "Archaeology" magazine, published a few months ago.

Parker Pearson suggests that two of Waun Mawn’s largest stones formed an entryway that would have framed the sunrise during the weeks before and after the summer solstice. This important event was also marked at Stonehenge.
Archaeoastronomer Clive Ruggles of the University of Leicester points out that the stones at Waun Mawn may have also been aligned with celestial objects other than the sun or even with points on the landscape. Those relationships, however, are difficult to detect because the land and the position of stars in the sky have both changed over the millennia. Ruggles suggests that the stones marking the solstice at both Waun Mawn and Stonehenge probably indicated roughly when specific ceremonies were supposed to take place, but acknowledges that the belief systems of the stone circle builders have been lost to time. Says Ruggles, “There’s astronomy in there, but it’s part of a much more complex cosmology.”
What this actually means is this:  "We have desperately tried to find some astronomical alignments at Waun Mawn, but have actually found bugger all............"
Posted by BRIAN JOHN at 23:53

It's probably lined up with the rising of the distant planet called Zod, which is not visible to the human eye, but which was very sacred anyway, in these parts, back in the good old days.......