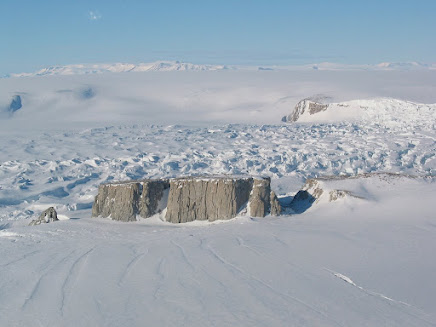 Starr Nunatak, Victoria Land, Antarctica.  This nunatak has been left "high and dry" as glacier ice has wrapped itself around its flanks, escaping in order to infill all the available low points in the landscape. 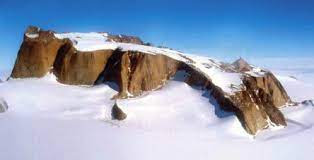 Mount Rea, Antarctica -- another nunatak ("lonely mountain" in the Inuit language).  The plateau on the nunatak is not extensive enough to have developed its own ice cap.
You saw it here first.  The term "glacial wrapping" does not appear in any textbook, and has never been used before, so far as I can ascertain -- but it's an important concept in glaciology.  It refers to the tendency of glacier ice to "wrap" itself around high obstacles rather than seeking to climb over them.  This is because glacier ice is essentially rather lazy, and will always take the route of least resistance.  It will always fill depressions and valleys before seeking to overwhelm ridges, interfluves and peaks;  that's because it FLOWS like a fluid medium, and it does not matter at all whether the ice is cold-based (polar) or warm-based (temperate).  It's only when lowlands are filled to overflowing that an ice surface may build up and overwhelm the highest points in the landscape.  In other words, if the ice cannot escape it will thicken until it can find another way of escaping.  But all glacial episodes are time-limited, and ice buildup that may have continued inexorably over tens of thousands of years may suddenly come to an end, with catastrophic ice wastage and surface lowering occurring so rapidly that it can be measured in centuries rather than millennia.  That's what appears to have happened at the end of the Late Devensian glaciation in the western British Isles.

And the result of glacial wrapping?  Nunataks and ice-free enclaves, in every glaciated territory.  Sometimes, plateaux may remain detached from ice-sheet glaciation, with the biggest outlet glaciers flowing around them in deep troughs, but if climatic conditions are cold and snowy enough for the biggest glaciers to be nourished and "kept alive", almost inevitably the plateaux will have ice caps of their own.  We can see this on a grand scale in East Greenland today, with abundant small ice caps ranged around the edges of the Greenland ice sheet.

In glaciated landscapes where we see a mixture of major drainage routes (used by outlet glaciers) and smaller troughs used by glaciers draining from plateau ice caps, the most likely places for nunataks or unglaciated enclaves are the tips of the interfluves, where confluent troughs come together.  I read an interesting article about this today, in a symposium on nunataks. 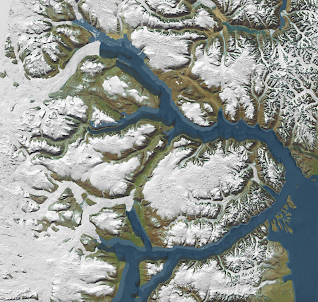 East Greenland fjord country, with the ice sheet at the western edge of the image.  The fjords and other main ice sheet drainage routes are well shown -- but note the multitude of detached plateau ice caps which were (until very recently) perfectly "healthy"..... 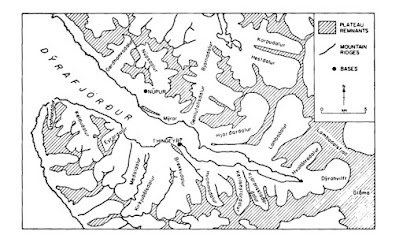 The Dyrafjordur area, NW Iceland, showing the plateau remnants after a long history of intensive glaciation along big outlet glacier routes and along shorter troughs used mostly by ice flowing from independent plateau ice caps.  After episodes of intensive glaciation the tips of the spurs are the first things to come out of the ice.

I have done a lot of posts already on nunataks and ice-free enclaves, and will not repeat them here.  But the main point I want to make is this -- there are still many professional glacial geomorphologists to draw their hypothesised ice limits as straight lines, or taking no account at all of local topography.  I have been on about this for years, criticising (for example) ice edges drawn across mid Wales regardless of the positions of mountain ridges and plateaux, and ice edges drawn in the Celtic Sea in positions that would have broken all the rules of physics.  The rules relating to glacial wrapping are just as relevant in open areas (such as the floor of the Celtic Sea) as they are in glaciated uplands where there may be high peaks and glaciated troughs. 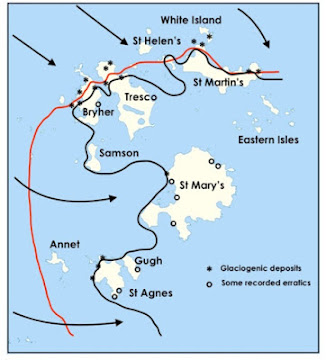 Devensian ice limits on the Isles of Scilly.  Red line after Scourse and others.  The black line is mine -- based on glaciological principles and field observations.  I now think that the archipelago might have been a nunatak, completely surrounded by ice -- shown below. 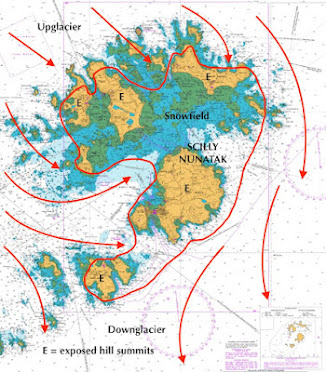 Readers of this blog may remember the spat I had with Prof James Scourse over the glaciation and ice edge positions in the Isles of Scilly.  When I published my short paper on the glaciations of the islands, I provided evidence that Devensian ice had affected the west-facing coasts, as one would expect from glacier ice behaving normally.  In published correspondence, he accused me, in rather intemperate language, of being incompetent -- but then he had to agree that I was right and he was wrong.  Essentially, I was taking account of glacial wrapping, and he was not.

With regard to ice edge positions in and around Pembrokeshire, I have for years argued that ice edge positions cannot possibly have remained far off the western coast of the county if there was an ice edge pressing against the north face of Mynydd Preseli more than 350m above present sea level.  Again, this was all about glacial wrapping.  And at last, without any proper acknowledgement of my posts on this blog, the BRITICE team have acknowledged that I was right and they were wrong -- by showing on their latest maps that Devensian ice affected the coasts of south Pembrokeshire at least as far east as Caldey Island.  As I have been trying to tell them for years, that's what the observations on the ground show, and that's what glaciological theory must have predicted. 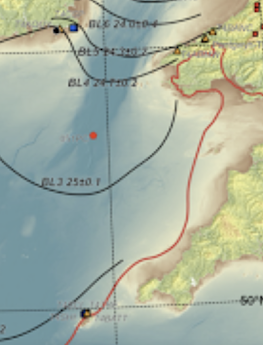 PS.  By the way, glacial wrapping has nothing whatsoever to do with this latest trend for the inhabitants of high glacierised mountains (as in the Alps and parts of China) to cover snow-covered surfaces with vast swathes of special fabric in a forlorn attempt to reduce the rate of ablation and glacier wastage.  I can understand why they are doing it, especially in areas where the skiing holiday industry is under threat -- but it is all really rather stupid.  There is no technical fix for global warming -- people should stop these stunts (costing millions of pounds) and listen to what they are being told by the climate scientists and by Greta Thunberg and the younger generation.

Has it been posited that there are nunataks on Dartmoor?; and also Exmoor?

There has been a lot of discussion about the tors -- some appear to be eroded by moving ice, while others were protected by sluggish or stagnant thin ice. Some of the tors must have been nunataks for part of the time, but the evidence is likely to be subtle.

I did see on Al Jazeera, a report about an engineer in Nepal(?) who was building piles of branches and then spraying water from melted glaciers as a sprinkle that froze overnight and became progressively thicker. His view was that it contained more water in a vertical column than a thinner ice sheet.
The pile progressively melted in the summer, releasing water in a more controlled flow than the natural thaw and flood in spring and early summer with no water for the rest of the year.
He said that human occupation in these areas was only possible because of the release of water from the ice, when the glaciers are gone, people would have to leave. This technique, if adopted would only delay this for an additional 50 years or so.