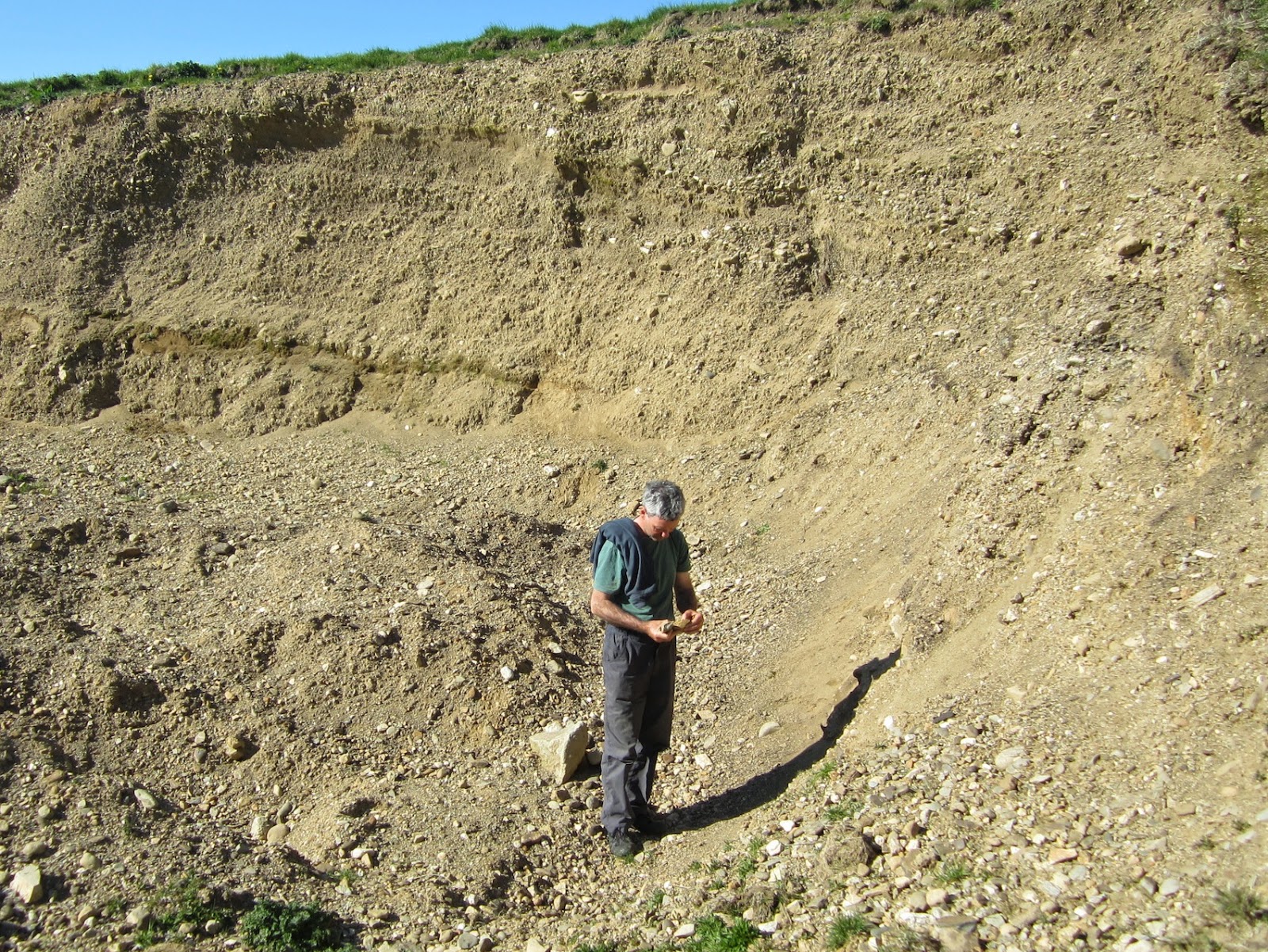 Prof Danny McCarroll examining one of the erratics in the Llangolman gravel pit, adjacent to St Colman's Church

It was good to take another look at this site today, in the company of farmer Huw Absalom and Prof Danny McCarroll and his wife Louise.   It was almost too hot!  And the faces of the gravel pit were so dry that it was quite difficult to pick out the stratigraphy.

But in our discussions Danny agreed that we were probably looking at Anglian fluvio-glacial materials, maybe 450,000 years old.  He agreed with me that the degree of staining by manganese and iron oxide is indicative of great age, as is the extent of pebble "rotting" which is far greater than in the Devensian gravels seen in other pits in the Cardigan - Moylgrove area.

We examined the fossil frost cracks in the upper gravel horizons, which suggested the presence of permafrost during and maybe after a long period of gravel deposition.  Another thing Danny noticed is that one of these frost cracks seems to have a sand layer running across its top edge -- suggesting that this sand layer might have been deposited in a subaerial environment following an episode of ground freezing -- making it a suitable candidate for OSL dating. That's something we need to work on.

On my previous visit I thought that the gravel spread in the vicinity of St Colman's Church was a remnant of a previously much more extensive cover.  But  now I think I agree with Danny that this is probably a mound of fluvio-glacial material which we might call a kame.  It has been eroded away in some places by spring sapping, but it is clearly in a hilltop position, and it is probable that it owes its origin to an accumulation of meltwater debris carried into an open pit in a dead-ice environment.
Posted by BRIAN JOHN at 21:01

I hesitate asking you this. But it's been in my mind for awhile now! So I will!

What distinguishes Anglian gravel from Devensian? Is it "stratigraphy" or is it "lithology"?

If Anglian gravel get redeposited by Devensian glaciers and meltwater, is it still "Anglian"? Or Devensian!

Fluvio-glacial gravels will always have the same sedimentary characteristics, related to load available, stream flow dynamics, gradient, particle sizes etc. The key thing we find at Llangolman is the degree of rotting of the included stones -- quite unlike that of the gravel pits near Cardigan. If an old fluvio-glacial deposit, from the Anglian, was to be redistributed following a new ice advance, the coherent stones might well survive to fight again another day, but the rotten stones would very quickly be destroyed during transport. I would guess that many would be destroyed pretty well instantly. Then we would have a Devensian deposit consisting of fresh-looking stones of many different ages and origins....

So it's the "rotten stones" that give the age away. Can stones rot "young"? Under various degrading environments?

"the coherent stones might well survive to fight again another day, but the rotten stones would very quickly be destroyed".

Too wise for words!