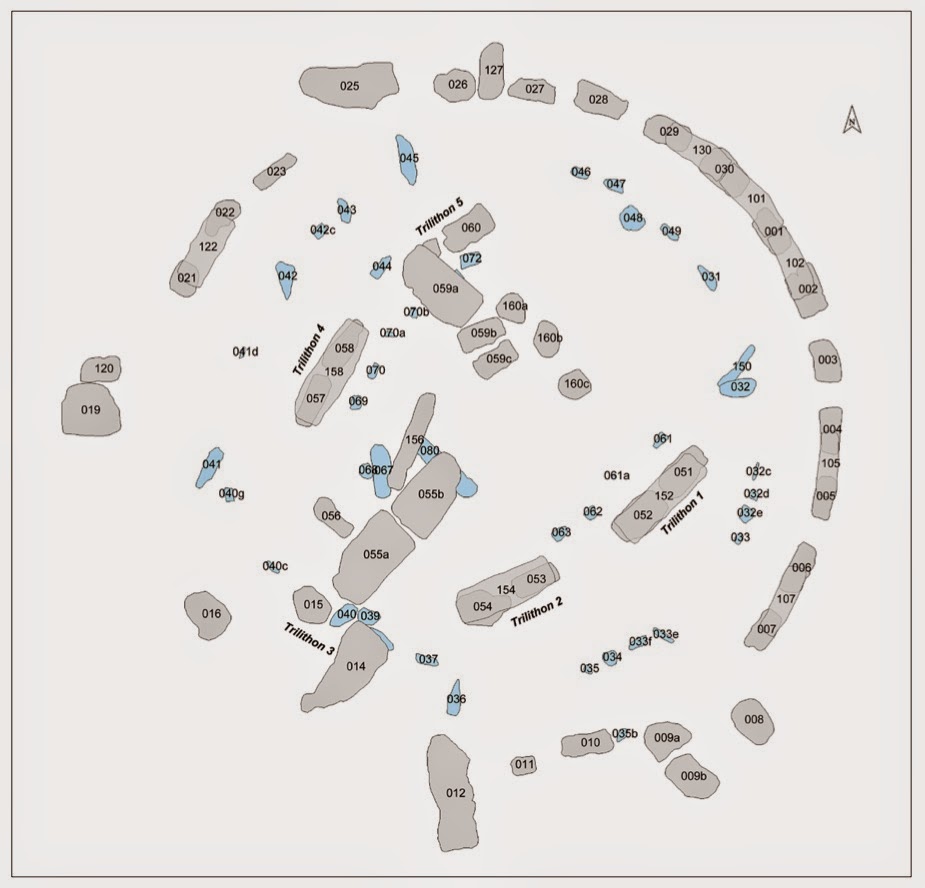 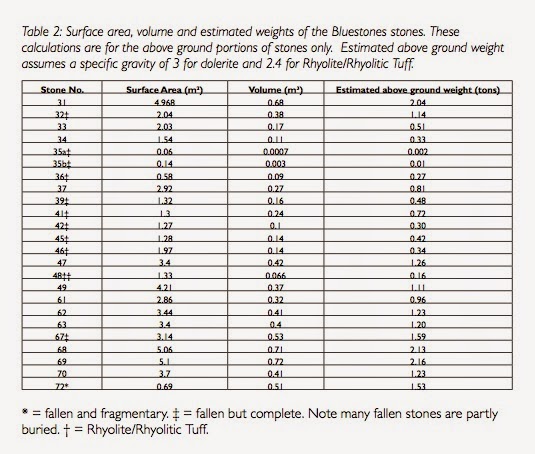 Above are two of the illustrations from the EH report relating to the laser scanning project (2012).

The table of areas, volumes and weights is really rather strange.  Knowing "above ground" volumes and weights is of no use to anybody -- why didn't they give us maximum length x max width x max depth so as to give us an idea what these stones actually look like? The Altar Stone is not on the list, and neither is stone 38.  Neither are the stumps 32c.d and e.  But as far as the standing stones are concerned, we do at least get some idea of which ones are large and which ones are small..... and the slabs obviously have smaller surface areas and therefore smaller volumes and weights.

why didn't they give us maximum length x max width x max depth so as to give us an idea what these stones actually look like?

Scanned volumes are easy to determine as a part of the scanning process so tell you something newish about the monument. Perhaps the team was not aware of the methods one could use to determine below ground volume or had no brief to consider it? Given the relative costs of low strain dynamic technologies, it was probably considered. Having said that, special caps might have been required so perhaps it is understandable that it was not done.

The table is only marginally useful for the 13 bluestone standers as seen above ground - useless for the others.

Case in point: BS-36. A pretty hefty rock in total, but it only shows a sliver on the surface.

I recently saw a similar table for the Sarsens and it's the same story.

Yes, the sarsen table is in the same publication. Equally useless.

Even if they did not know the full depth of the "buried" sections of stones, they could have made a reasonable guess. Generally about a quarter under surface and three-quarters above?

Brian: yes, in a perfect world we'd use something like 1/4 x 3/4. (Perhaps more, depending on active or passive purpose.)

But at Stonehenge they were constrained by the limits of available raw material, so we see stones like S-55 only planted about 4-feet. There are several other examples.

With regard to the tables as published, why didn't they use available information? A large percentage of the stones have been excavated and their actual lengths are recorded.
No need to estimate these.

Even adding what is likely underground, am I correct in thinking most of the Bluestones/Rhyolites are between 1.5 and 1.8 metric tonnes ?