Back to Garn Turne 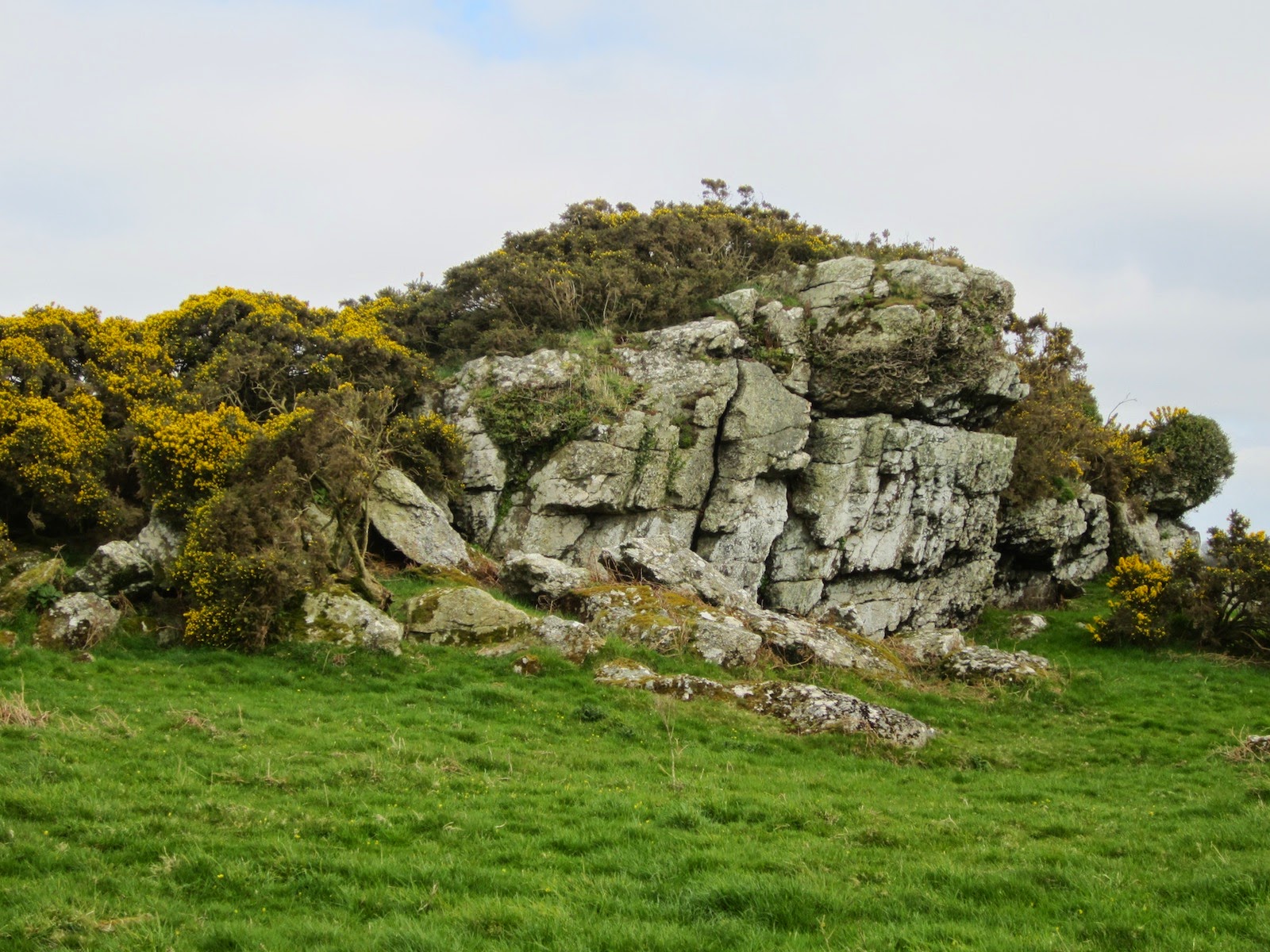 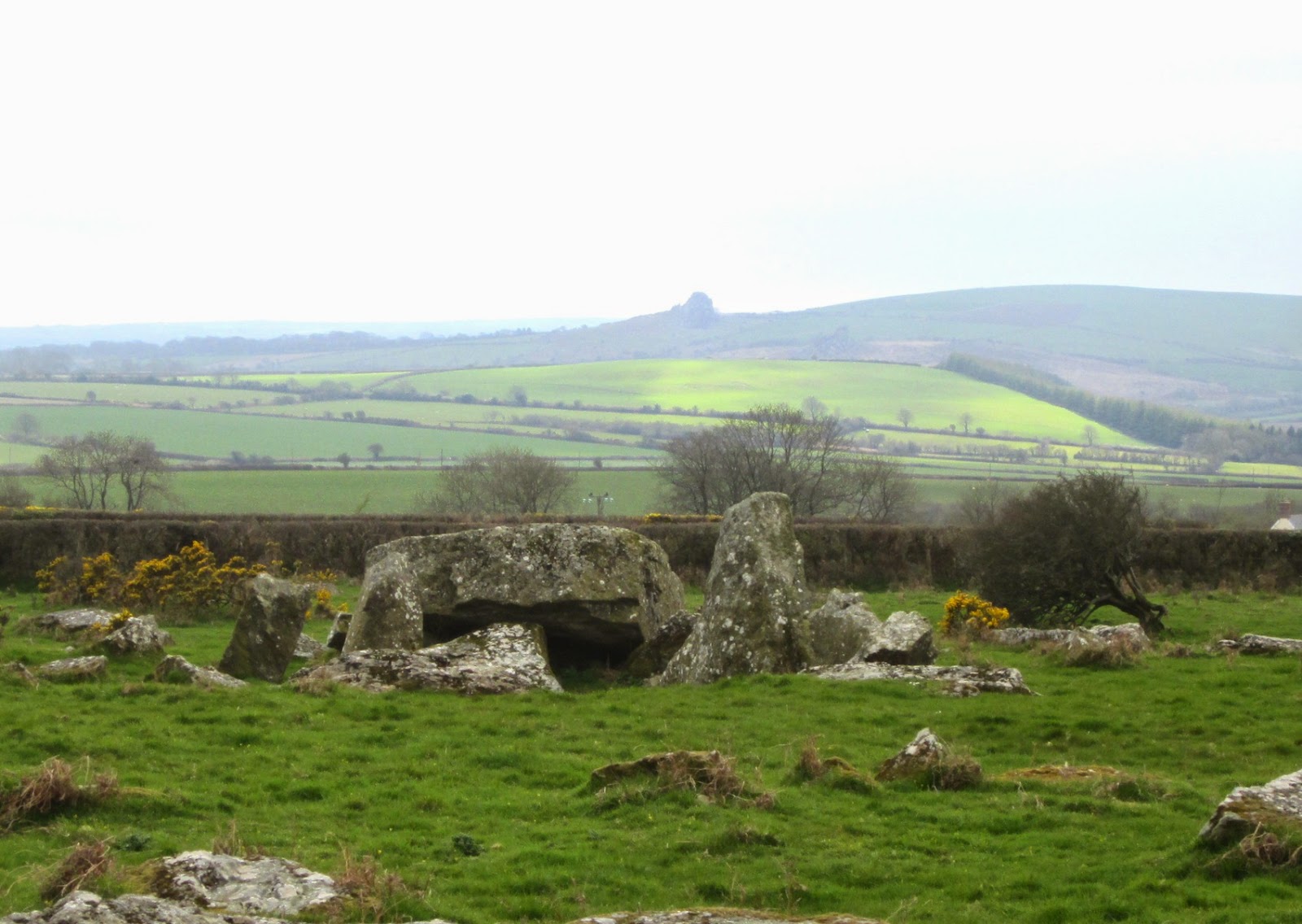 Above: one of the natural rock outcrops of Garn Turne, about 50m from the earthfast dolmen.  Below:  View directly towards the SW, with Lion Rock (Poll Carn) in the distance, beyond Trefgarn Gorge.  The "entrance" to the burial chamber faces the camera -- away from the impressive view across the landscape.  The builders of the tomb probably did not move this gigantic stone at all -- it was used exactly as it was found.

Been to have a look at Garn Turne today.  It's about 2 km from Wolfscastle and just over 1 km from Sealyham Bridge, in the middle part of Pembrokeshire.  There is some doubt about whether the Devensian ice reached this far, but the current feeling is that the ice limit lay a little distance to the west, near Wolfscastle and the northern edge of the Trefgarn Gorge.

The site is a very beautiful one -- with a small series of crags in a rough paddock which is surrounded by green cultivated fields.  The outcrop -- or series of outcrops -- called Garn Turne is made of the volcanic rocks of the Sealyham Volcanic Formation, intruded into or resting above dark grey silty shales and mudstones of Arenig (Ordovician) age.  The rocks are older than the Fishguard Volcanic Formation -- green-grey in colour and with a rough knobbly surface texture.  The rocks are classified as andesite and dacite lava and hyaloclastite, with some interbedded tuffaceous mudstones.

The crags consist of a series of vast detached and tumbledown blocks resting on bedrock outcrops with small cliff faces.  Right across the paddock there are hundreds of other boulders and detached blocks, many of which are in approximately their "original" positions and others which have been moved downslope by slope processes over hundreds of thousands of years and possibly by Anglian ice action as well.

The famous earthfast dolmen excavated by Colin Richards and others a couple of years ago is just a huge slab of bedrock weighing more than 60 tonnes with other stones moved into position around it.  Colin thought originally that the big "capstone" (if that is the right word) was quarried from the rock outcrops 50 - 100m upslope and moved to its lower position by the cromlech builders; but he seems now to have abandoned that idea.  I agree that it was used where it was found, with a burial "chamber" simply excavated beneath it.  The forecourt faces NE -- for the simple reason that that was the natural direction in which the stone "faced" when it was embedded in the ground.

The smaller stones do not appear to have been shaped at all by the men who placed them into position-- they have sub-rounded edges but rough and irregular outlines.  Some of them have probably been moved a short distance by ice -- so they have again been used more or less where found.
Posted by BRIAN JOHN at 21:14

I think capstone is fair as it was almost certainly intended to be like other portal tombs , Barker (1992) suggested that what was going to be the capstone was never actually raised .
The direction that the portal faces seems to be nuanced than simply one of the directions the capstone is facing , as 45 % of the portals face east .
They tend to be a lowland species too 80% are found between 50 - 150m .
No burials have been found , but absence of evidence etc , however a lot of portal tombs have no evidence of burials so it is fair to say that it may not have been a function and probably not a primary function .
The pit where the capstone was dug from had had a sizeable fire and looks like it was more like the Cuckoo stone i.e. moved and left adjacent to it’s socket and unlike the capstone at Pentre Ifan which was possibly raised directly above the pit .

Geo -- the report of the excavations in 2012 -- written with commendable speed by Vicky Cummings and Colin Richards, and published in Nov 2012 -- refers over and again to this as the site of a "collapsed dolmen." They say the stone was brought from upslope and was intended to be raised, but never was. They seem to have changed their mind on that. The stone referred to as "The Floss Stone" is the intended capstone and is not particularly large. It's embedded in the ground in the "forecourt" and is not very prominent. The monster stone -- weighing 60 tonnes or more -- is the one that attracts the eye, but the excavators seem to agree that this one lies in its natural position, embedded in till and slope deposits. Rather a confusing site, since different commentators in the past have been looking at different stones as the foci of attention....

Vicky and Colin do say that they have evidence of the shaping of the Floss Stone -- in the form of flakes found in the pit soil. They claim that this is one of the earliest instances in Britain of deliberate stone shaping.

Brian ,
Referring to the monster stone (51) p 16 they do say “At some time after the collapse of Garn Turne Minor a decision was made to quarry and erect this stone as the capstone of another dolmen “ .It was the quarrying of this stone that created the pit (007) .

Geo -- don't believe a word of it. I don't think they have provided any evidence that the monster stone was moved at all -- the fact that there is a pit (071) does mot mean that this is where the stone originally lay! I think they just excavated under the monster stone until they had a tidy little chamber underneath, and then maybe lined the edges of this little cavern with some smaller stones.

Well that is your opinion Brian, as ever having a knock at the archaeologists, consistent in that regard at least. There was clear evidence for fire setting and flaking the bedrock under the Floss Stone, which we concluded had not been moved and may have been intended to be a capstone at some point. There was also clear evidence for a pit in front of where the capstone now lies. At the base of this pit, from which neolithic pottery was recovered, were clear grooves big enough to be where a person had tunneled under,giving weight to the interpretation that this is where the capstone had lain prior to being prised out - a feature found at Carreg Samson and other dolmens. There are also stones under the capstone that are consistent with the interpretation that these were intended to be the props for the dolmen, and so on.

Brain ,
The confusion is that there are three capstones .Stone (51)which was the capstone of "Garn Turne Major " ,the last monument . This was "shaped ".
The two other capstones were Garn Turne Minor (048) and the Floss Stone (52),both were quarried and moved
They suggested that (51) had been moved by glacial action and provided no evidence to support that .The pit (007) was a result of moving the top soil and glacial till from around (51).

Dear anonymous archaeologist -- as you might have noticed, I give quite a few knocks to geologists and geomorphologists too. iI have nothing against archaeologists in general -- some of them I greatly respect! Grooves in the base of the pit? Those hollows (102 and 107) could equally well have been intended as sockets for stones which may or may not have been used. Alternatively they may have been dug as part of a plan to take away much more material -- which was then abandoned. Stones under the capstone? Of course there were stones under the capstone -- there are stones everywhere. Sorry -- still no evidence that the monster stone was actually moved.