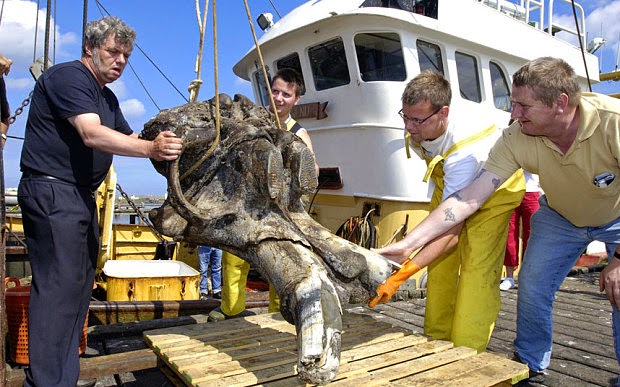 Mammoth skull being taken ashore in the Netherlands, having been fished up from the floor of the North Sea.  Apparently there are lots of bits and pieces out there........ fishermen keep on dredging them up....

Fossil hunters searching for ancient relics have found the skeleton of a 40,000-year-old woolly mammoth in North Sea.
The team of archaeologists, salvagers and palaeontologists trawled the waters off the east coast of Britain at a depth of 100 feet.
North Sea Fossils, who are based in Urk, Netherlands, include an expert they call "Mr Mammoth" and are in search of the remains of extinct animals in the dark depths.
Bones of animals including woolly rhinos, Irish elks and parts of the male skeleton of an 11-foot tall woolly mammoth, including its skull and tusks, have all been brought up and collected.
A prehistoric skull of a European bison, also known as a Wisent, was also discovered lying on the North Sea bed.
Carbon dating tests revealed the bones belonged to a mammoth that roamed the planet around 40,000 years ago.
Markus Broch, who works at North Sea Fossils, said it is "extremely rare" to find and later assemble a complete mammoth skeleton.
Mr Broch said: "During the Ice Age there was no sea between Holland and England and these great beasts roamed and died there.
"That is why their bones are still found by boats fishing in the North Sea.
"My father-in-law, who is a fisherman, started collecting these bones at young age because he was fascinated by them, and has now assembled a very large collection
"We started selling duplicates from his collection online some years ago, which went so well that our business have grown and grown.
"Most weeks we go to the fishing ports to meet the fishing vessels and buy the fossils they caught.
"Sometimes we charter a boat of our own and go for special 'fossil hunting' expeditions.
"Because we see so many fossils we work very closely with the leading experts in the field, such as Dick Mol, who is the world's leading authority on mammoths.
"We have assembled a number of complete skeletons of mammoths, something very few companies in the world can do."
The salvagers have managed to piece together the entire mammoth skeleton after initially discovering the skull and tusks of the animal in 2012.
The firm travelled out to sea and recovered a stash of other mammoth fossils using deep sea trawler nets before piecing them together at their base in Urk.
Other items found by the firm include parts of sabre-toothed tigers, the skull of a woolly rhino and the cranium of a reindeer.
Mammoths were first described in 1799 by Johann Friedrich Blumenback, a German scientist.
He gave the name Elephas primigenius to elephant-like bones found in Europe.
The bones belonged to the woolly mammoth which was later considered to be a distinct genus and renamed Mamuthus primigenus.
The species found by North Sea Fossils were known to roam through parts of Central Europe around 40,000 years ago.
Posted by BRIAN JOHN at 11:55