This story from the Telegraph has been all over the place for the past few days.  It's an old story, apart from the new interest in the tunnel..........

"British History may well have to be rewritten" etc etc..... burble burble.......  haven't we heard all that before, hundreds of times?  This is clearly not just about David Cameron or a tunnel.  What's going on here?  Who's behind it?  The Amesbury Chamber of Trade? 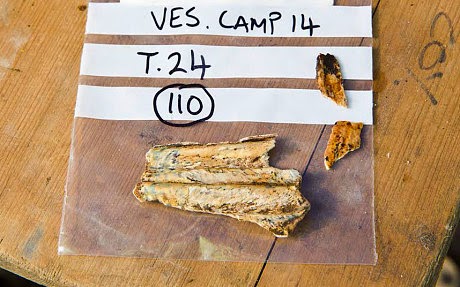 Archaeologists have discovered the earliest settlement at Stonehenge - but the Mesolithic camp could be destroyed if government plans for a new tunnel go ahead.


Charcoal dug up from the ‘Blick Mead’ encampment, a mile and a half from Stonehenge, dates from around 4,000BC. It is thought the site was originally occupied by hunter gatherers returning to Britain after the Ice Age, when the country was still connected to the continent.

Experts say the discovery could re-write history in prehistoric Britain.

There is also evidence of feasting - burnt flints and remains of giant bulls – aurochs – as well as flint tools.

The dig has also unearthed evidence of possible structures, but the site could be destroyed if plans for a 1.8 mile tunnel go ahead.

Earlier this month David Cameron, the prime minister, visited Stonehenge, in Amesbury, Wiltshire and announced plans to duel the A303 and build a new tunnel to take traffic away from the world heritage site.

But archaeologists want more time to assess the importance of the site and record new findings.

"The PM is interested in re-election in 140 days - we are interested in discovering how our ancestors lived six thousand years ago,” said archaeologist David Jacques, who made the discovery on a dig for the University of Buckingham.

“British pre-History may have to be rewritten. This is the latest dated Mesolithic encampment ever found in the UK.

“Blick Mead site connects the early hunter gatherer groups returning to Britain after the Ice Age to the Stonehenge area all the way through to the Neolithic in the late 5th Millennium BC.

“Britain is beginning across this time period. Blick Mead connects a time when the country was still joined to the mainland to it becoming the British Isles for the first time.”

The experts believe that the site could show the Stonehenge was built as a monument to the ancestors of Neolithic Britons.

“Our only chance to find out about the earliest chapter of Britain’s history could be wrecked if the tunnel goes ahead,” added Mr Jacques.

A previous dig at the site, led by the University of Buckingham, revealed Amesbury is the longest continually-occupied place in the country. They discovered that frogs’ legs from 7,000 years ago were a delicacy here long before the French took a liking to them.

Archaeologists believe that early Britons were drawn to the site because of a natural spring. A The combination of a water of a constant temperature and a rare algae also produced the only colour-changing stones, which change from brown to pink, found at any archaeological site in the country.

Professor Tim Darvill, of Bournemouth University has described this as “This is the most important discovery at Stonehenge in over 60 years.”

Experts are calling on the government to rethink plans to build on the critically important landscape.

Andy Rhind-Tutt, of Amesbury and chairman of the Amesbury Museum and Heritage Trust, added: “Traffic congestion to one of the country’s most visited attractions will not be solved by a tunnel with one exit lane – the current tailback can extend five miles and can take two hours to get through.

“Any tunnel would need to be motorway standard, and even with four lanes there would still be tailbacks.

“A much more practical solution would be to reroute the A303 supporting South Wiltshire as well as the West Country.”
Posted by BRIAN JOHN at 21:31

Its been A place for dying, a place of healing, A navigation mark for UFO's, a giant Neolithic yacht marina.

Now this lot are saying, its just a boring old monument!

Come on chaps, where's your sense of fun? Surely you've got more imagination than that!

What I find significant is the focus upon the Mesolithic springhead site at Blick Mead, with its (currently Seasonal) Feasting, which seems to have gone on, or at any rate on and off, for Millenia: a bit like the Tunnel proposals, first mentioned by Geoffrey of Monmouth, or was it those Straight - Road Thinking Romans?

What we have, over the Blick Mead
digs and the recent, politically and electorally - tinged Tunnel talks, that is of particular interest to us Blue - Stonian Bloggers, is no less than an Archaeological Alliance between the University of
Bournemouth (Tim Darvill in the green corner) and the University of Buckingham/ Open University (David Jacques in the red corner, oh, and an elder statesman, Geoffrey Wainwright, in a rather fetching yellow
reflective
jacket, representing the dyed - in - the - wool Our Boyos Shifted The Stonehenge Bluestones By Themselves With No 'elp From Glaciers, See?
Long, Long Ago Party.

Current Archaeology Magazine had this to say about some of the detail of the Blick Mead, Amesbury Mesolithic dig, in its article dated April 19th 2013.I am quoting the bits I feel are relevant to us here on this Blog, particularly in view of us having read, a few weeks ago in an earlier Post from Brian, that Darvill & Wainwright are, some would say grimly, hanging on to their beliefs that MESOLITHIC QUARRYING took place at CARN MEINI in Preseli.

A small worked slate point, shaped like a microlith was uncovered at Blick Mead. Described as "the only prehistoric slate tool we know of ever discovered in the UK." Tim Darvill described it as a kind of metamudstone, which makes the tool more durable.
"We are still trying to determine the provenance of the stone. There is no slate in the Stonehenge area - indeed the nearest source we know of is in N Wales. It could have been fashioned from a glacial erratic, though we are not aware of any such slate erratics in the vicinity. The alternative is that this points to a significant movement of people and ideas........pre - dating what went on at Stonehenge by thousands of years"

Not so much hanging on grimly as requiring a grimoire to conjure up such a fantastique set of wide-ranging relationships.I hope we are not wandering into the realms of philology with its strict rules.
M

Rerouting the road would be best. The entire area is one site, but building a short tunnel in the heart of the landscape might damage more than it saves however well intentioned. The archaeologists need to link up stonehenge and Avebury and the other sites in this area. I do not understand why they consider the sites to be separate while we know thousands of people were working more or less simultaneously on Silbury and the SH sarsens.