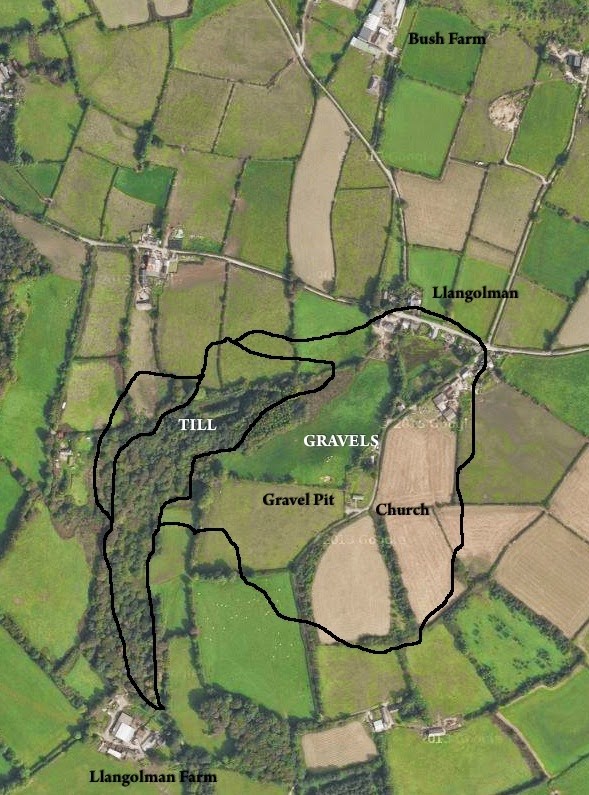 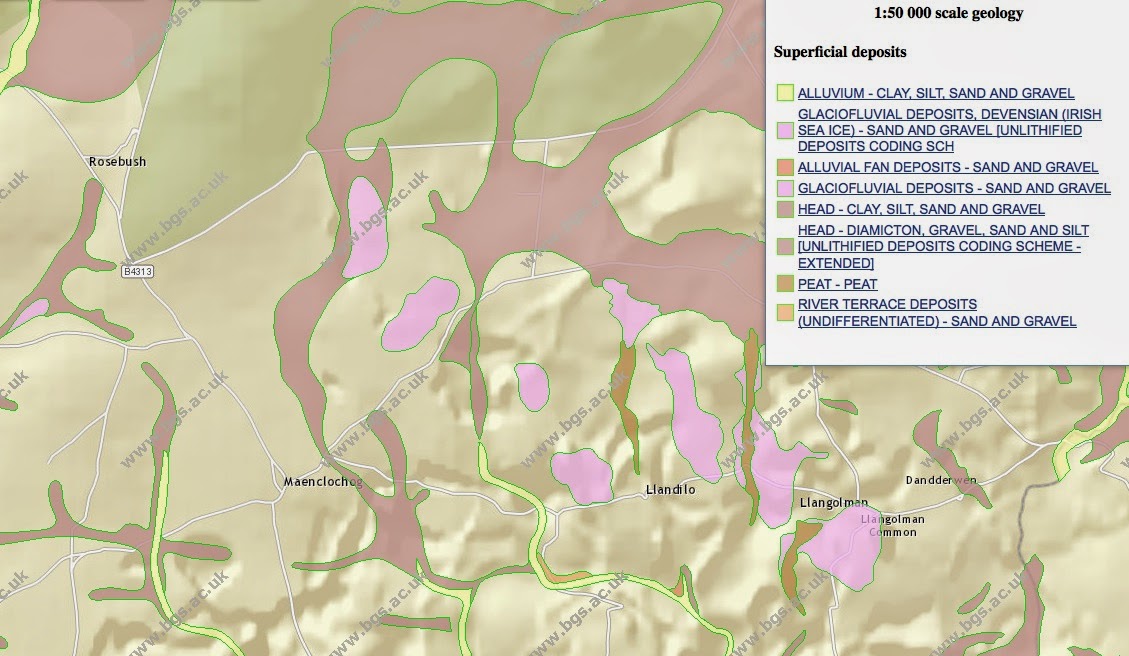 One of the great things about a blog like this is that occasionally somebody discovers it and makes a contribution out of the blue -- and one thing leads to another........

Following a comment from Herbert Sauro, I checked out the Wikipedia page on Llangolman, and found this:

From the Wikipedia page on Llangolman:

The area surrounding the village is riddled with steep wooded valleys, presumably cut during one or more of the glacial episodes of the Pleistocene. The village itself sits on a plateau where two valleys meet, the Eastern Cleddau and a tributary that originates near the small village of Llandelio. The underlying geology consists of interbedded Ordovician shales and sandstones with extensive slate outcrops. Evidence of glaciation is also seen from banks of gravel and sand situated to the east of the village which form deep drainage seeps from which discharges excellent spring water.
The springs emerge in boggy land at the base of the gravel banks where deposits of blue boulder clay, known by the natives as "indiarubber clay"can also be found. Clay pits close to the farm houses of Llangolman Farm (still visible) and Llyn are evidence that the clay was extracted on a significant scale at some time in the past. The study by Jehu mentions that the clay pit at Llyn was down to a depth of 15 to 20 feet and ladders were required to get in and out. His report goes on to state that the clay is bluish in color and very tough (hence the nickname indiarubber clay). The clay covers the valley bottom from Llyn to Llangolman Farm at a level of over 400 ft.

Then I dug into my ancient box file of references and found Jehu's seminal paper -- which I used extensively during my own doctorate research.  It was written in 1906, and contains much information on the glacial deposits on the southern flank of Preseli.

I look forward to visiting the pit again with Huw Absalom, with a digger in attendance, to see just how thick these gravels are and whether there may be any flowtills exposed lower in the gravel sequence.   But Herbert has offered to show me some of the places where he recalls till being exposed in the valley.  I have drawn a line roughly around the extent of the till exposure on the air photo above.  The little wooded valley in which it occurs may or may not be an ancient part of the Eastern Cleddau drainage system, since we don't know what the bedrock contours are in this area.  My impression is that the patches of sands and gravels that stretch from Llangolman north-westwards towards Rosebush have a slightly hummocky appearance in places not because they are Devensian dead-ice features (as in the Moylgrove- Cardigan area) but because they have been deeply eroded over hundreds of thousands of years.  If (as I believe) the fluvio-glacial materials are of Anglian age, what we see today may be all that is left of an extensive spread of gravels dating from the ice wastage of the Irish Sea Glacier.

The wooded valley that runs from Llangolman Village towards Llangolman Farm is a strange feature carrying a very small stream and some springs.  Could it have been cut by a snowmelt stream during the Wolstonian or Devensian?  Such a stream could have cut down through the gravels to expose a thick lodgement till beneath.  This till must also be of Anglian age.

For years I have been very sceptical about the idea proposed by Juhu and other early geologists that there were two till deposits in Pembrokeshire, labelled "Older Drift" and "Newer Drift".  I'm still convinced that Jehu and Charlesworth mis-labelled many deposits as "Older Drift" which are in fact Devensian in age, particularly in NW Pembrokeshire -- but things are getting clearer, and I am becoming rather sure that there ARE indeed patches of OLDER DRIFT OF ANGLIAN AGE to be found -- perhaps almost exclusively on the southern flanks of Preseli.